Zoom faced its first big test of the school year on Monday, as many teachers in the US turned to the video conferencing service as a vital teaching aid during the pandemic.

The verdict, at least for many on the east coast of the US: a resounding F.

Zoom, which has risen to global fame this year thanks to its success at facilitating working and learning from home, suffered one of its most prominent service failures, with reports that users were having trouble logging on soon after 8am local time.

Many schools affected were beginning the academic year totally reliant on remote classes, and the problems were also reported by many business users as well as courts in the US that have turned to Zoom to keep the wheels of justice turning.

Some international users also said they had also been unable to sign in.

Zoom said about three hours later that it had started to deploy a fix for the problem, which had stopped some users being authenticated when they tried to log in through the website and prevented them starting and joining meetings and webinars. It added soon after that it had restored service for “most users”, though some were still affected.

Zoom’s offer to schools of free access to the enterprise-grade version of its video conferencing service in March this year was one of the quick responses to the health crisis that made it a household name.

The company’s ability to handle huge increases of traffic as it grew — what tech companies call “scaling up” — was seen as one of its key assets, putting it on an equal footing with services from tech giants such as Google and Microsoft.

Zoom relies on Amazon Web Services, the largest provider of cloud computing infrastructure, and earlier this year added Oracle as a second cloud supplier to try to meet surging demand. 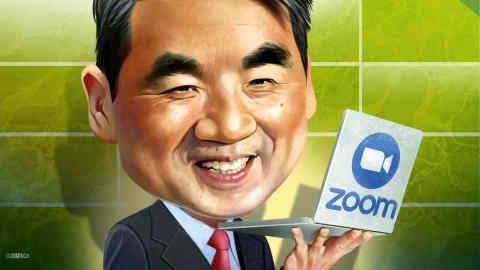 It warned in an official filing in May that “interruptions, delays or outages” caused by surging usage — including because of Covid-19 — could lead to financial penalties and hit its business. It said at the time that a software implementation — a common cause of disruption in online services — had led to problems for some users in May, and it warned that shifting data between different data centres as it grew could hit its service.

Zoom’s shares were down about 2 per cent on Monday on a positive day for most other tech stocks. However, they are up more than 170 per cent since the pandemic first hit share prices in late February.

While service quality has not been a widespread issue until now, Zoom ran into a barrage of problems when it first threw open its virtual doors to an audience beyond its original target market of business users.

Teachers and others untrained in how to organise meetings failed to lock down their sessions and many were hit by “Zoom bombing”, as unauthorised users disrupted their meetings. Wider use also brought unflattering scrutiny of Zoom’s security and privacy weaknesses.