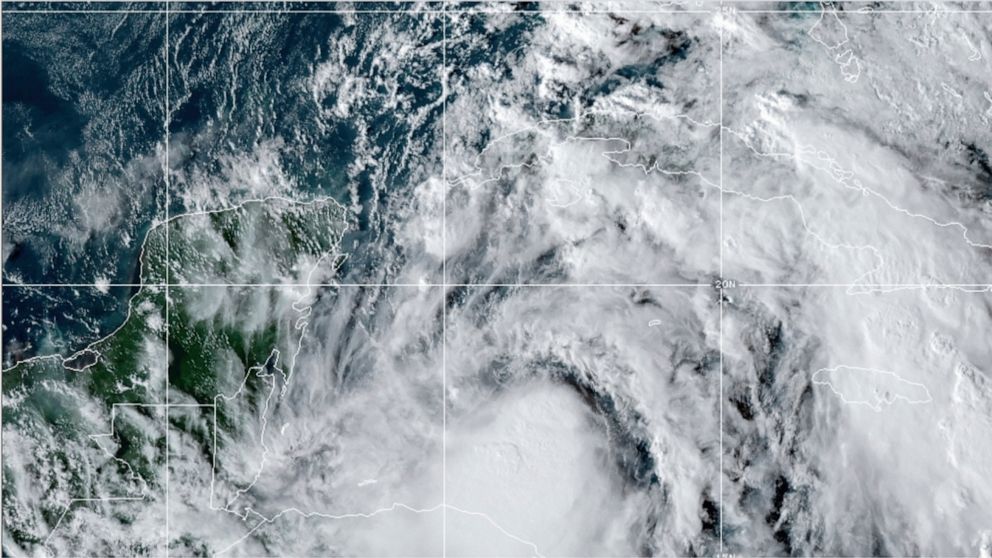 NEW ORLEANS — Hurricane Zeta was speeding toward storm-weary Louisiana and intensifying, with landfall expected as a Category 2 hurricane Wednesday afternoon. New Orleans, where a pump system failure has raised flood risks, was squarely in its way.

Life-threatening storm surge and strong winds were expected beginning around midday along the U.S. Gulf Coast, where residents braced for the 27th named storm of a historically busy Atlantic hurricane season.

Louisiana has had the worst of it, hit by two tropical storms and two hurricanes. New Orleans has been in the warning area for potential tropical cyclones seven times this year, each one veering to the east or west.

“I don’t think we’re going to be as lucky with this one,” city emergency director Collin Arnold said.

Zeta had been predicted to hit as a relatively weak Category 1 hurricane, but Louisiana residents awoke to updated forecasts predicting a Category 2, with top winds of nearly 100 mph (160 kph) at landfall.

“The confidence is becoming very high that the southeastern part of Louisiana and coastal Mississippi are going to see some significant impacts from this storm,” said meteorologist Shawn O’Neil of the National Weather Service in New Orleans.

“The good news for us -– and look, you take good news where you can find it –- the storm’s forward speed is 17 mph. That’s projected to increase, and so it’s going to get in and out of the area relatively quickly, and then we’re going to be able to assess the damage more quickly,” Gov. John Bel Edwards said in an interview on The Weather Channel.

While state and city officials urged people to take precautions and prepare to shelter in place, there were few signs of concern in New Orleans. Uptown, there were only a few boarded windows, and it was business as usual in the French Quarter. “This one is moving fast and I don’t think it’s going to do much,” said Kelly Ann, a visitor from St. Petersburg, Florida, as she strolled Decatur Street.

Winds picked up and water rose above the docks in Lafitte, a small community south of New Orleans that takes its name from a French pirate. Workers drove truckloads of sandbags to low-lying areas of the town, where thousands of sandbags already lined bayous and roadways after previous storms this season.

New Orleans officials announced that a turbine that generates power to the city’s aging drainage pump system broke down on Sunday, with no quick repair in sight. There was enough power to keep the pumps operating if needed, but little excess power to tap if other turbines fail, officials said at a news conference with Mayor LaToya Cantrell.

Officials said they were running through contingencies to provide power and make repairs where needed should there be other equipment problems. Forecasts called for anywhere from 2 to 6 inches (5 to 15 centimeters) of rain to fall in the New Orleans area, but Zeta is expected to be a relatively fast-moving storm, possibly mitigating the flood threat.

Zeta raked across Mexico’s Yucatan Peninsula Tuesday, toppling trees and briefly cutting power to more than 300,000 people but causing no deaths, before strengthening again along a path slightly east of Hurricane Laura, which was blamed for at least 27 Louisiana deaths after it struck in August, and Hurricane Delta, which exacerbated Laura’s damage in the same area just weeks later.

By late Wednesday morning, Zeta’s top winds had grown to 90 mph (150 kph) and its forward movement increased to 18 mph (28 kph) as its center moved north, about 235 miles (380 kilometers) south of New Orleans.

Hurricane warnings stretched from Morgan City, Louisiana to the Alabama/Mississippi state line, including Lake Pontchartrain and metropolitan New Orleans. Tropical storm warnings were in effect for the western Florida Panhandle, forcing early-voting sites to close for hours in three counties where Republicans dominate.

The center of Zeta should make landfall in southeastern Louisiana in the afternoon, then move over Mississippi in the evening before crossing the southeastern and eastern United States on Thursday, the hurricane center said.

Edwards asked President Donald Trump for a disaster declaration ahead of the storm. He and Alabama Gov. Kay Ivey both declared emergencies, as did Mayor Andrew “FoFo” Gilich in Biloxi, Mississippi. Trump declared an emergency for Louisiana Tuesday evening.

Zeta broke the previous record for a 27th named Atlantic storm, taking shape more than a month before that one on Nov. 29, 2005. It’s also this season’s 11th hurricane. An average season sees six hurricanes and 12 named storms.

The extraordinarily busy hurricane season has focused attention on the role of climate change, which scientists say is causing wetter, stronger and more destructive storms.

With yet another storm approaching, worries accumulated for people left homeless. The state is sheltering about 3,600 evacuees from Laura and Delta, most in New Orleans area hotels.

Meanwhile, many along the coast renewed an unwanted ritual of preparation.

“I’ve never seen anything like it,” said Thomas Hymel, an extension agent in Jeanerette with the LSU Agricultural Center. He said the storms have meant more than a month of down time for seafood harvesters, many of whom are already suffering a drop in demand from restaurants due to the coronavirus pandemic.

This story has been corrected. The New Orleans emergency director’s surname is Arnold.