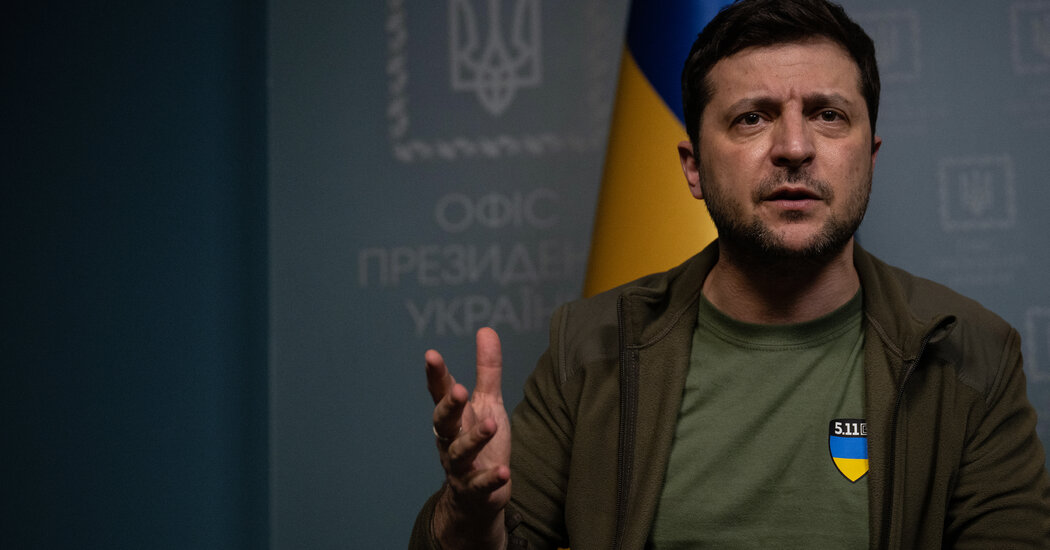 WASHINGTON — President Volodymyr Zelensky of Ukraine spoke with more than 300 members of Congress on Saturday, imploring them to ban the importation of Russian oil and to send more jets to his country, according to lawmakers on the call.

The meeting, conducted via Zoom, was the first time Mr. Zelensky had addressed both houses of Congress since Russia’s invasion of Ukraine.

During the call, Mr. Zelensky also reiterated one of his long-sought after demands: the imposition of a no-fly zone over Ukraine. Western governments have rebuffed the idea as all but impossible, citing the risk of direct conflict between NATO and Russian forces.

Mr. Zelensky told lawmakers that a ban on Russian oil would be “even more powerful” than removing some Russian banks from the SWIFT financial messaging system, according to Senator Dan Sullivan, Republican of Alaska. This past week, Republicans and Democrats ratcheted up pressure on the White House to prohibit the importation of Russian energy products, even though experts have said such a move would be largely symbolic.

Lawmakers have also been urging the administration to ship more military equipment to arm the Ukrainians, even after Mr. Biden last weekend authorized the shipment of a $350 million package of weapons to the country, a package that represented the largest single authorized transfer of arms from U.S. military warehouses to another country. On Saturday, Mr. Zelensky stressed the need for additional planes and drones in the absence of a NATO-led no-fly zone, lawmakers on the call said.

His plea came after Poland, Bulgaria and Slovakia said they would not send fighter jets to Ukraine.

“Zelensky’s message is simple: ‘Close the skies or give us planes,’” Senator Ben Sasse, Republican of Nebraska, said in a statement after the meeting. “Let’s be cleareyed about our options: A no-fly zone means sending American pilots into combat against Russian jets and air defenses — in a battle between nuclear powers that could spiral out of control quickly.”

Senator Chuck Schumer, Democrat of New York and the majority leader, also pledged to Mr. Zelensky during the call that he and Senator Mitch McConnell, Republican of Kentucky and the minority leader, were working “very hard in bipartisan fashion” to quickly approve a $10 billion aid package to Ukraine, as requested by the Biden administration this past week.

“President Zelensky made a desperate plea for Eastern European countries to provide Russian-made planes to Ukraine,” Mr. Schumer said in a statement. “These planes are very much needed. And I will do all I can to help the administration to facilitate their transfer.”