Public health experts from Yale and Harvard have created a site that ranks colleges on their COVID-19 dashboards and how well they keep their communities informed on cases with both of the Ivy League schools receiving top grades.

The site We Rate COVID Dashboards was founded by researchers from major universities including Harvard and Yale as students started returning to campuses across the country.

The researchers have been issuing grades based on whether colleges in the United States have COVID-19 dashboards.

They rank the colleges on how frequently they report COVID-19 data and how detailed that information is, including if it differentiates cases in students and teachers.

Yale and Harvard are among just a handful of colleges that have received an A grade.

One of the other researchers involved is from Baylor University in Texas, which received a B ranking by the site. 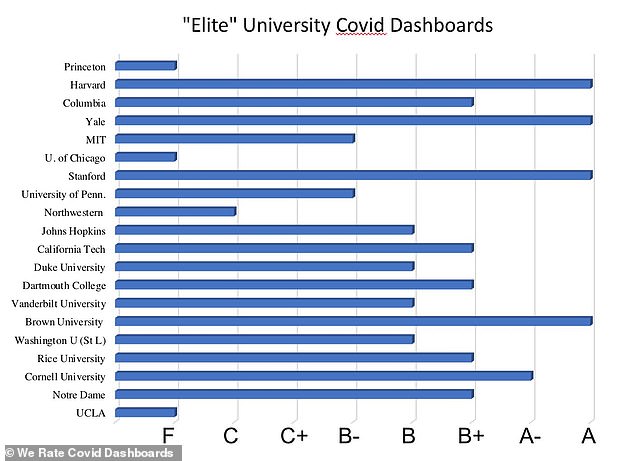 The site We Rate COVID Dashboards, which was founded by researchers from major universities including Harvard and Yale, ranks the COVID-19 dashboards of various colleges

Johns Hopkins University, which has become a global leading source for COVID-19 data, was given an F from the site.

The Baltimore-based school failed, according to the site, because it does not currently have a dashboard for its campus.

John Hopkins built a dashboard early on in the coronavirus pandemic that is cited by health officials globally.

It continues to track global COVID-19 infections and deaths and provides state-by-state breakdowns for cases in the United States.

Princeton and UCLA also failed for not having COVID-19 related dashboards, according to the site.

Meanwhile, Yale’s report card notes the dashboard is easy to read and data is updated daily. The data includes positive cases and testing numbers. The school’s dashboard is also praised for reporting student and teacher data separately, as well as county data trends.

Harvard’s grade was based on similar findings, according to the site, but was also praised for displaying the number of students in isolation or quarantine status on campus.

The site notes that its ranking system is an ongoing work in progress and they are working to rank even more schools.

They also change rankings if schools made changes to their respective dashboards. 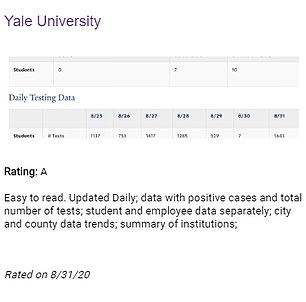 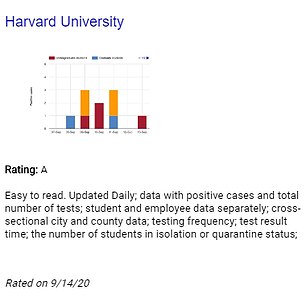 Yale’s report card notes the dashboard is easy to read and data is updated daily. Harvard’s grade was based on similar findings 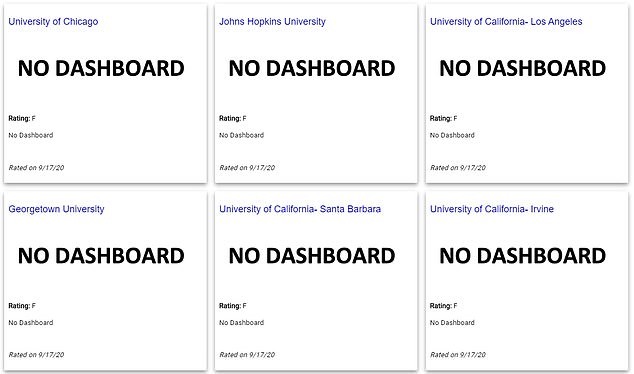 Johns Hopkins University, which has become a global leading source for COVID-19 data, was given an F from the site. Princeton and UCLA also failed for not having COVID-19 related dashboards, according to the site

It comes as an Associated Press analysis found that among the 50 US counties with the highest concentrations of students and overall populations of at least 50,000, 20 have consistently reported higher rates of new virus cases than their states have since September 1.

On average, infection rates in those 20 counties have been more than three times higher than their states’ overall rates.

Health officials fear that surges among college students will spread to more vulnerable people – older ones and those with underlying health problems – and trigger a new wave of cases and hospitalizations.

Some worry that colleges could overwhelm hospitals already bracing for increasing cases of COVID-19 and flu this fall and winter.

While universities have emerged as hot spots in nearly every state, many of the worst outbreaks have been scattered across the South and Midwest. Of the 50 college counties analyzed by the AP, James Madison’s had the highest infection rate, followed by counties that are home to the University of Georgia, Florida State and Indiana University in Bloomington.

In the 10 counties with the highest infection rates, colleges have reported at least 15,000 cases among students and employees in recent weeks, though testing and reporting practices vary significantly and the actual number is probably much higher.

For many colleges, the return to campus was a carefully orchestrated process that took months to plan and millions of dollars to pull off. But as safe as they’ve made their campuses, many colleges have struggled to curb off-campus gatherings that have been tied to thousands of infections.

Parties were blamed for dozens of cases at the University of North Carolina at Chapel Hill, which brought students back in early August only to send them home weeks later.

Other schools have cracked down on parties and disciplined students. The University of Missouri in Columbia announced this week that it expelled two students and suspended three others for violating rules meant to slow the virus´s spread.

The outbreaks are increasingly straining relations between universities and their towns. 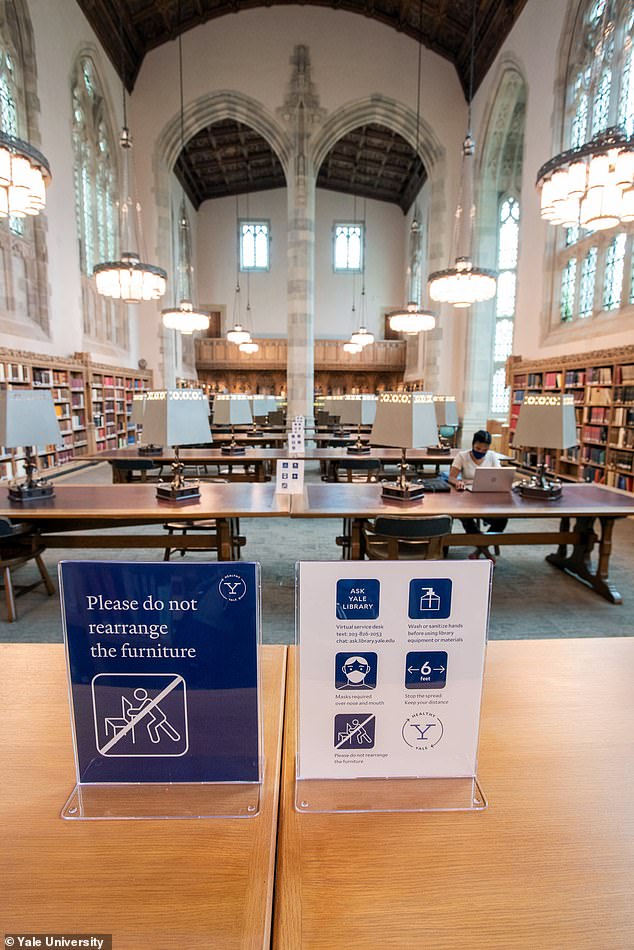 The site We Rate COVID Dashboards was founded by researchers from major universities including Harvard and Yale as students started returning to campuses across the country. Pictured is the library at Yale University with social distancing measures in place

Amid a spike in cases at the University of Colorado at Boulder, county health authorities Tuesday urged all students to quarantine for two weeks. Students and others at the university have accounted for 76 percent of the county’s 663 positive cases over the past two weeks, officials said.

At Miami University in Ohio, county health authorities ordered all of the school’s athletes to isolate for 14 days last month after 27 tested positive for the virus. Last week, local police cited six men at an off-campus house party that included several students who had recently tested positive.

As cases increase at Boston College and the campus runs out of quarantine space, the mayor of nearby Newton is asking the school not to use any of the town’s hotels or other property to isolate students.

Some cities have tightened rules at bars to discourage students from gathering. As cases surged at Illinois State, the town´s mayor issued an order requiring all bar customers to be seated to be served. He also limited gatherings near campus to no more than 10 people.

While some colleges have sent students home amid outbreaks, many others are digging in. Some have moved classes online but urged students to stay where they are until cases drop. Among them is the University of Notre Dame, which paused in-person classes August 18 and moved them online amid a surge that saw as many as 89 new cases per day. Weeks later, after a sharp decrease in infections, classes have started to resume on campus.

Education Secretary Betsy DeVos has also endorsed Notre Dame’s approach, saying colleges that ‘work through it’ and find ways to isolate infected students are more likely to ‘end up in the best place.’