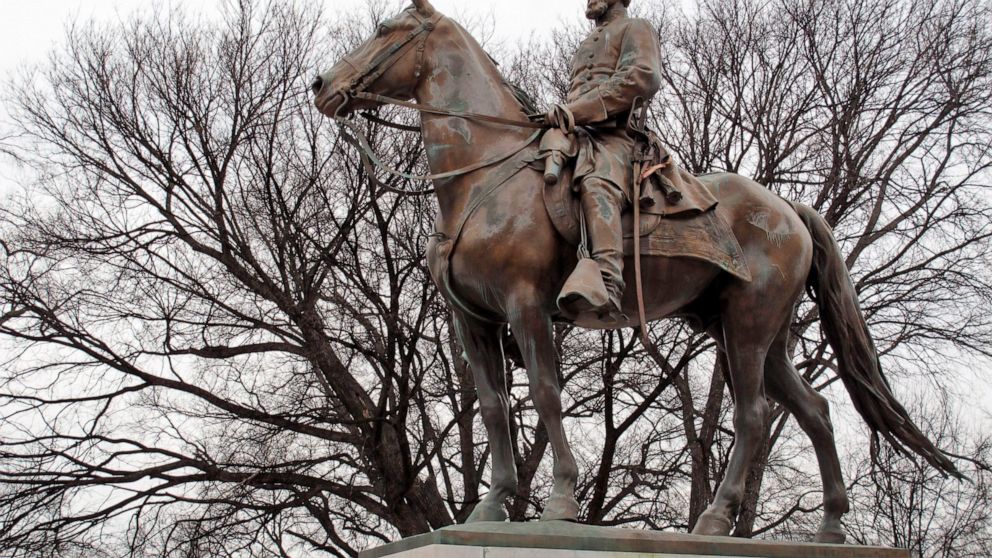 Workers in Memphis, Tennessee, have begun the process of digging up the remains of Confederate Gen. Nathan Bedford Forrest

MEMPHIS, Tenn. — Workers arrived at a Tennessee park Tuesday to begin the process of digging up the remains of Confederate Gen. Nathan Bedford Forrest and moving the former slave trader’s body from its longtime resting place in Memphis to a museum hundreds of miles away.

Crews prepared to remove the graves of Forrest and his wife from Health Sciences Park in Memphis’ busy medical district. The park used to bear the name of the early Ku Klux Klan leader and feature a statue of the cavalryman on a horse, but the name has been changed and the statue removed in recent years.

Workers must dismantle the statue’s pedestal before they can disinter the Forrests’ remains and move them to a Confederate museum in Middle Tennessee. A heavy crane was positioned nearby as workers began taking apart the pedestal Tuesday. The entire process could take weeks.

With the approval of Forrest’s relatives, the Sons of Confederate Veterans is overseeing the move. A judge approved it late last year, ending a long legal battle.

It is another example of how cities and activists have taken steps in recent years to get rid of statues and monuments of historical figures who supported the South’s secession and led the fight against the North, from Gen. Robert E. Lee to Jefferson Davis, the president of the Confederacy.

Forrest sold slaves in Memphis and served in the Confederate army as a cavalry general. In April 1864, Forrest’s troops attacked Fort Pillow in northwest Tennessee and killed 200 to 300 Union soldiers, most of them Black.

Forrest was later accused of massacring the Union soldiers. Questions linger about whether they were killed as they tried to surrender. Northern newspaper reports referred to the battle as an atrocity.

Historians say he later became an early leader of the Ku Klux Klan, though some of Forrest’s supporters dispute that. Forrest’s critics call him a violent racist.

The remains of Forrest and his wife were moved from a Memphis cemetery and buried under the statue of the former Memphis City Council member in 1904. The city took down the statue in December 2017 after selling the public park to a nonprofit group, thus circumventing a state law barring the removal of historic monuments from public areas.

A judge in Nashville ruled that the city and Memphis Greenspace, the nonprofit that made the park privately operated, removed the statue legally.

The remains will be reburied and the statue placed at the National Confederate Museum at Elm Springs in Columbia, according to an affidavit from Bedford Forrest Myers, a great-great-grandson. Owned by the Sons of the Confederate Veterans, the museum opened to the public in October. It is located about 200 miles (320 kilometers) from Memphis.

The park where Forrest was buried has been the site of protests associated with the Black Lives Matter movement. Activists have long called for the removal of both the statue and the remains. The words “Black Lives Matter” have been painted in yellow by activists on a walkway surrounding the tomb.

“Relocating the graves is proper because the Property has lost its character as a burial ground,” Myers wrote in a legal filing.

The tree-lined park is next to the University of Tennessee’s medical school and a community college on Union Avenue, a busy street leading in and out of downtown Memphis.