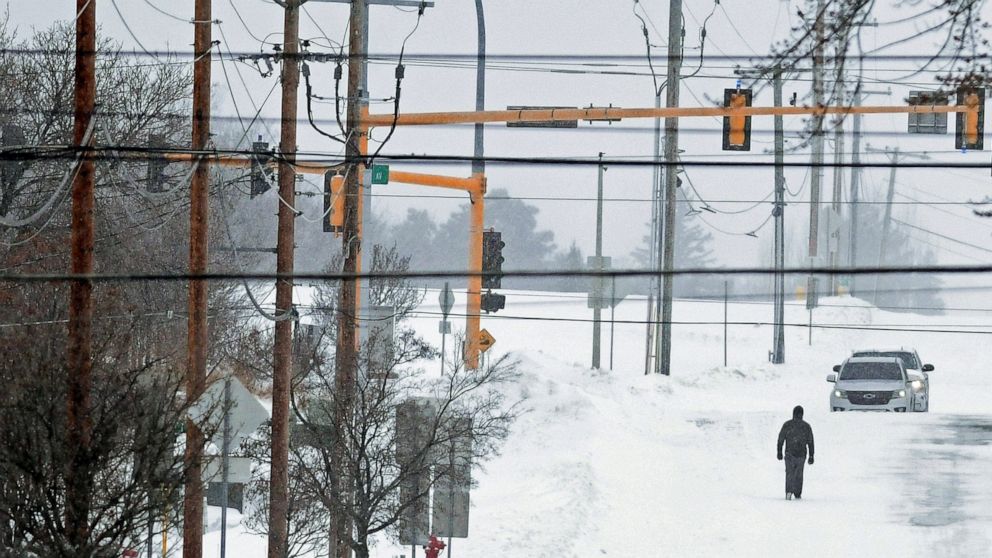 RISON, Ark. — A 20-year-old Arkansas woman was killed when a tree fell on her home as severe storms swept through the state and a possible tornado ripped roofs off homes in Alabama, officials said.

The woman’s death occurred Wednesday as part of a multiday severe weather outbreak that caused tornadoes, powerful winds and huge hail in parts of the central and southern United States.

A possible tornado tore roofs off homes in a public housing community and peppered cars with debris Wednesday night in rural Greene County, Alabama, located about 90 miles (145 kilometers) southwest of Birmingham. Billy Hicks, who lives in the area, told WBMA-TV he was lying down when he heard a rush of wind that lasted only a few seconds.

“I jumped up and put my clothes on, put my shoes on when everything was over with. I come to the side door and looked across the street. I knew that something had hit all these houses,” said Hicks, who got in his car to go check on neighbors.

Authorities swarmed the area but didn’t find anyone who was hurt, said Zac Bolding of Greene County Emergency Medical Services.

“Most of the people we talked to as we were doing a house-to-house search explained that they were in their bathroom or an interior hallway, so they were listening to those warnings and without that I think we would have been looking at a much different situation,” he said.

In Arkansas, the woman was died when a tree toppled on her home in Rison shortly after 4:30 p.m. Wednesday, pinning her to the couch, said Stephen McClellan, Cleveland County’s emergency management coordinator. Rison is about 55 miles (90 kilometers) south of Little Rock.

A day earlier, 23 people were injured in the central Texas town of Salado. The National Weather Service in Fort Worth said Wednesday that the twister was rated an EF3 with peak wind speeds of 165 mph (265 kph).

Tornadoes were also reported Tuesday in parts of Iowa and Minnesota. Residents in the small southeastern Minnesota farming community of Taopi were cleaning up after a devastating tornado destroyed half of the town’s homes, toppled tall trees and left piles of debris.

A tornado that was rated EF2 with peak wind speeds of 130 mph (209 kph) struck Taopi near the Iowa border late Tuesday night, tearing the roofs off houses, overturning vehicles and bringing down power lines. There were no reports of serious injuries.

Volunteers arrived Wednesday to help residents clean up the debris in the community of about 80 people. Family members sifted through rubble looking for keepsakes.

“Half the town is gone,” City Clerk Jim Kiefer said. Of Taopi’s 22 homes, at least 10 are beyond repair, with roofs and walls missing, he said. Kiefer said his house is OK, but his mother’s home is a total loss.

Also, a blizzard struck North Dakota this week, closing the state Capitol, schools, government offices and some businesses for a third day Thursday.

The National Weather Service’s blizzard warning for much of the state and smaller sections of South Dakota and Montana remained in effect Thursday. More than a foot of snow (30 centimeters) has fallen in Bismarck with about 2 feet (61 centimeters) in Dickinson and Glenburn.

“For the month of April it’s not uncommon to get the snow. Now, snow of this magnitude — this is something that’s a little bit more unique,” said Rick Krolak, at the weather service’s Bismarck office.