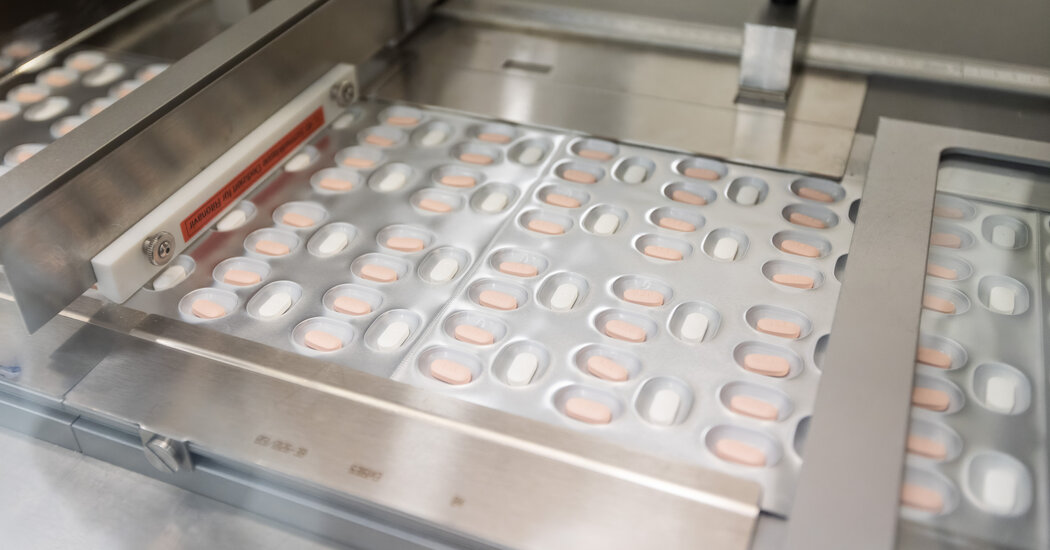 The White House on Thursday said it was introducing new models for distributing Paxlovid, the Covid-19 oral medication made by Pfizer, in an effort to get the treatment to more people and keep coronavirus death rates at relatively low levels even as cases increase.

The federal government will start reimbursing a clinic in Providence, R.I., for evaluating patients who test positive and immediately prescribing Paxlovid to those eligible for it — the first of what the White House said would be a series of federally supported sites, with others set to open in New York and Illinois. Federal workers are also being sent to state-run testing sites in Minnesota, transforming them into “test-to-treat” locations, the White House said.

“Fundamentally what we’re trying to do is get to a point where Covid deaths are largely preventable, and I think we’re pretty close to there,” Dr. Ashish K. Jha, the White House Covid-19 response coordinator, said in an interview Wednesday evening. “Deaths from this disease really should become increasingly rare.”

Significant obstacles persist in getting Paxlovid to everyone who could benefit from it; more than a million courses of Paxlovid purchased by the government are still available, according to data collected by the Department of Health and Human Services. Because of vague eligibility guidelines that are open to broad interpretation — the medication is authorized for people 12 and older with “mild-to-moderate” Covid-19 who are at risk of severe illness — some doctors are hesitant to prescribe the pill, or require extensive consultation.

As of Wednesday, the United States was averaging more than 110,000 new coronavirus cases each day, according to a New York Times database, about a 30 percent increase over the last two weeks. But that is believed to be a significant undercount, since Americans are increasingly relying on at-home tests and their cases are often going unreported. New deaths have been at an average of fewer than 400 a day over the past two weeks.

Dr. Jha attributed the more modest death rate to a combination of immunity in part conferred from vaccines, and the success of Paxlovid, which has been found to substantially reduce the chances of severe forms of Covid-19 in high-risk people if it is started early in the course of infection.

Federal health officials have continued to warn of the risks to especially vulnerable people, pleading with older Americans to stay up-to-date on vaccinations. Last week, the C.D.C. cited rising cases and hospitalizations in strengthening its second booster recommendation for people 50 and older. But Dr. Jha said that the current gulf between infection and death rates across the country amounted to a promising moment in the pandemic, when Covid-19 can be less deadly.

Dr. Jha said that Northeastern states, places that already had higher rates of vaccination, were using more of Paxlovid, and acknowledged that other places in the country could have different outcomes. Conditions appear to be stabilizing in some Northeastern states that were among the first to see a spring surge in cases. Though still high, case rates have started to level off or decline in New Jersey, New York and Rhode Island.

“What worries me is that as this virus spreads into other parts of the country that are both less boosted and so far have been using less Paxlovid — whether this phenomenon that we’re seeing, of infections not leading to a lot of hospitalizations and deaths, whether that will hold up or not,” Dr. Jha said.

The Food and Drug Administration “is looking at this and thinking about it,” he said. “Whether they’re going to make a change, when and how, etc., is totally in their wheelhouse.”

Many patients are still handling the sometimes-cumbersome steps on their own: locating a virus test, then securing a Paxlovid prescription from a health provider, then finding a pharmacy that carries the pill, all within days of first showing symptoms.

Dr. Jha described being frustrated by physician colleagues who have told him they still limit Paxlovid to patients 65 years and older.

Many locations in the government’s test-to-treat program are CVS MinuteClinics with in-house nurse practitioners and physician assistants who can prescribe the drug, a service that requires appointments and can be prohibitively expensive for those without health insurance.

Michael Ganio, senior director of pharmacy practice and quality at the American Society of Health-System Pharmacists, said the test-to-treat system was suffering from a lack of federal funding for covering Covid-19 care for the uninsured. He said that while the federally supported test-to-treat idea was limited in its reach, it could function as an important example for state and local officials to implement similar programs.

“I don’t think it’s possible for the federal government to stand up enough of these to ensure equitable access nationwide,” he said.

Still, with confirmed cases surging and more awareness and availability of Paxlovid, prescriptions have exploded in recent weeks, with 25,000 to 30,000 written daily, Dr. Jha said. More than 182,000 prescriptions for oral antiviral medications were filled last week, the White House said in a news release Thursday. Three-hundred more locations now qualify as test-to-treat sites compared to a month ago, and nearly 40,000 pharmacies and other locations now carry the antiviral pills.

Without stringent reporting requirements, the federal government is still struggling to understand who is receiving Paxlovid, data that could be key to knowing whether the most at-risk Americans, such as those in nursing homes, are getting the medication.

He said that federal officials should begin to get a more detailed picture in the coming weeks from some groups tracking who has received the drug, from the Department of Veterans Affairs, Kaiser Permanente and certain hospital systems. Researchers are also examining cases of apparent rebounding after taking Paxlovid, Dr. Jha said.

“My hope is that we’re going to see a lot of data in the next couple of weeks from a bunch of these organizations,” he said.