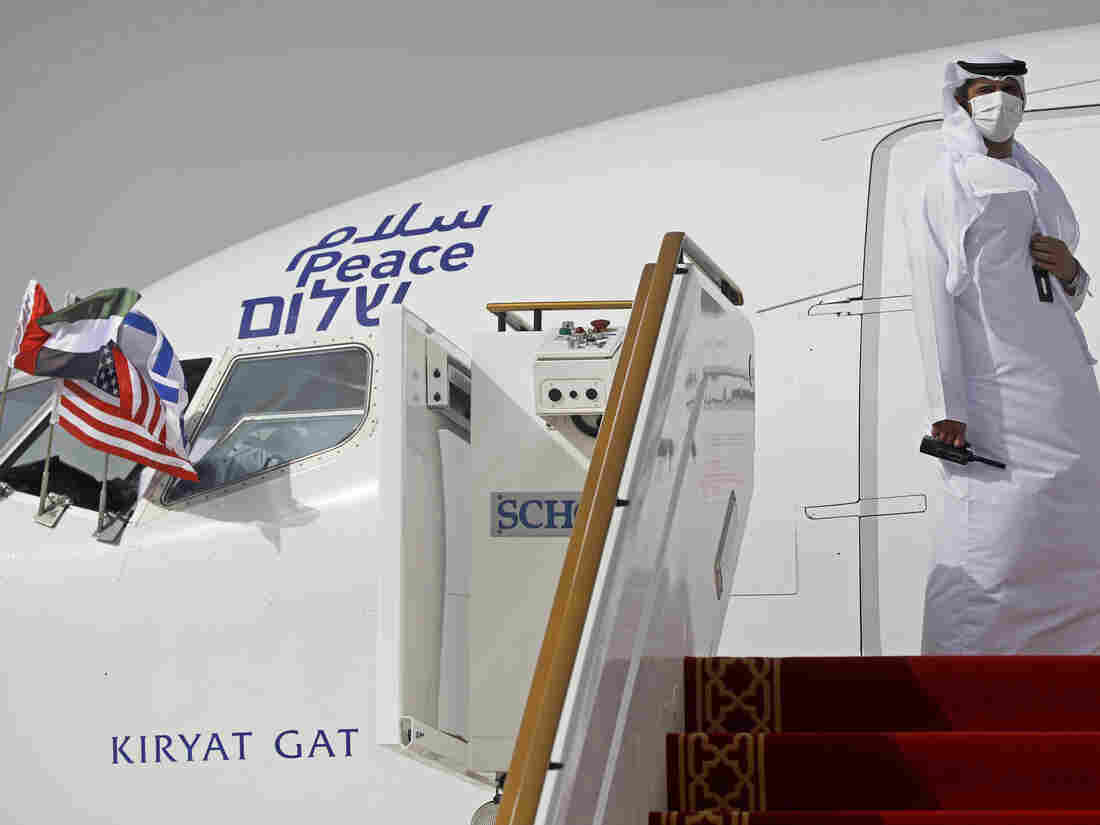 An official stands at the door of an Israeli El Al airliner after it landed in Abu Dhabi, United Arab Emirates, on Monday after flying in from Tel Aviv. Nir Elias/Pool Photo via AP hide caption 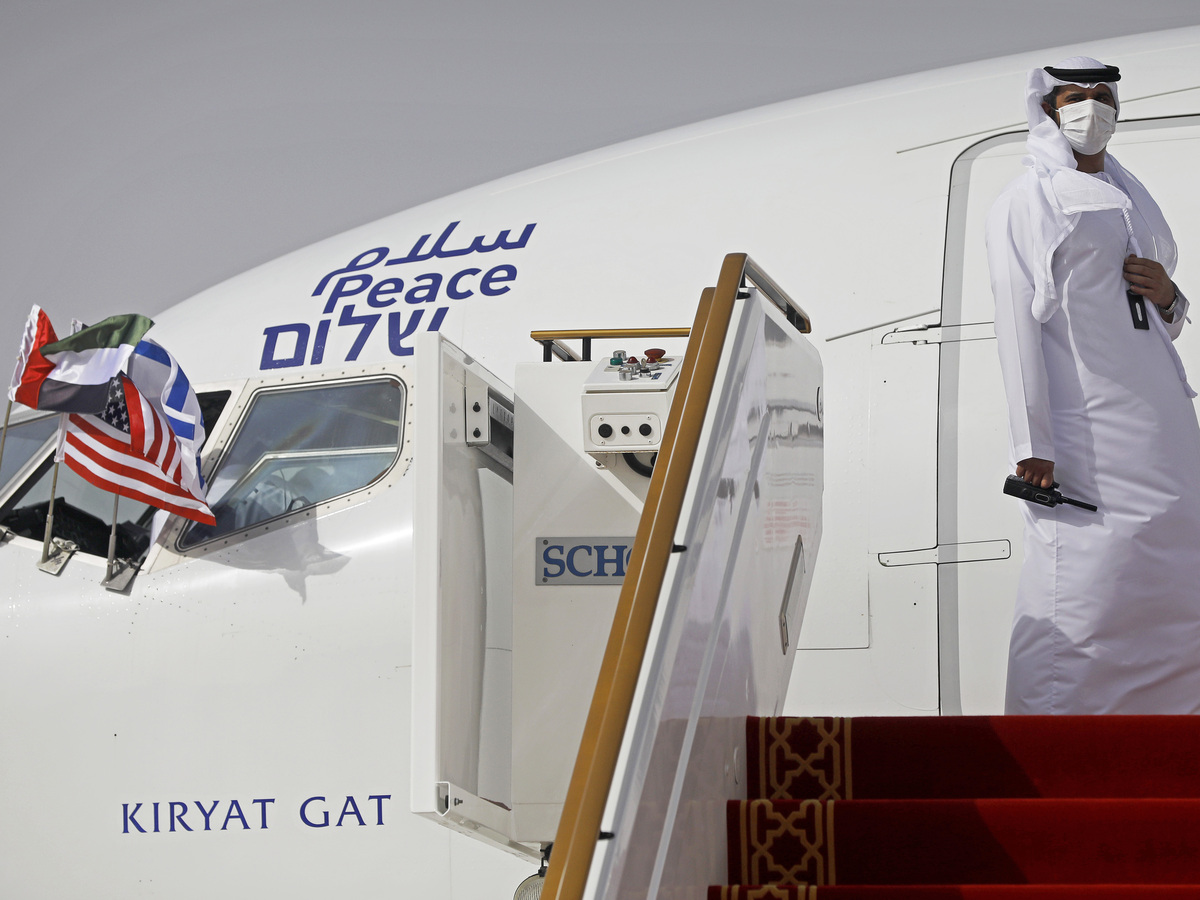 An official stands at the door of an Israeli El Al airliner after it landed in Abu Dhabi, United Arab Emirates, on Monday after flying in from Tel Aviv.

The official treaty between their countries has not yet been signed, but — amid some opposition in the region — Israelis and Emiratis are engulfed in charm offensives, media buzz, dreams of business and travel.

Jared Kushner, President Trump’s son-in-law and senior adviser, joined U.S. and Israeli officials Monday on the first official Israeli flight from Tel Aviv to Abu Dhabi to advance the Aug. 13 deal to establish diplomatic ties between Israel and the United Arab Emirates. The U.S. government-chartered El Al plane had the word “peace” written outside the cockpit in Hebrew, Arabic and English, along with U.S., Israeli and Emirati flags. The plane headrests bore the message “Making History.”

After the deal was announced earlier this month, Tel Aviv’s city hall was lit up in the red, green, white and black of the Emirati flag, and Israeli news channels quickly dispatched reporters to the United Arab Emirates for the first time. 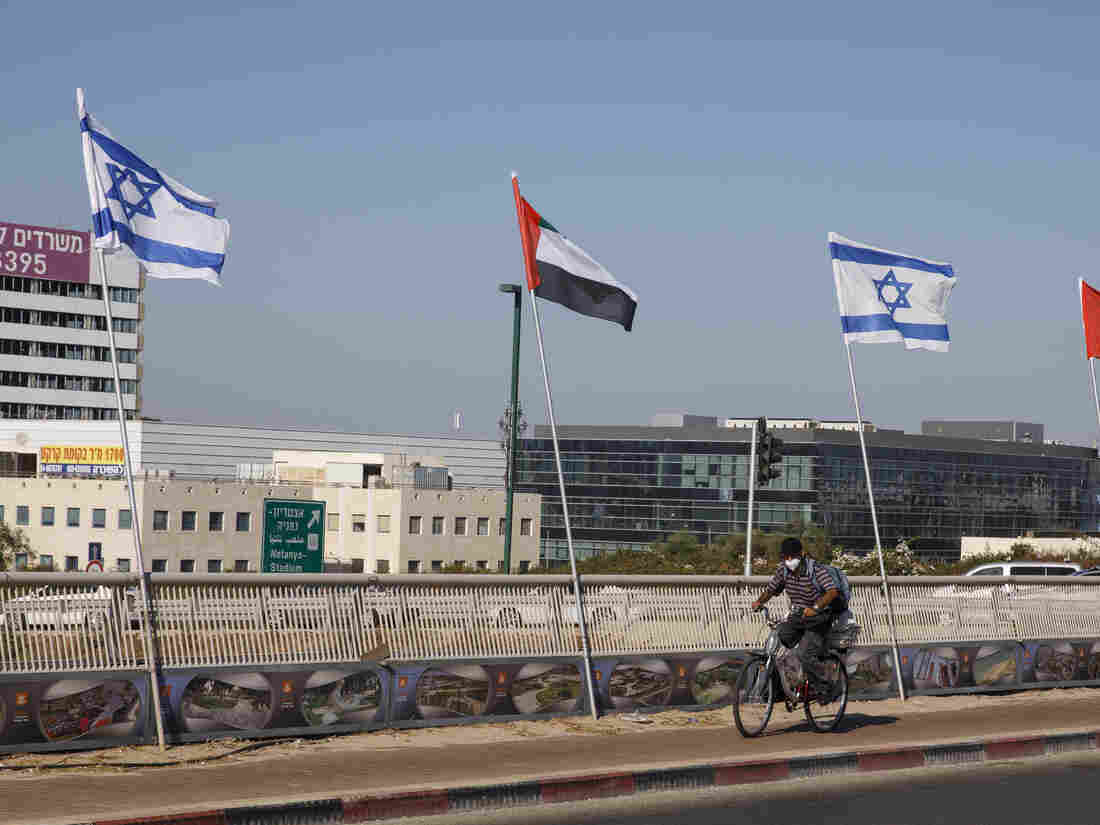 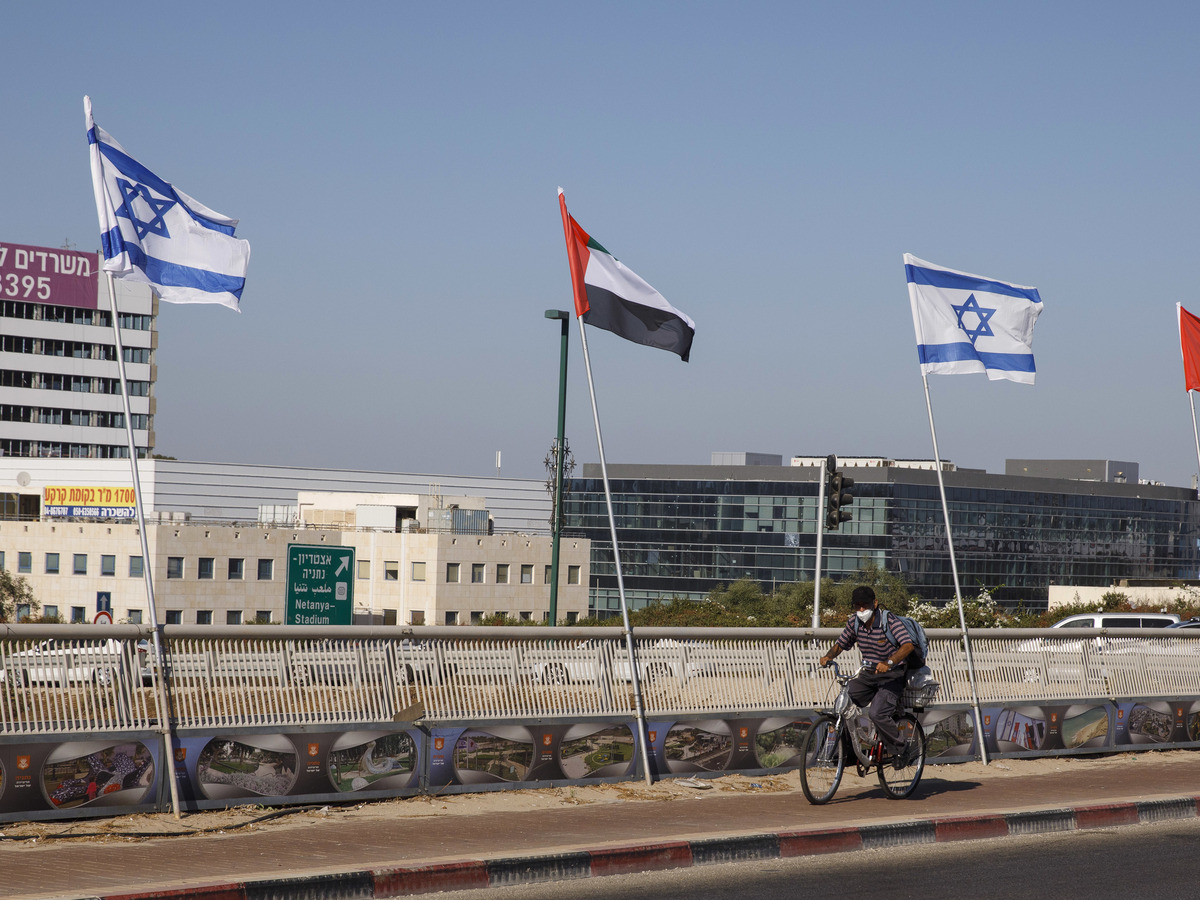 A cyclist rides by Israeli and United Arab Emirates national flags in Netanya, Israel, on Aug. 17.

The deal is being touted as a win-win-win for Israeli Prime Minister Benjamin Netanyahu, Emirati Crown Prince Sheikh Mohammed bin Zayed Al Nahyan and President Trump, who present it as a boon for business and geopolitical stability. For Israelis barred from most of the Middle East, the luxuries of Dubai and the prospect of greater acceptance in the region and access to the Emirati economy suddenly appear within reach. For Emiratis, the deal offers the possibility of U.S. weapons and access to Israeli technology know-how.

“It’s new times,” said mattress company owner Avi Barssessat, one of several Israeli businesspeople who are coming forward now about their years of secret trade with the Emirates. He sells his signature bigger-than-king-sized beds in Dubai — “you know, they live luxury life,” he said — via Slovakia to hide their Israeli origins. Now he expects direct and booming trade with the Emirates. “I’m dying to go there,” he said.

“A lot of my friends and families, they said enough is enough,” Mahmood Alawadi, an Emirati journalist for the Arabic news site Elaph, told NPR. His father suffers from Parkinson’s disease and hopes Israel’s medical expertise may help him. “We want economy. We want stability in the region. Enough hatred.”

Left out of the new relationship are the Palestinians, who lost major leverage: a prominent Arab country has now cracked the unified stance by nearly all Arab countries to withhold official relations with Israel until it resolves its conflict with the Palestinians.

The Palestinian Authority recalled its ambassador to the UAE in protest, and many Palestinians have accused the Emirates of betrayal.

“They are letting us down,” said Palestinian pediatric oncologist Lama al-Akhras, outside a West Bank hospital emergency room bearing the name of Sheikh Zayed bin Sultan Al Nahyan, the late Emirati leader who founded it.

On the flight to Abu Dhabi, NPR asked Kushner how Palestinians might fit into the Israel-UAE relationship. Kushner responded, “We can’t want peace for them more than they want it for themselves. We have a good offer on the table and when they’re ready, they’ll call us. We are not going to pressure them, we are not going to pay them. We are focused on what we can do to make the lives of the Palestinian people better.”

Israel and the UAE have never faced off on a battlefield. Instead, they have long shared quiet trade, security ties and a common enemy in Iran. The UAE has hosted Israeli athletes for competitions in recent years, too.

The Emirates said it will establish official ties with Israel in exchange for Israel shelving its West Bank annexation plans, though Israeli annexation had already been derailed by international and internal Israeli opposition. The Emirates now seeks F-35 fighter jets from the U.S., and finds President Trump — who boasts of a historic foreign policy win in the diplomatic deal as he seeks reelection — sympathetic.

The Emiratis are “buying a little bit of political risk insurance in the post-Trump era,” says David Makovsky of the Washington Institute for Near East Policy. “If Trump does not win a second term … what if the Democrats go back to reviving the Iranian nuclear deal? Will they somehow, as Gulf Arab states, feel marginalized, as American focus is elsewhere?”

Makovksy, whose podcast explores the Israeli leaders who made peace with Egypt and Jordan, said the Israel-UAE deal is an important achievement but bears little political risk for Netanyahu. The Israeli leader bills it as “peace for peace,” boasting of forging ties with an Arab country without needing to surrender captured territory.

The enthusiasm is not universal among Israelis.

“When Netanyahu says it’s peace for peace … it’s just a slogan, unless it goes deeper … not just what’s going on with who can buy weapons from whom,” says Israeli yoga teacher Yoav Shamash, reflecting the skepticism Israelis have toward a peace deal based on geopolitical interests.

“This is like making peace with the moon. Who cares? Are we at war with Dubai? Do we have a shared border? No! It’s like two kids fighting in kindergarten and telling the kid, make up with a kid at a different kindergarten,” Eyal Berkovic, co-host of the popular Israeli TV talk show Ofira & Berkovic, said on a recent show.

It is harder to gauge the range of public opinion about the deal in the Emirates.

A Washington Institute poll conducted earlier this summer found 80% of Emiratis surveyed were opposed business and sports contacts with Israel. But when the deal was announced this month, if Emiratis opposed it, they hardly expressed their opposition on social media. Those who commented on the deal mostly offered support — even as anti-deal Twitter hashtags were trending in neighboring Gulf countries.

In a 2019 report, Human Rights Watch said the UAE “showed no tolerance for any manner of peaceful dissent.”

An Emirati social scientist, who asked that NPR not use her name because she feared retribution from her government for speaking against the deal, told NPR that she and several other Emiratis made their Twitter accounts private when the deal was announced, out of concern that government agents would monitor their response to the normalization.

“This should have been a pan-Gulf decision, not one country’s doing. It should have prioritized Palestinians. It was premature, especially when Netanyahu is the premier. It was the worst time,” she says.

But Mina Al-Oraibi, the Iraqi-British editor-in-chief of The National, an Abu Dhabi-based newspaper, says Emiratis have high trust in their leadership and are evolving to accept ties with Israel.

“While the establishment of ties is incredibly big news, it still is something that I think has been worked towards,” Al-Oraibi says. “It has been gradual for people culturally … to be more accepting of it.”