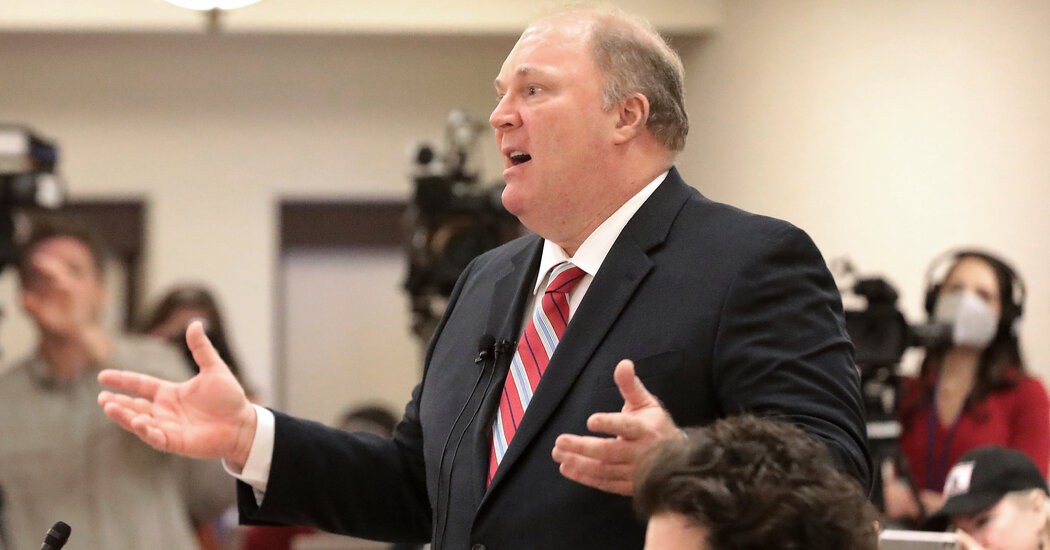 A Republican report on the 2020 election in Wisconsin endorsed a host of debunked claims of fraud and false assertions about lawmakers’ power to decertify President Biden’s victory, lending credence to the conspiracy theories that have gripped Republicans in the state for more than 16 months.

The claims in the report, commissioned by the Republican speaker of the Wisconsin Assembly and written by a conservative former Wisconsin Supreme Court justice, immediately reopened a rift among Republicans in one of the nation’s most narrowly divided battleground states. While some in the party are trying to move on to the next election, the report is likely to fuel those still fixated on overturning the last one.

The document is the latest, but not the final, word on Wisconsin’s ongoing Republican-authorized investigation into false claims of fraud and irregularities in the 2020 election. Robin Vos, the Wisconsin Assembly speaker, commissioned the investigation and appointed Michael J. Gableman, the former justice, to lead it in June, days after former President Donald J. Trump issued statements criticizing him and other leading Wisconsin Republicans for “working hard to cover up election corruption.”

Mr. Gableman presented his findings to the Wisconsin Assembly’s elections committee during a hearing Tuesday. He directly contradicted a legal analysis conducted by the Legislature’s lawyers in November that found there is no basis in law for decertifying an election.

The Constitution, the analysis concluded, provides no role for states “after presidential election results have been certified.”

Still, Mr. Gableman said Tuesday, “the Legislature ought to take a very hard look at the option of decertification of the 2020 Wisconsin presidential election.”

But even if the election is decertified, Mr. Gableman acknowledged in his report it would have no practical impact.

“This action would not, on its own, have any other legal consequence under state or federal law,” he wrote, in the closing lines of the 136-page report. “It would not, for example, change who the current president is.”

The effort to overturn the election has spawned calls for Mr. Vos to resign and propelled a conspiracy-theory-minded candidate for governor, Timothy Ramthun, a state representative. Some Republicans had hoped Mr. Gableman’s report would put questions about the election to rest. Mr. Gableman made clear that’s unlikely. “This is just the beginning of the investigation,” he said Tuesday.

“I can guarantee that I will not be part of any effort, and will do everything possible to stop any effort, to put politicians in charge of deciding who wins or loses elections,” Mr. Steineke, who is not seeking re-election this year, wrote on Twitter. “Handing authority to partisan politicians to determine if election fraud exists would be the end of our republic as we know it.”

Mr. Vos and his spokeswoman did not respond to questions Tuesday. Mr. Trump, in a statement as the hearing began, said “everyone who loves America” should watch Tuesday’s hearing and called Mr. Gableman “highly respected.”

The report Mr. Gableman delivered included a series of recommendations for Wisconsin’s legislators, who last week adjourned for the year. He said they should provide a method for private citizens to challenge the state’s voter rolls; give the power to certify elections to a “politically accountable body” rather than the governor and the elections commission, whose members are appointed by the Legislature and the governor; create a way for presidential candidates to “assemble alternative slates of electors”; and allow post-certification challenges to election results.

The report also said Wisconsin law should be changed to make it more difficult to certify presidential elections.

“In the event of widespread contest, the thumb should be on the scale in favor of withholding certification of electors,” Mr. Gableman wrote.

“This circus has long surpassed being a mere embarrassment for our state,” Mr. Evers said Tuesday. “Every day this effort continues it is an increasingly dangerous and ongoing threat to our democracy.”

In his testimony he also called for eliminating the state’s bipartisan elections commission; said that Mark Zuckerberg, the Facebook founder who funded a nonprofit that issued grants to local election offices, “bought the 2020 election for Biden”; and complained about negative media coverage. The testimony included 25 minutes of eight videotaped interviews between lawyers from the Thomas More Society, which has sought to overturn the 2020 election, and voters who live in nursing homes, which were presented as evidence that nursing home residents “had been taken advantage of” when employees assisted them in voting in 2020.

Numerous inquiries. Since former President Donald Trump left office, there have been many investigations and inquiries into his businesses and personal affairs. Here’s a list of those ongoing:

Mr. Gableman is a longtime figure in Wisconsin’s conservative politics. After serving as a district attorney in the state’s rural north and as a local judge, he won a seat in 2008 on the Wisconsin Supreme Court in a campaign in which he aired an ad critics slammed as racist.

He worked for the Office of Personnel Management during the Trump administration and, after Mr. Biden’s victory, said in November 2020 at a rally in Milwaukee that the election had been stolen from Mr. Trump. In a June 2021 interview with The New York Times following his appointment, Mr. Gableman said he wasn’t sure who won the state.

“My hope is that this investigatory process will significantly reduce cause for such similar doubts in the future,” he said then.

Mr. Gableman spent the next eight months embroiled in an array of legal fights related to his investigation. He said Tuesday that his investigation had spawned nine separate lawsuits that remain outstanding in Wisconsin courts.