Wisconsin Hunters Kill Over 200 Wolves in Less Than 3 Days 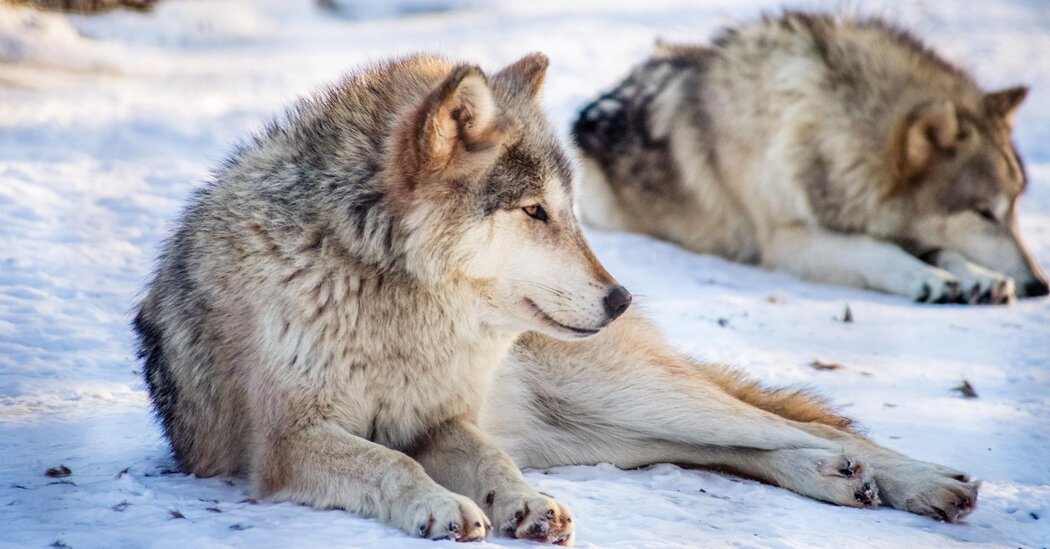 Hunters in Wisconsin killed more than 200 wolves last week, far exceeding the state’s limit as they scrambled to take advantage of Trump-era wildlife rules that they worry may be tightened by the Biden administration.

At least 216 wolves were killed in less than 60 hours, exceeding the state quota of 119 and prompting Wisconsin to end what was meant to be a one-week hunt four days early, according to the Wisconsin Department of Natural Resources.

Environmentalists, who fought unsuccessfully in state court to stop the hunt, said the killings had occurred during breeding season, when gray wolves are especially vulnerable. They said the large number of wolves killed in such a short time underscored the need for President Biden to put the gray wolf back on the list of animals protected under the Endangered Species Act.

“These animals were killed using packs of dogs, snares and leg-hold traps,” Kitty Block, chief executive of the Humane Society of the United States, said on Tuesday. “It was a race to kill these animals in the most cruel ways.”

The hunt, reported by The Milwaukee Journal Sentinel, follows the gray wolf’s January removal from the Endangered Species Act. In October, the Trump administration announced that the species, which had been all but exterminated in the lower 48 states by the mid-20th century, had rebounded enough that it no longer needed federal shielding.

The removal of the wolf from the list was one of many rollbacks of environmental regulations under the Trump administration, which last summer announced new rules that would make it easier to remove a species from the endangered list and weaken protections for threatened species.

The resurgence of wolves in certain parts of the country has been called a success story for conservationists. But as their numbers grew, ranchers have had to contend with wolves’ appetite for cattle and sheep. Conservationists counter that wolves keep deer, elk and other species in check and therefore help prevent more vegetation loss.

The last time wolves were hunted in Wisconsin was 2014, after President Barack Obama said the wolf could be removed from federal protection.

A federal judge later rejected the Obama administration’s efforts to keep the wolf off the list.

Wisconsin is the only state in the country that requires a yearly wolf-hunting season if the animal is not protected under the Endangered Species Act, according to Nicholas Arrivo, a lawyer for the Humane Society.

The Trump administration’s decision meant the state would have to hold one hunting season a year, which under Wisconsin law starts in early November and ends on Feb. 28.

Wisconsin wildlife officials had scheduled the start of the hunting season for this November, citing the need for time to develop a “science-based” harvest quota and work closely with the public and Native American tribes to create a plan.

But Hunter Nation, a hunters group led by Luke Hilgemann of Wisconsin, accused state officials of “intentionally delaying the wolf harvest to give radical anti-hunting groups time to block the delisting and stop a hunt altogether.”

The group filed a lawsuit on Feb. 2 in which it argued that under state law, the hunt should be scheduled immediately since the wolf was taken off the list on Jan. 4.

The lawsuit noted a letter from Republican state lawmakers dated Jan. 15 in which they called for a wolf hunt season that month.

In their lawsuit, hunters pointed to President Biden’s executive order to tackle climate change, which included a review of all existing regulations and policies enacted by federal agencies under the Trump administration.

“There is a substantial possibility that Wisconsinites’ time to hunt wolves is limited,” according to the lawsuit.

On Feb. 12, a Jefferson County circuit court judge ruled in favor of the hunters, ordering the state to start the season that month.

Before the hunt, state officials estimated there were about 1,200 gray wolves in the state.

Mr. Arrivo said it was possible that many of the wolves killed last week were pregnant or might have been mothers with new pups that were still dependent on them and might now die of starvation.

“I think the actual death toll is considerably higher because of the rippling effects through the wolf family structure,” Mr. Arrivo said.

Hunter Nation said the large number of wolves hunted in such a short period of time showed that the population had “significantly increased.”

The group said that in 2014, it took two months for hunters to kill about 100 wolves.

“This season it took just three days!” the organization said in a statement, describing the hunt as a success. “Clearly, the population of gray wolves has significantly increased during that time and the D.N.R. must take a serious look at their population models and counting methods.”

Richard M. Esenberg, a lawyer for Hunter Nation, said it was misleading for animal rights activists to claim that hunters had killed double the number of wolves allowed by the state.

The state had set a quota of 200 wolves, with 119 for hunters who applied for permits with the department and 81 set aside to the Ojibwe Tribes under their treaty rights.

“The notion that there was this wide divergence between the outcome of the hunt and the number of the wolves that could be hunted simply doesn’t bear up to analysis,” Mr. Esenberg said.

But the tribes consider wolves to be sacred and made a deliberate decision not to hunt them, said Dylan Jennings, a spokesman for the Great Lakes Indian Fish and Wildlife Commission, which represents the tribes.

The tribes saw their allocation as a way to conserve a large number of the wolves — not to give hunters more animals to kill, he said.

The losses are “appalling,” Mr. Jennings said. “There are a lot of people upset about it.”