Wildfires are an annual California nightmare now. Will they only get worse? – San Francisco Chronicle

Nearly three years after a swarm of Wine Country wildfires devastated California, another explosion of flames is making clear that the state’s efforts to fight the crisis may be no match for the worsening conditions fueling it.

Flames leveled entire Santa Rosa neighborhoods in 2017, then destroyed almost all of the Butte County town of Paradise 13 months later. Each of those fires set records for destruction.

In the past week, the extent and complexity of the blazes have stretched California’s firefighting resources to the limit. Over a few days, fires ignited by lightning in an intense heat wave torched an area more than twice the size of Los Angeles, forcing 119,000 people to flee in the middle of a pandemic.

And it’s only August. The most dangerous fire-prone months are still to come.

“The hots are getting hotter, the dries are getting drier — climate change is real,” Gov. Gavin Newsom said, recording a cell phone video Thursday from a forest outside Watsonville, as flames encroached nearby.

“If you are in denial about climate change, come to California,” Newsom added in the video, which played for the Democratic National Convention. 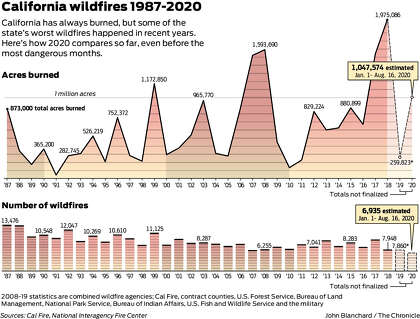 Climatologists share that perspective, blaming the repeatedly catastrophic blazes largely on higher temperatures that dry out vegetation more than ever before, priming it to ignite intensely, particularly when long, dry summers bleed into arid autumns.

More than 771,000 acres burned in less than a week — making the current fire siege already more than three times as large as the Wine Country disaster of 2017, when fires burned the North Bay for about a month.

Now, after an extremely dry winter in Northern California, conditions are more dire. An ominous forecast from Sunday into Tuesday that could bring another round of dry lightning presents another looming challenge.

These raging wildfires come with a severe human cost: Homes burn down, and thousands of people are dislocated. The aftereffects could be worse this year, complicated by the COVID-19 pandemic and sputtering economy.

By Friday, it was apparent that even though California has spent several years battling the same conditions, the current resources aren’t enough.

Firefighters said their supply of ground crews, engines and aircraft was stretched thin over the past week. Some 96% of Cal Fire engines were in use — a likely record. County and city fire departments have stepped in to staff firehouses while nearly all Cal Fire crews battle wildfires.

“All of our first responders are working to the ragged edge of everything they have,” state Assemblyman Jim Wood, a Santa Rosa Democrat, said during a briefing Friday in Calistoga. 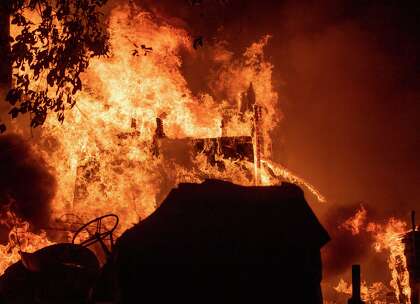 Newsom called for aid from across the country, even as other Western states contend with their own wildfires.

While California set aside $372.7 million in this year’s budget for an emergency wildland fire suppression fund, it’s not clear how much of that money it has spent. If it blows through that, it could dip into a $2.6 billion special fund for economic uncertainties.

But more state funds won’t counter the trend of increased development in woodland areas, which some argue has made the situation more difficult to manage.

Rural residents increasingly contend with fire as a way of life, altering their homes to be more fire-resistant.

Still, even the most conscientious have found themselves humbled by nature — sometimes repeatedly. Tom Vreeland was a member of neighborhood fire councils for years before his home on Atlas Peak Road in Napa burned to its foundation in 2017. Radiant heat melted his wife’s Tesla into the pavement. The couple hadn’t finished decorating their new house when unusual summer lightning sparked a new cluster of fires Monday, prompting another evacuation warning.

Vreeland’s wife and son departed to a local RV park, but Vreeland remained home Thursday, driving up the road every few hours to check the fire’s progress.

“It’s hard,” he said, reflecting on all the neighbors who sold their properties after the Wine Country fires.

“Some are saying, ‘I’m just too old to do this — I just don’t have the energy it takes to rebuild,’” Vreeland recounted.

PG&E is trying to upgrade its equipment, improve maintenance and trim more vegetation, and the company is not to blame for the current fire siege. The company also resorted to shutting off power lines in recent years to reduce the chance that its equipment would spark fires and will probably do so again in the months ahead.

More aggressive forest management may help California get a better grip on its ruthless wildfires. The state is “way behind” on thinning out the dead vegetation that fuels large fires, said Ed Smith, a senior forest ecologist with the Nature Conservancy. He blamed the backlog on the high cost and complexity of catching up, coupled with a 150-year history of trying to suppress all fires.

Smith said part of the solution is prescribed burns and even letting some lightning-caused fires to spread a bit — if conditions are less dangerous and lives and property are not threatened, unlike now.

“We need to get better at doing larger management interventions, like introducing fire, and doing that as opportunistically as possible,” Smith said.

In the Sonoma Valley, winemaker Sam Coturri waits to see how much the current fires damage his business. It’s a familiar drill: Three years ago, the Nuns Fire came within feet of his parents’ home. Several of his friends or their families lost houses in the fire.

Though a smaller fire came within a quarter mile of his home in 1996, the threat has evolved in Wine Country, where major wildfires have ignited for several consecutive years.

But Coturri, 37, isn’t leaving. He feels linked to Sonoma County, his lifelong home and one of the world’s premier wine grape-growing regions.

“This is what we know, and this is what we do, what my family does,” Coturri said. “And when you talk about climate change on a larger scale, there’s nowhere else you can go that’s not going to have some sort of impact.”

For now, he thinks, all he can do is adapt — and prepare for what’s to come.