Why Republicans Won’t Budge on Guns 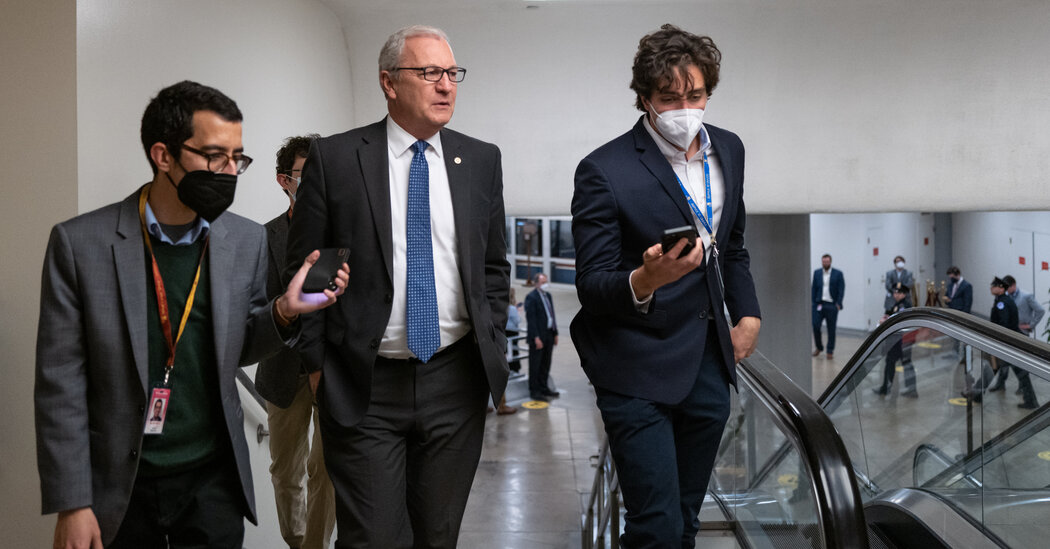 WASHINGTON — The calculation behind Republicans’ steadfast opposition to any new gun regulations — even in the face of the kind of unthinkable massacre that occurred Tuesday at an elementary school in Texas — is a fairly simple one for Senator Kevin Cramer of North Dakota.

Asked Wednesday what the reaction would be from voters back home if he were to support any significant form of gun control, the first-term Republican had a straightforward answer: “Most would probably throw me out of office,” he said.

His response helps explain why Republicans have resisted proposals such as the one for universal background checks for gun buyers, despite remarkably broad support from the public for such plans — support that can reach up to 90 percent nationwide in some cases.

The reality is that that 90 percent figure probably includes some Republicans who are open to new laws, but would not clamor for them or punish a lawmaker for failing to back them, and the 10 percent opposed reflect the sentiments of the G.O.P. base, which decides primary contests and is zealous in its devotion to gun rights.

Most Republicans in the Senate represent deeply conservative states where gun ownership is treated as a sacred privilege enshrined in the Constitution, a privilege not to be infringed upon no matter how much blood is spilled in classrooms and school hallways around the country.

“We don’t want to take away the rights of law-abiding citizens,” said Senator John Barrasso of Wyoming, the No. 3 Republican, explaining why members of his party have no interest in imposing new regulations on gun purchases, even after the murder of 19 children and two teachers, the latest in a seemingly unending series of shooting massacres in the United States.

The politics of gun control have always been fraught, and Democrats dodged the issue for decades following their loss of the House in 1994, which many of them attributed to their passage of an assault weapons ban. The epidemic of mass shootings has prompted Democrats to change course, and now even Democrats from red states, such as Jon Tester of Montana, have embraced background checks.

But as Republican voters have become more conservative, Republican lawmakers have dug in deeply against any notion that new strictures on gun purchases are an antidote to mass shootings. They say that such restrictions are unconstitutional, even though adult Americans would continue to have easy access to weapons purchases if they became law.

Republicans like Mr. Cramer understand that they would receive little political reward for joining the push for laws to limit access to guns, including assault-style weapons. But they know for certain that they would be pounded — and most likely left facing a primary opponent who could cost them their job — for voting for gun safety laws or even voicing support for them.

The political threat from any perceived support for gun restrictions was on display just this week in a hotly contested Senate Republican primary race in Alabama.

Mike Durant, an Army helicopter pilot once considered a contender for the Senate nomination, was reproached by his opponents for an 11-year-old speech in which he seemed to suggest that disarming an urban population would be a step toward reducing crime.

Mr. Durant said his remarks, made at the Army War College, were related to the civil war in Somalia, where he had piloted a helicopter in the famous Black Hawk Down incident, and were being twisted and taken out of context. But the damage was done, and the attack was considered a factor in his finishing third on Tuesday, in a contest whose victor was all but certain to be elected. Such outcomes are not lost on other Republicans.

The scene on Wednesday on Capitol Hill had a wrenching familiarity to it, as Republican lawmakers were mobbed by reporters and pressed on whether they could support something — anything — to curb the ongoing gun violence in the United States. Most who engaged said they were open to discussions, that they were happy to review what was on the table and that maybe, just maybe, some accommodation could be reached.

Democrats said they have seen it all before and know how it ends — with nothing.

“They are going to rope-a-dope the issue, hope that Congress adjourns, and 10 days from now the furor will once again die down,” said Senator Edward J. Markey, Democrat of Massachusetts.

Other Democrats said they saw nothing from their Republican colleagues that suggested a change in sentiment — particularly with crucial midterms looming — or that would lead them to expect that progress could be made on gun safety, despite Tuesday’s horrendous toll.

“They are disturbed, they are troubled, but they are not willing to change where they are,” said Senator Chris Coons, Democrat of Delaware.

While they are mainly opposed to gun safety legislation, Republicans do not want to appear to be nonresponsive in the wake of the shooting. Many voiced support for new mental health programs or for “hardening” the nation’s schools as an alternative to taking action on guns.

Senator Ron Johnson, Republican of Wisconsin, on Wednesday sought to win unanimous Senate agreement to bring up a bill he has written that creates a sort of clearinghouse on best practices for school safety.

“There’s nothing partisan about this bill whatsoever,” said Mr. Johnson, a strong proponent of gun rights. “It’s just a good idea that could save lives.”

But to Democrats, Mr. Johnson’s idea was far from an appropriate legislative response to what took place this week in Uvalde, or earlier this month in Buffalo, or in 2012 in Newtown, Conn.

“The Johnson bill is not in any way, shape or form a sufficient solution,” said Senator Chuck Schumer, Democrat of New York and the majority leader.

Though the National Rifle Association has recently been diminished by scandal and financial turmoil, Democrats say that the organization still has a strong hold on Republicans through its financial contributions and support, hardening the party’s resistance to any new gun laws.

Despite the shooting in the same state, top Republicans are expected to appear this weekend at the group’s convention in Houston.

“It is hard to say no to someone, to groups, who are principal suppliers of campaign funding, and that’s where they are trapped,” Mr. Markey said of Republicans.

But Mr. Cramer noted that he did not receive the N.R.A. endorsement when he won election in 2019, and argued that most Republicans are representing not the gun-rights group, but the views of constituents who will not tolerate any action that could be seen as clamping down on gun rights.

“It is a fundamental right for law-abiding citizens to protect themselves with firearms,” said the senator, who has an “A” grade from the N.R.A. “It is fundamental. It is exactly that. It is constitutional.”