Why Republicans Campaign on Guns While Democrats Choose Not To 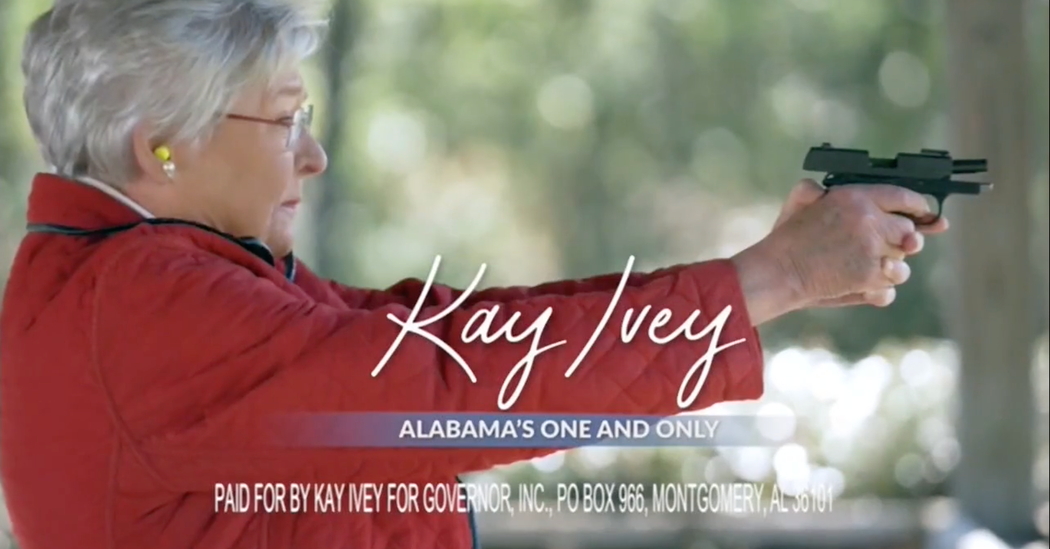 In Alabama, Gov. Kay Ivey unpacked lipstick, an iPhone and something else from her purse in one campaign advertisement — “a little Smith & Wesson .38,” she said. A Republican candidate for governor in Georgia declared in a different spot, “I believe in Jesus, guns and babies.”

In Nevada, an ad for former Senator Dean Heller, now a Republican candidate for governor, bragged about his wife’s shooting skills. And in North Carolina, a spot for Representative Ted Budd, a Republican Senate candidate, boasted that he owned a gun range.

As the nation reels from a massacre at a Texas elementary school in which a gunman killed 19 children and two teachers, a review of Republican and Democratic advertising during the first months of 2022 highlights the giant cultural chasm over guns in America. As both parties have navigated their respective primary seasons, Republicans have been far more likely to use messaging about guns to galvanize their base in the midterms than Democrats — who are largely in agreement on the issue of combating gun violence, but have seen one legislative effort after another collapse.

Since January, fewer than two dozen television ads from Democratic candidates and their aligned groups mention guns or combating gun violence, according to a review of data through Tuesday from the media tracking firm AdImpact.

But more than 100 television ads from Republican candidates and supportive groups have used guns as talking points or visual motifs this year. Guns are shown being fired or brandished, or are discussed but not displayed as candidates praise the Second Amendment, vow to block gun-control legislation or simply identify themselves as “pro-gun.”

The disparity highlights how much Republicans stand to gain — and how little Democrats can benefit — from campaigning on guns in primaries.

Republican primary candidates are often competing to show how conservative they are in a polarized landscape ever more defined by white-hot cultural battles. And guns are an easy visual shorthand.

“You basically have Republican primary candidates trying to explain to Republican primary voters that they are going to be on their side when it comes to the cultural cold civil war that’s being fought right now,” said Robert Blizzard, a Republican strategist.

Democratic primary candidates generally support gun control, so they find other ways to draw contrasts. But the issue is also tricky for Democrats to navigate politically. Democratic voters — and many other Americans, polls show — support more far-reaching action. But broaching gun control in campaigns risks reminding voters that, despite controlling Congress by narrow margins, Democrats have failed to deliver meaningful action and continue to face long odds.

Within hours after the Texas shooting, shaken Democrats in Washington vowed to try again to pursue a compromise with Republicans on gun legislation that could move through the divided Senate. But the challenges were immediately evident, and Democratic outrage and frustration were palpable.

After the Georgia Primary Election

The May 24 races were among the most consequential so far of the 2022 midterm cycle.

Representative Ruben Gallego of Arizona reached for expletives to lash Republicans for inaction. Former Representative Beto O’Rourke interrupted a news conference hosted by Gov. Greg Abbott of Texas, his opponent in this year’s governor’s race, to accuse Republicans of “doing nothing.” And many Democratic lawmakers expressed anger and anguish while acknowledging the path forward was uncertain given Republican opposition.

How or whether the Texas school shooting, the deadliest since Sandy Hook, will change the midterm election landscape remains unclear. Some Democratic candidates, including Stacey Abrams, the party’s nominee for governor in Georgia, are already planning to cast their Republican opponents as extremists on gun rights. The House Democratic campaign arm pledged to “remind voters that we’ll keep fighting to pass common sense solutions — Republicans won’t.” And John Feinblatt, the president of Everytown for Gun Safety — which has spent heavily through its political arm before in general elections — said the organization would “move heaven and earth to defeat candidates who put N.R.A. priorities ahead of public safety.”

But for now, there has been far more activity on the issue on the Republican side. Nearly every major G.O.P. primary this year has seen candidates scramble to portray themselves as the most closely associated with gun culture.

Ads for Josh Mandel, the former Ohio treasurer who lost the Republican primary for Senate, used the tagline “Pro-God, pro-gun, pro-Trump.” In a House primary in Ohio, the Air Force veteran J.R. Majewski ran a television ad in which he carried a rifle, said, “I’m willing to do whatever it takes to return this country back to its former glory” — and then pulled the trigger.

In Pennsylvania, both David McCormick, a former hedge fund executive, and Mehmet Oz, the celebrity physician, sought to win over skeptical primary voters with ads showing them shooting. In one, Mr. McCormick tells viewers that protecting the Second Amendment is “what guarantees the rest of it.” In another, Dr. Oz calls himself “pro-life, pro-Second Amendment, pro-freedom.”

In Arkansas, an ad run by a group supporting Jake Bequette, an Army veteran and former pro football player whose G.O.P. primary challenge to Senator John Boozman failed on Tuesday, repeated the phrase “Babies, borders, bullets” — calling those the “values we cherish” — and showed clips of the candidate taking aim with an assault rifle.

And in Nevada, Mr. Heller declared that the Second Amendment was about both hunting and “knowing that if any criminal comes after one of my daughters —”

“It’ll be the last thing he ever does,” one daughter chimed in.

A much smaller number of Democrats have run primary ads about gun control or gun violence.

In New York, Representative Thomas Suozzi, who is waging a long-shot primary campaign against Gov. Kathy Hochul, is highlighting her support years ago from the National Rifle Association. For her part, a Hochul ad cites her work “cracking down on illegal guns to make our neighborhoods safer.”

Other Democrats have run ads describing gun violence as an issue that touched them personally and propelled them into public service. An ad for Lt. Gov. John Fetterman of Pennsylvania, the state’s Democratic nominee for Senate, said he first entered politics “to stop the violence” after two of his students were shot. And the party’s nominee to replace him, Austin Davis, described forming a group to combat gun violence after a neighbor was shot.

On the campaign trail, though, Mr. Fetterman has faced scrutiny over a 2013 incident in which, as mayor of Braddock, Pa., he brandished a shotgun to stop and detain an unarmed Black jogger, telling police he had heard gunshots. He has declined to apologize or say he did anything wrong.

The wife of Craig Greenberg, the Democratic candidate for mayor of Louisville, Ky., recounted how her husband survived a shooting inside his campaign office in February. And Mayor Cavalier Johnson of Milwaukee described how his car was hit by a stray bullet, by way of promising to crack down on gun violence.

But perhaps no Democrat’s ads have addressed the subject in more raw and personal terms than those supporting Representative Lucy McBath of Georgia in her primary against a fellow Democratic incumbent forced to compete against her for a single redrawn seat.

Ms. McBath’s teenage son, a young Black man, was shot and killed by a white man in 2012. Ads run by her campaign and by supportive outside groups, including the political arm of Everytown for Gun Safety, a group Ms. McBath has worked for, highlighted her efforts to prevent gun violence and her experience with tragedy.

On Tuesday night, as she clinched the nomination for the House seat in Georgia’s Seventh District, Ms. McBath drew on that experience to describe the pain that, she suggested, parents in Uvalde, Texas, were feeling for the first time.

“We paid for unfettered gun access with phone calls to mothers and fathers who have gasped for air when their desperation would not let them breathe,” she said.

“We are exhausted,” she continued, “because we cannot continue to be the only country in the world where we let this happen again and again and again.”