Why Republican Lanhee Chen Thinks He Can Win in California 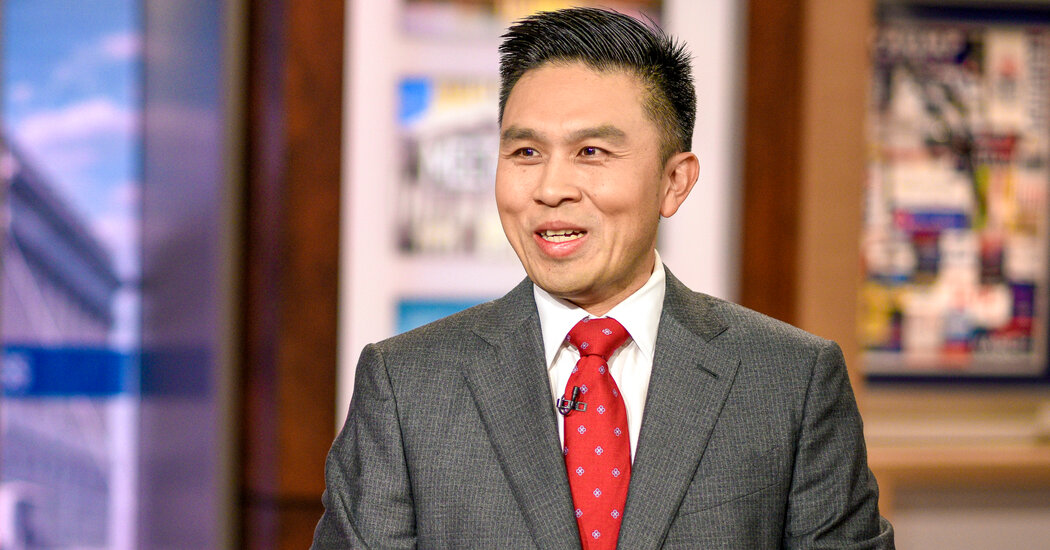 California has not elected a Republican to statewide office since 2006, but Lanhee Chen thinks this might be the year that one of the country’s bluest states shows a hint of red.

The first round of voting in California’s all-parties primary system is in June, and the general election, when Chen and Yee would square off, is in November. The state has not elected a Republican controller since the 1970s.

While this is his first run for public office, Chen, a Stanford University professor, is no stranger to the political fray. He was the policy director for Mitt Romney’s 2012 presidential bid and worked in the administration of President George W. Bush.

In an interview, he discussed why he is running, why he believes he could win and his party’s two most recent presidential standard bearers. Here are edited excerpts from our conversation.

Why run for controller instead of going big and running for governor, or starting local at the school board or City Council?

It’s a tremendously valuable platform for somebody who’s looking to bring change in terms of how the state runs its business — the ability to audit any agency, you really can get in there and fix things. And I’m about diagnosing the problems our state faces. And for me, the problems the state faces are primarily fiscal in nature. So this office to me is a great fit for the things I want to do and how I think we can fix the state, even if it’s not the most glamorous office.

What are the biggest challenges California is facing?

Cost of living is a big one — no one can afford a house. And if they can, they’re saving up for decades to do it. The homelessness problem, which is related to quality of life and the general environment, has gotten worse in even the time I’ve lived out there since coming home in 2013. Public safety concerns are very real, and those have become much more public with the smash-and-grab robberies over the summer.

California Republicans have historically won at moments of disorder. But can you still count on backlash politics in these polarized times, when people tend to stick with their party no matter the issue?

This has been something that’s been building for a long time. If you had asked me the same question two or four years ago, the answer may have been no. I think now the situation has become so urgent. Look at how many recall elections we’re having, whether for governor or for school board and district attorney in San Francisco. The level of reaction to what we’re seeing goes beyond party, it goes beyond ideology — it goes to the experiences people have. I think that anger, that frustration, is palpable. I hear it from Democrats, I hear it from independents and from Republicans. So that leads me to believe, yeah, this can transcend the partisan polarization we’ve seen.

How do you diagnose your party’s problems in California? Why can’t Republicans even compete statewide?

Party leadership in California has generally been focused on winning targeted state legislative and congressional races. You can’t fault them for that rationale, but the problem is then you have no statewide voter contact infrastructure. That’s No. 1.

No. 2: There haven’t been candidates capable of putting together and articulating the kind of message and vision that’s appealing broadly to Californians.

Let’s say you’re campaigning at a farmer’s market in, say, Santa Barbara or Monterey, and a voter approaches you and seems to like you. But they’re apprehensive about voting for the Trump Party. What do you tell them?

I think it’s really important to understand where I’m coming from and why I think it’s important to have somebody who’s got a different partisan alignment from the rest of people in state government. So start with the notion that checks and balances are important. But then I do move to talk about the Republican Party that I know and the kind of Republican Party I believe we can have again, centered around ideas like responsibility and accountability. At some point we’re going to have to move past individual personalities, and I don’t know when that point will be.

So why not just run as an independent?

On the practical side, if you’re not worth several billions of dollars, you’re not going to be able to build that base that’s required. But there’s a more important point. I think authenticity counts for a lot in politics, and I’ve been a Republican my whole life. I’ve never been registered as anything else, and I think it’s important to be yourself.

As liberal as it is, California has millions of dedicated Trump supporters. How do you balance appealing to the political middle without alienating MAGA folks?

What Gov. Glenn Youngkin did successfully in Virginia: You focus on state issues and address the problems that are right before us. If you don’t focus on those, you risk not only not doing the job, but talking about things that aren’t that relevant to the day-to-day lives of people in your state.

Let’s say you get two phone calls: The first is from Mitt Romney, and the second is from Donald Trump. Both want to come to California to campaign for you. What do you tell them?

I would just say that I’m doing my own thing. Now I have to say this: Obviously I have great respect and admiration for Mitt Romney. There are very few things I wouldn’t do for him.

Jonathan Martin is a national political correspondent for The New York Times.

“A hidden redwood forest lies off Redwood Road just a few miles over the ridge from downtown Oakland. The forest’s peaceful groves give little evidence of the park’s bustling past — in the mid-1800s the area was the scene of extensive logging to supply building materials for the San Francisco Bay Area. The logging era has long since passed, and a stately forest of 150-foot coast redwoods has replaced those cut down.”

A new book on the history of PayPal and the entrepreneurs who shaped Silicon Valley.

This week, a waterfall in Yosemite National Park is expected to transform for a few minutes at sunset into a ribbon of bright, fiery orange.

With sufficient rainfall and clear skies, Horsetail Falls — which cascades down the east side of El Capitan — can become a “firefall” for a few weeks each year in late February.

The angle of the light during sunset can make the stream of water “glow and look like it’s on fire,” a park spokeswoman said.