Why Pregnant Women With COVID In India Have Nowhere To Turn : Goats and Soda – NPR 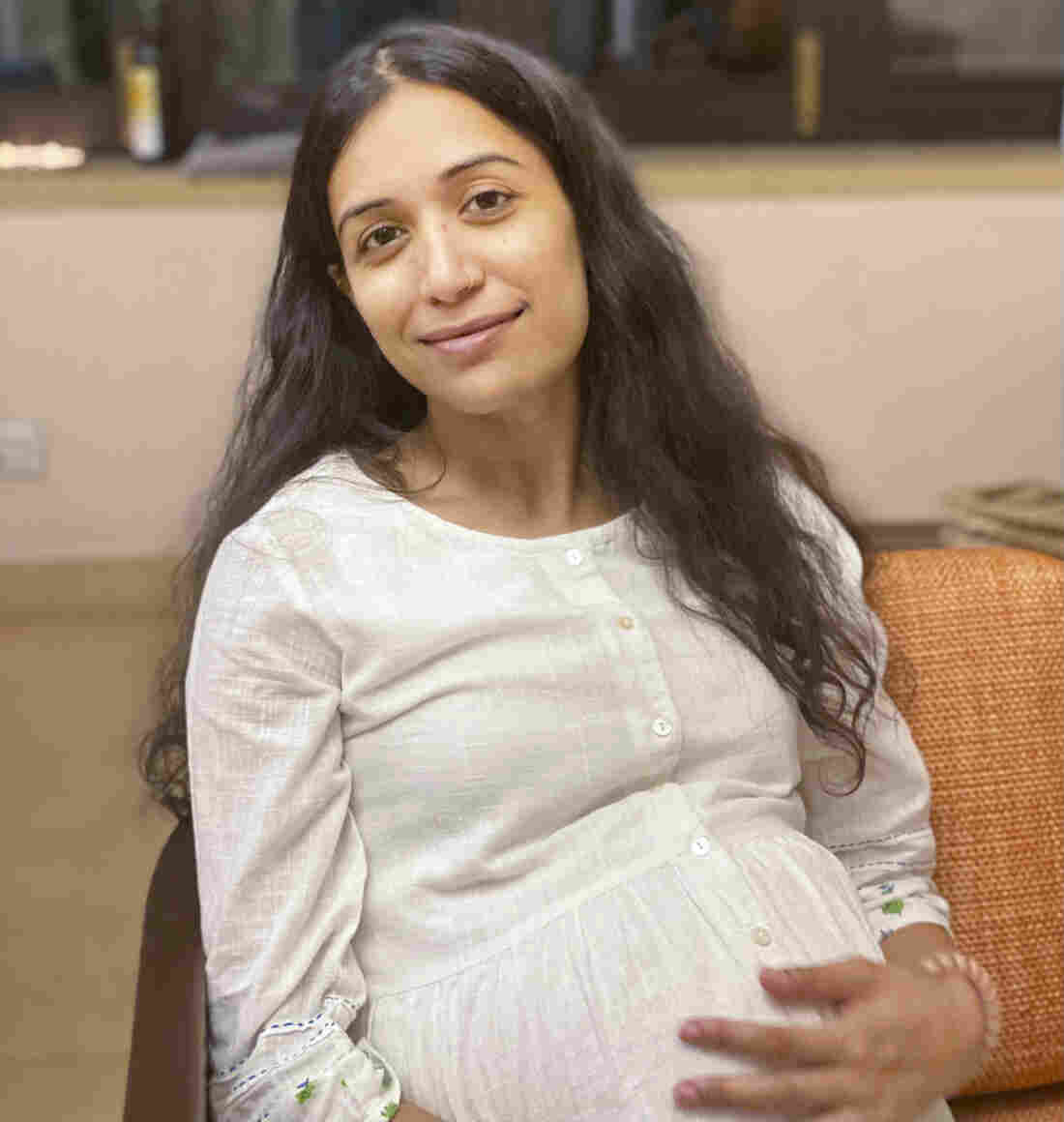 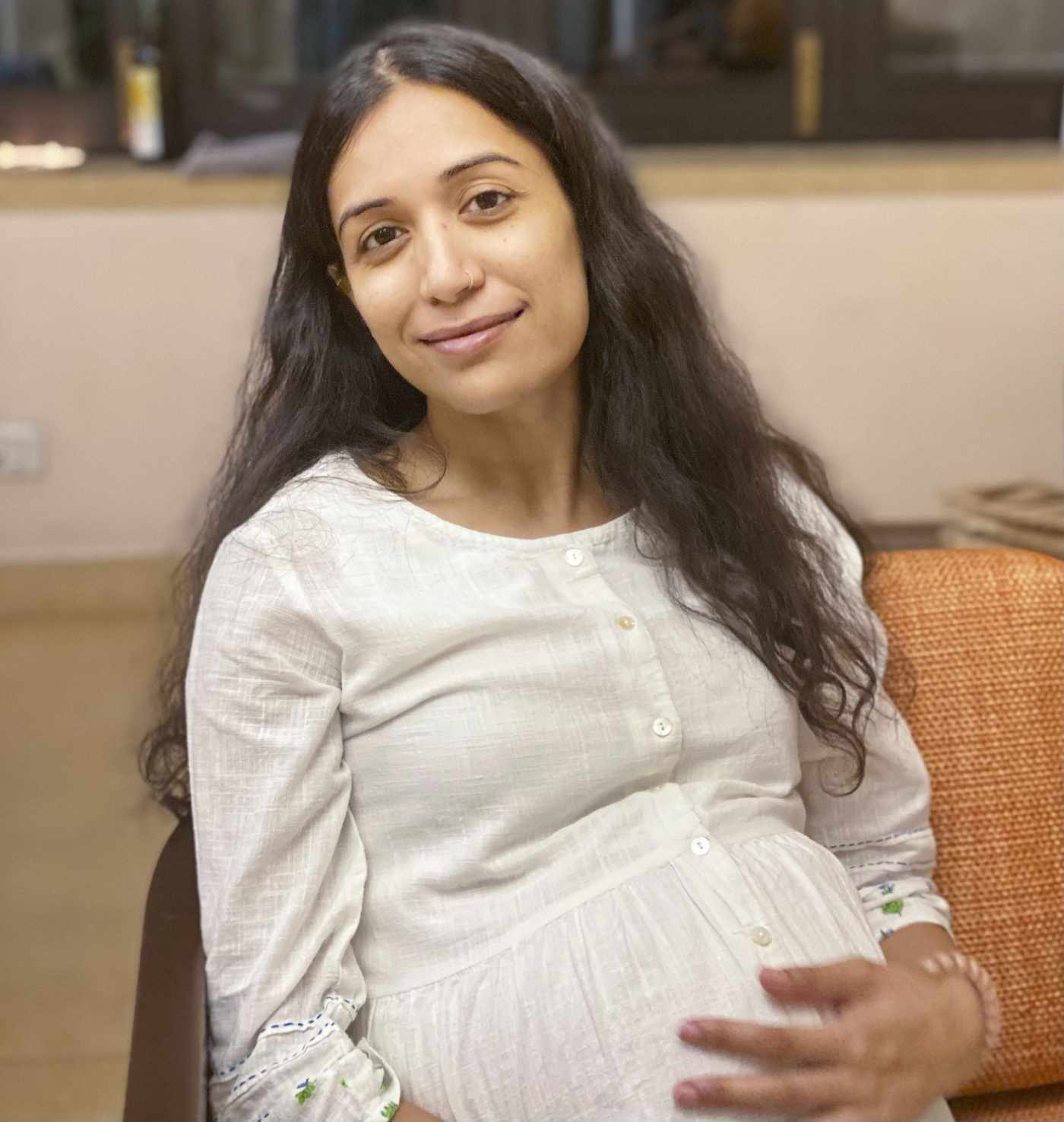 Priyali Sur, 29 weeks pregnant, at home in Delhi on April 30.

When the call came from the doctor that afternoon, it was ominous.

“They said that [my wife, Minal] had suffered a cardiac arrest in the intensive care unit, but the baby’s heartbeat was fine,” says Chetan Waghmere, who works for a corporate company. “An emergency cesarean section had to be done in the ICU itself; there was no time to move her. The baby survived, but Minal did not.”

Minal Waghmere was COVID positive, 32 weeks pregnant and 32 years old when she died on April 8 in the Kingsway Hospital in Nagpur, a city in central India.

“This is a bad disease,” says Chetan with anger in his voice. “Please if you are pregnant, please be careful.”

As I write this from Delhi, I have reached the 32-week mark of my pregnancy. I have spent many moments of the last eight months anxiously wondering how to best care for myself and my unborn child living in a country in crisis. Part of that time I spent battling COVID.

Regular prenatal visits are highly recommended — even more frequently toward the end of pregnancy to keep mom and baby healthy. Earlier this month, daily cases in India were hovering around 400,000, and almost every health facility has been turned into a COVID hospital — including some meant for prenatal care.

My last prenatal appointment a week ago meant waiting in a hospital lobby as COVID patients gasping for breath were wheeled by me. And while I recently had COVID and recovered, so likely had some immunity, these conditions put pregnant women without immunity at greater risk of exposure to COVID. But my doctor says that avoiding in-person consults puts both me and my baby at risk, too — since conditions like preeclampsia can be missed in a tele-health call.

And then there are the pregnant women who have the virus, fighting to live and grow a new life in a country where death seems omnipresent; bodies are piling up at hospitals and crematoriums. As of Tuesday, India’s Health Department confirmed 4,329 deaths from COVID-19 — the country’s deadliest single-day toll since the pandemic began. Scientists say that those tallies are likely vast undercounts.

Data on infection and mortality rates among pregnant women during the country’s second wave aren’t yet available. But experts say the situation for pregnant women with COVID has turned more deadly.

“[From January 2020 to Feb. 2021], we saw one death of a COVID-positive pregnant woman in our hospital,” says Dr. Payal Agarwal, a gynecologist at Kingsway Hospital in Nagpur, and the doctor that treated Waghmere. “[Since March], there has been one death every month of a pregnant woman who was COVID positive.”

“If patients come in late, it’s difficult to save them. Early intervention is key,” says Agarwal.

“More cases of COVID-positive pregnant women are being seen in this second wave that need hospitalization,” says Dr. Sunesh Kumar, head of the department of obstetricians and gynecologists at the All-India Institute of Medical Science (AIIMS).

“We are a COVID-negative hospital. We don’t admit COVID-positive pregnant patients. We ask pregnant women to come with a negative test before admission,” says Raghuram Mallaiah, director of neonatology at one of Delhi’s leading maternity hospitals, Fortis La-Femme.

Recent international studies have linked coronavirus to a higher rate of maternal mortality and increased risk of preterm and stillbirth. Despite this increased vulnerability, vaccination is not an option in India because the Modi administration says it is unclear whether the available vaccines, Covishield (AstraZeneca) and Covaxin are safe during pregnancy. Vaccines like Pfizer and Moderna, which have data showing they are safe for pregnant women, are still not available in India.

“Without guidance and backing from the government, we don’t want to take a risk vaccinating pregnant women,” says Agarwal.

While providers honor the government’s policy to not administer the vaccine to pregnant women, many ignore the instruction to treat pregnant women with COVID.

On Feb. 20, my fever peaked at 102 degrees Fahrenheit. I requested my husband hold a cold compress on my growing belly. I had read somewhere that elevated temperatures can affect the fetus. As I lay there shivering, I worried about our baby.

I had tested positive for COVID the previous day. Away from our home in Delhi, we traveled to a rural area in Southern India for a change in scenery in what had been a long year. The nearest healthcare facility was an hour drive and a general hospital, two hours. My husband called the hospital, which treated COVID patients during the first wave, and explained my condition. The resident on-call told him she needed to check with her supervisor and put him on hold.

“Sorry, we cannot take you,” she replied a few minutes later. “We are not taking COVID patients.” He repeated that I was pregnant. She didn’t budge.

My blood oxygen level never dropped below 95 (within the healthy range, which is 95 to 100) and within a day the fever broke. Many pregnant women have not been so lucky — needing the kind of care you can only get at a hospital — and not able to find it. 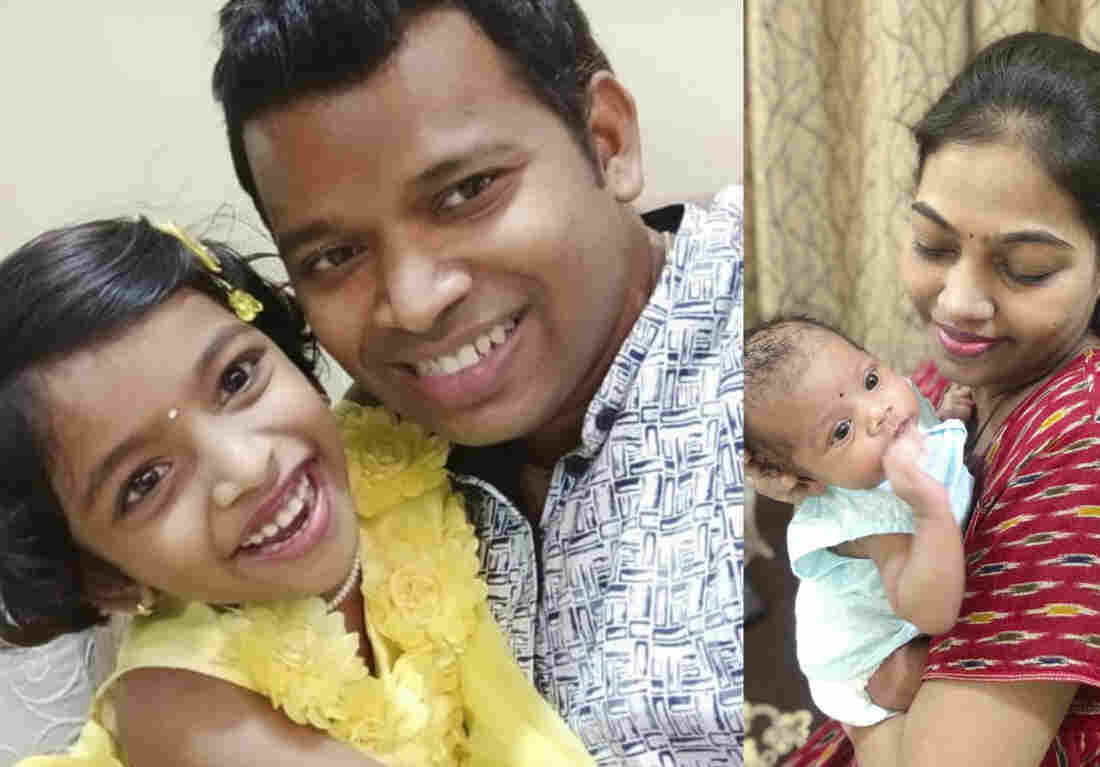 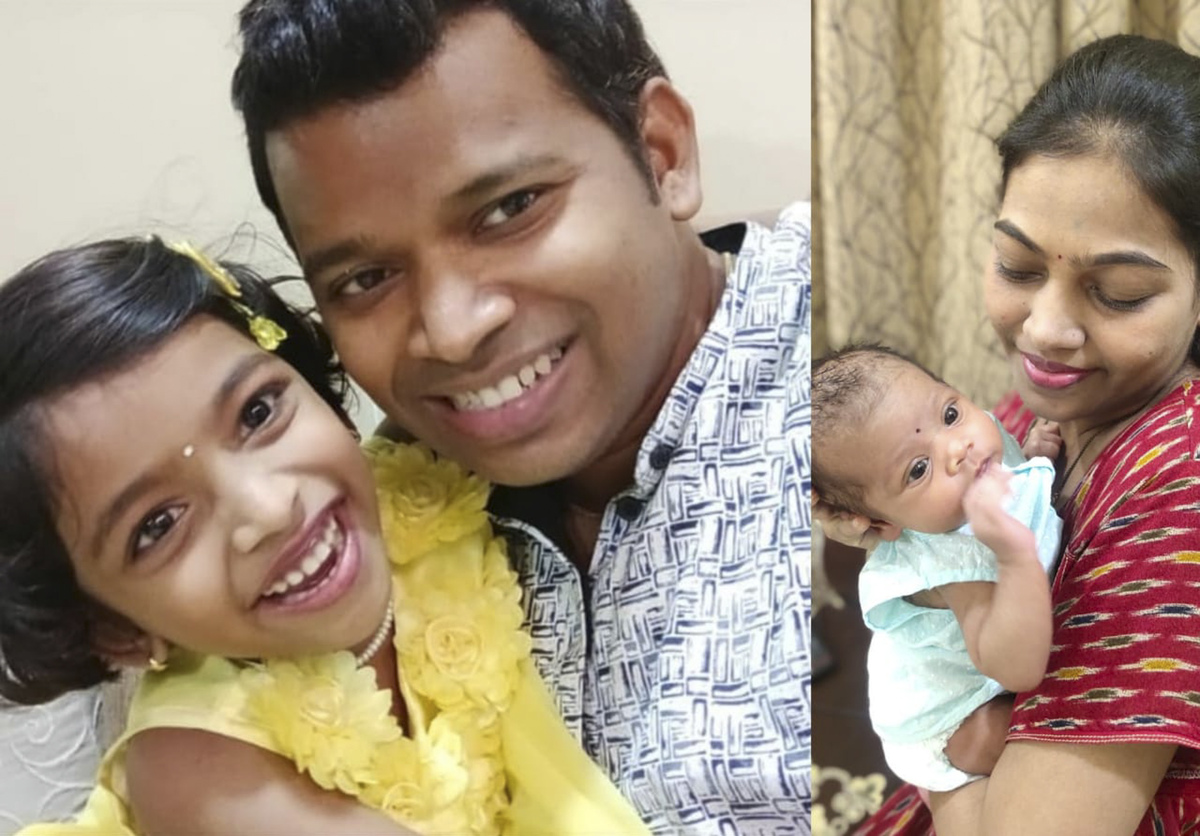 Anup Gabale and Ankita Gabale with their children.

Ankita Gabale tested positive for COVID on March 11. She was eight months pregnant. First came the coughs, then the breathlessness. A week after testing positive she ran a high fever and felt preterm labor pains. A CT scan revealed extreme lung congestion.

Anup says even Ankita’s OB/GYN refused to examine her physically and only wanted to tele-consult.

Out of options, Anup decided to move Ankita to the closest big city, Nagpur, after securing a hospital bed with the help of some contacts. “It was a 10-hour-long journey,” he says. “Despite her very sensitive condition, no doctor wanted to accompany us in the ambulance because she was COVID positive.”

The drive was excruciating. “I was almost unconscious through that journey,” says Ankita. “But I kept talking to my baby, pleading the little one to live and to support me through this.” The next morning, she gave birth to a preterm infant girl.

Getting pregnant women the help they need

On May 3, in Noida, a city bordering Delhi, 23-year-old Vinita Raghav’s oxygen reading plummeted to 63. She was eight months pregnant and admitted to a private hospital for high fever.

“As soon as the COVID test came back positive, the hospital asked us to leave,” says Shubhani, Raghav’s sister. “We then went door-to-door to at least 15 other hospitals. No one wanted to admit Vinita.” After a 12-hour search they found a bed for Raghav at the Kanshiram Government District Hospital in Kasna, Noida — but by then she was in urgent need of a plasma donor. Even though international studies have shown that treatment with convalescent plasma offers no therapeutic benefits in patients admitted to the hospital with COVID, doctors in India were using plasma therapy until recently for patients like Raghav.

When the public health system failed Raghav, community activists rallied to help – using WhatsApp to find Raghav and other pregnant women the support and supplies they need.

“We have received so many requests for pregnant women in urgent need of a ventilator or plasma in the last few weeks,” says Abhinav Tripathi, a volunteer in his 20s who’s part of a network of grassroots WhatsApp COVID assistance groups.

Within seconds of receiving a message requesting help, the information is shared with other WhatsApp groups, asking anyone who is in the area with the capacity to help to come forward.

A few hours after Raghav’s plea for plasma went out to the groups, a donor drove to the hospital to help her. Her condition stabilized shortly after.

“We have a dedicated person to handle pregnant COVID cases, who immediately shares a pregnant women’s needs with WhatsApp groups across India to access urgent help,” says Tripathi. “Sometimes we are successful. But sometimes we get another message within seconds of the first one saying that the mother or both mother and baby died.”

Delays can be fatal.

In Waghmere’s case, by the time she received care, it was too late.

“By the time Minal came to us, she was on day 20 of her infection and there was already 75% lung injury,” says Agarwal. “We intubated her and put her on a ventilator, but she collapsed again and went into a cardiac arrest.”

Doctors performed a peri-mortem C-section as a last resort to resuscitate her and save her baby. It worked for the baby, but Waghmere did not survive. Ivaan was born on April 8, just minutes before his mother died.

“We named him Ivaan as per Minal’s wishes,” says Chetan. “Even as Minal struggled to breathe through COVID, she constantly asked the doctors about the baby’s health. As a mother all she wanted was for her baby to live.”

Priyali Sur is a multimedia journalist based in New Delhi. She has reported extensively on social justice, gender and refugee rights issues in South Asia, the Middle East and Africa. She is the founder of The Azadi Project. She tweets @priyalisur.