In the race for a COVID-19 vaccine, Novavax (NASDAQ:NVAX) would seem to be in fourth place. (And that’s if we exclude the Russian and Chinese vaccine candidates.)

A month later, on Aug. 24, Novavax started vaccinating volunteers in its phase 2 trial. The company plans to initiate a phase 3 trial in September. Right now, the vaccine specialist seems to be about two months behind its larger competitors. So how can it possibly be first to market? 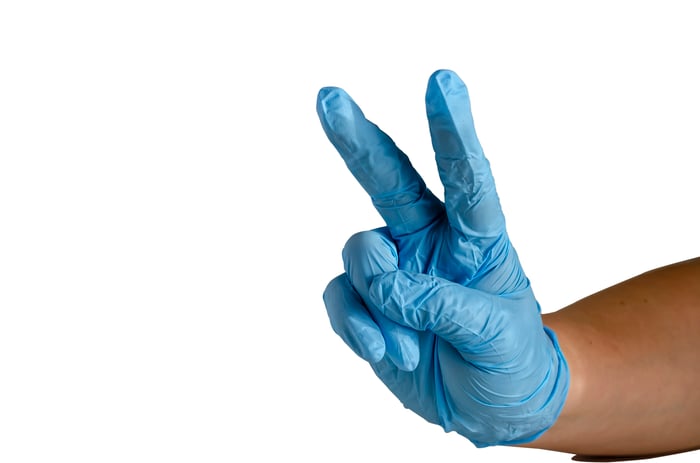 The U.S. Food and Drug Administration (FDA) has a pathway in place to authorize the use of drugs more quickly in an emergency; this is referred to as an Emergency Use Authorization, or EUA. The agency uses this method often to get important drugs to people as fast as possible, and it’s already done so 45 times in the fight against the coronavirus, allowing various healthcare companies to sell diagnostic tests, personal protective equipment, ventilators, and drugs.

In order for a vaccine to be approved by the FDA, the company creating it typically needs positive data from a phase 3 trial, which is often a massive undertaking involving thousands of people. For instance, in the COVID-19 vaccine trials, drug companies are enrolling 30,000 volunteers or more. Johnson & Johnson, which has yet to start its phase 1 trial, has recently announced that its eventual COVID-19 phase 3 trial will recruit 60,000 volunteers around the world.

Recruitment for vaccine studies is not a rapid process. Since July, Pfizer has recruited 11,000 volunteers for its study. At that pace, Pfizer won’t finish enrollment until October. And of course, enrollment is just the beginning of a phase 3 trial. You have to wait a few months to see whether the vaccine works. You have to analyze the data and prepare a submission. Then the agency has to analyze the data. Even if everyone involved rushes things, it’s hard to see how a new drug application could be approved by the end of the year.

An EUA, on the other hand, might get a vaccine on the market by November or December. An EUA might be issued on the basis of strong phase 2 data, or on interim data from a phase 3 trial. And that’s how Novavax might sneak into the market first.

What kind of vaccine data does a biotech need for an EUA?

Phase 1 trial data gives companies a lot of information about their vaccine candidates. Specifically, Novavax now knows that its vaccine candidate (NVX-CoV2373) is safe, and that it increases antibodies in people. In fact, this data was so positive that some analysts have already opined that the candidate is best-in-class. However, the dramatic rise in antibodies created by the candidate doesn’t answer the real question about efficacy: Would the vaccine keep people from getting sick?

To answer that question, any biotech company has to do a pivotal trial. Novavax is prepping for a massive phase 3 trial to start in September with volunteers from around the world, but another important milestone is the relatively smaller 2,665-volunteer phase 2 study that is happening in South Africa right now. That country is experiencing a wintertime surge in COVID-19. In this trial, Novavax is testing for efficacy and safety, measured against placebo.

Who will win the race?

Of course, an EUA will only be issued if the FDA is convinced from the existing trial data that the vaccine candidate is safe and effective. Novavax has as good a shot as anybody to win that battle, given that its candidate works in traditional ways and the company has experience with other virus outbreaks like Ebola and SARS. (Indeed, Novavax has vaccines for both diseases in its pipeline.)

AstraZeneca licensed its vaccine technology from Oxford University. Some critics have suggested it did not really work in animal trials, given that all of the vaccinated monkeys became infected when COVID-19 was introduced into their systems. Meanwhile, both Moderna and Pfizer are relying on mRNA technology, a new method that has a lot of promise in vaccine development — but also some risks. The FDA has yet to approve any mRNA vaccines, which are unstable and must be kept at negative 80 degrees Celsius or they degrade. (Novavax’s vaccine can be kept in a refrigerator.)

The government program designed to speed up vaccine development, Operation Warp Speed, wants a vaccine ready by January. None of these companies are likely to have a full phase 3 data set by the end of the year. But all of them will have partial data on their candidates’ safety and efficacy in people. With this data, the FDA should be able to decide whether to grant an EUA or not.

While Novavax is about two months behind its competitors, the biotech that receives the EUA will be the one with the best safety and efficacy data in a late-stage trial. So Novavax is still very much in the race.