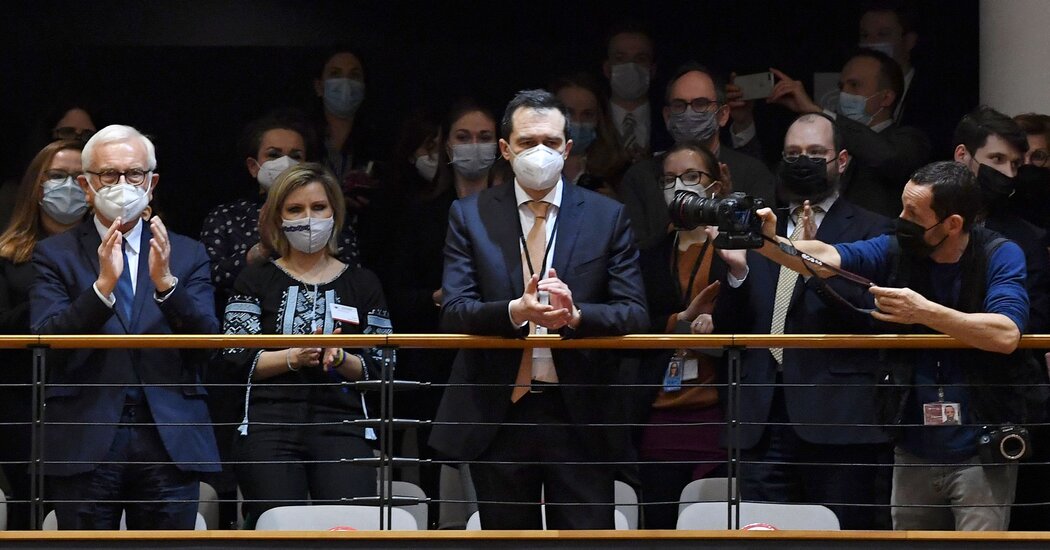 It was an impassioned plea: President Volodymyr Zelensky of Ukraine this week asked for his country to join the European Union, the world’s biggest trading bloc, which also has helped preserve peace in Europe for decades.

“We have proven that at a minimum we are exactly the same as you,” he told the European Parliament on Tuesday. “So do prove that you are with us, do prove that you will not let us go, do prove that you indeed are Europeans.” A day earlier, he submitted a formal application for Ukraine’s admission into the union, which is headquartered in Brussels, the Belgian capital.

With Russian forces violently pushing into Ukraine, Mr. Zelensky’s request was warmly received by Ursula von der Leyen, president of the European Commission, the E.U.’s executive branch, who proclaimed on Monday that Ukraine is “one of us and we want them in the European Union.”

However, her words of encouragement were largely symbolic, and Mr. Zelensky’s E.U. aspirations aren’t likely to be satisfied any time soon: Joining the bloc is a painstaking and arduous process that can take as long as a decade.

Poland, for example, made a formal request to join the bloc in 1994 and was finally admitted in 2004.

To join, a country needs its candidacy to be unanimously approved by all E.U. member states, which now number 27. It must also make its political system, judiciary and economy compatible with the bloc by adopting the E.U.’s system of common law, as well as more than 80,000 pages of rules and regulations on everything from environmental standards to food hygiene rules.

One senior E.U. official explained that it can take as long as 18 months for the European Commission to evaluate a country’s application before it goes to member countries.

And while there are precedents for fast-tracking — Sweden and Finland managed to join the Union in a few years after applying — a speedy approach is rare. Moreover, other countries have been waiting for years to join, including Albania, Bosnia and Serbia, making it difficult for the E.U. to move faster on Ukraine.

Beyond that, the E.U. also has expansion fatigue after being buffeted by economic crises, Brexit and the pandemic, as well the misbehavior of rule-breaking member countries like Hungary.

At the moment, Ukraine hasn’t been made an official candidate, but rather has an association agreement with the E.U., signed in 2014 and concluded in 2017, in which it agreed to intensify economic and political ties with the bloc.

Ukrainians have been ardent in wanting to forge closer links with Europe, and in 2013, hundreds of thousands of them took to the streets to protest when the president at the time, Viktor F. Yanukovych, who leaned toward Russia, backtracked on signing an association agreement with the union.

Whatever the challenges for Ukraine’s E.U. hopes, Russia’s aggression has engendered an outpouring of solidarity in the bloc, drawing some of the toughest sanctions in its history. East and central European countries like Poland and the Baltics, which lived for decades behind the Iron Curtain and where memories of Russian subjugation run deep, have been among the most enthusiastic in backing Ukraine’s membership.

Most Europeans welcomed the E.U.’s eastward expansion in May 2004, when the bloc admitted 10 mostly former Communist countries — including the Czech Republic, Hungary and Poland — because, among other reasons, it cemented the demise of the Soviet bloc, and helped spread economic and political liberalism across the continent.

The European Union’s ability to offer membership to a country has been one of its greatest foreign policy tools in the post-Cold-War world. The prospect of joining motivated Bulgaria and Romania to tackle corruption and accelerated the arrest of war criminals in Croatia, Serbia and Montenegro.

Even though Ukraine’s E.U. membership process is likely to be gradual, the country’s attempt to forge closer ties with NATO and the European Union underlines that President Vladimir V. Putin’s attempt to bring Ukraine back into Russia’s orbit by force appears to be having the opposite effect.