Why California Gas Prices Keep Rising Despite a National Drop 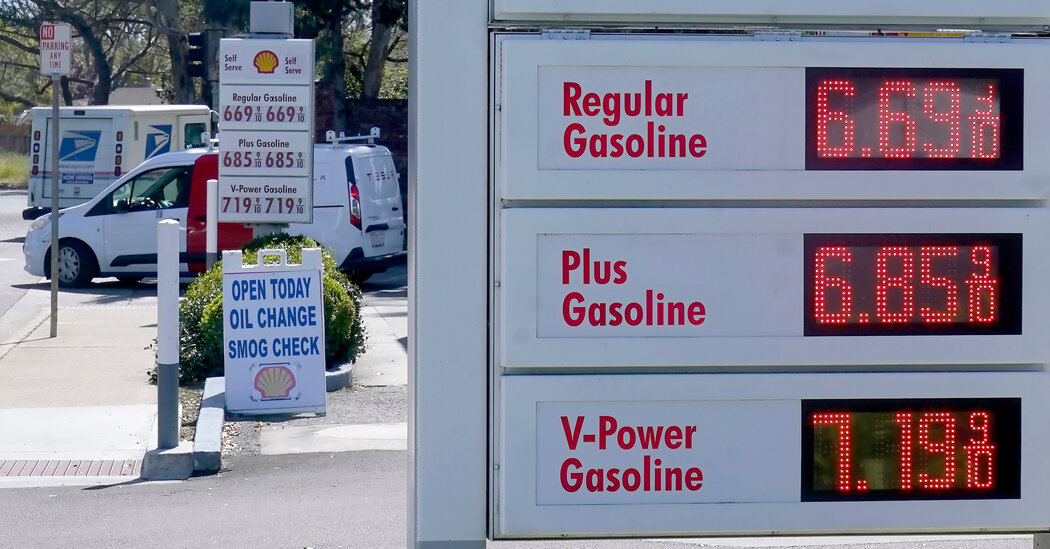 First, the good news: After sharply climbing and reaching a peak on March 11, the average price of a gallon of gas in the United States has begun to decline.

The bad news: Not in California.

Here, gas prices have continued to break records. On Thursday, the average cost of a gallon of regular unleaded reached $5.882, a new high, according to AAA. In the Los Angeles area, the price at the pump topped $6.

So what’s going on?

As you undoubtedly know, gas prices in California have long been higher than elsewhere in the nation — about $1.20 more per gallon compared with the rest of the nation last year, said Severin Borenstein, a University of California, Berkeley, economist who studies fuel prices.

That’s mostly because of our high gas taxes and the costs of regulatory programs aimed at reducing greenhouse gas emissions. Borenstein has also written about some harder-to-account-for fees.

But none of that explains why gas prices in California keep rising as the average national price wanes. The price of crude oil has dropped since a major spike in late February.

Borenstein said that California’s persistent high prices appeared to be linked to a disruption in the state’s gasoline supply chain.

Refineries turn crude oil into gasoline and ship it to the Golden State to be sold. California requires a special, cleaner fuel blend that’s used only here.

Typically, the bulk price of fuel coming into California’s ports is about 10 cents higher per gallon than in other states. But for at least a few weeks, it has been 80 to 90 cents more expensive, Borenstein said.

“Even as the crude oil price is dropping, it appears that some problem has occurred in the refinery sector to make California-blend gasoline,” he told me. “I don’t know what the problem is or how quickly it will be fixed, but that’s definitely why our prices are more out of line than usual with the rest of the country.”

It’s unclear where exactly the production squeeze is coming from. Hundreds of workers went on strike this week at a Chevron Corp. refinery in Richmond, but the unusually high wholesale gas prices predate that, Borenstein said.

Regardless of the reason, the soaring gasoline costs have garnered plenty of political attention. Though fuel accounts for only a small share of consumers’ overall spending, it tends to have an outsize impact on people’s perceptions of the economy. (Blame the signs alongside every highway in America.)

On Wednesday, Gov. Gavin Newsom unveiled a $9 billion proposal to send registered vehicle owners $400 debit cards to defray the high costs of gasoline. A person could get $800 total for up to two cars.

“That direct relief will address the issue that we all are struggling to address — and that is the issue of gas prices,” Newsom said in a video posted to Twitter.

Newsom has previously proposed halting an increase to the state’s gas tax that is set to take effect in July. Republican leaders in the state have suggested suspending all state gas taxes for six months. There’s also a separate proposal by Democratic leadership to give households making up to $250,000 at least $200 in a gas tax rebate.

No one knows when California’s gas prices will stop inching upward. A shortage of California-blend gasoline could be solved by increasing imports, but it could take about a month to get those additional supplies, Borenstein said.

And there may be another factor at play here too.

Compared with people in other states, Californians are generally less likely to seek out cheaper gas stations, and instead they tend to just splurge for the pricier fuel, Borenstein said. That gives sellers less of an incentive to lower prices, so perhaps that’s why they haven’t done so yet.

“Part of it seems to be that Californians are less willing to drive the extra block to get the cheaper gas,” he said.

How Russia and right-wing Americans converged on war in Ukraine.

Smashed carrots with feta and mint.

“From its low-tech splash page to its mystic (if tiny) halls and peculiar displays, the MJT is a work of art disguised as a pocket museum. Shoehorned between a yoga center and a bus stop, it’s an award-winning fantasy of what an institution of historical and scientific knowledge might be — if it included portraits of Russian space dogs and a tea shop.”

In March 2020, as so many indoor entertainment venues shuttered, so did the Bob Baker Marionette Theater in Highland Park in Los Angeles.

The troupe, founded in 1963, pivoted to Zoom shows to offer puppet-making lessons as well as behind-the-scenes backstage tours. But in late 2021, it seemed that no number of creative gambits could stave off the permanent closure of the theater, The Los Angeles Times reported.

So the theater staff made a desperate plea on social media for financial help from the public. And late last year, the troupe was finally able to invite audiences back in.

“It was really sweet to reopen,” Winona Bechtle, the director of development, told the newspaper. “But it also felt like people never left.”