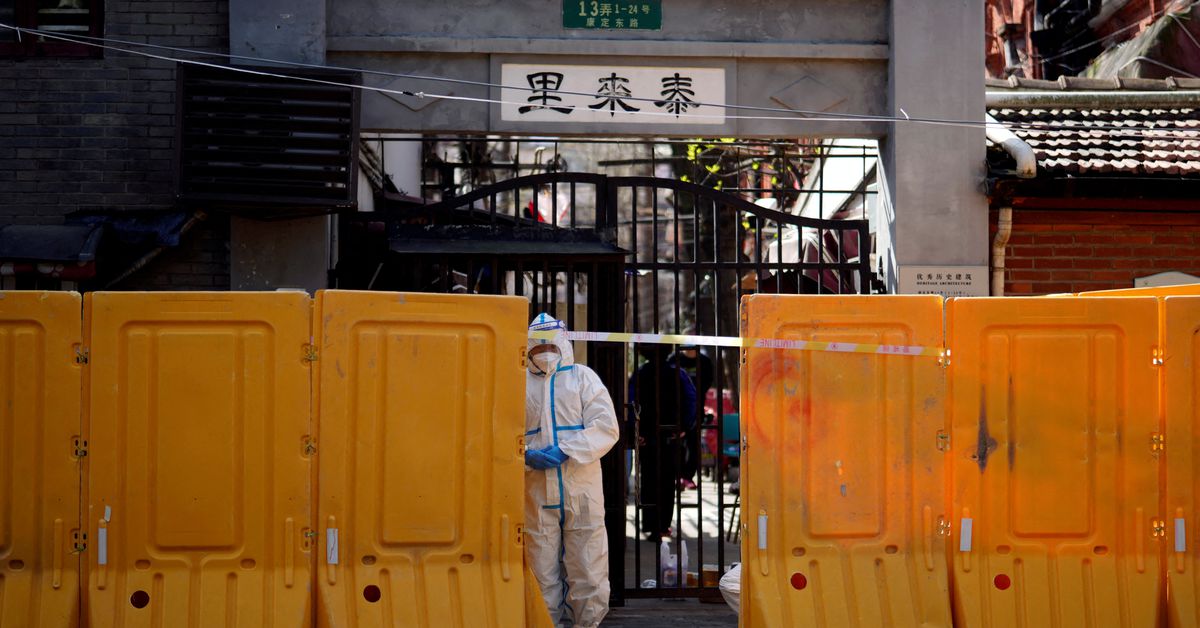 SHANGHAI, April 5 (Reuters) – Chinese authorities on Tuesday extended a lockdown in Shanghai to cover all of the financial centre’s 26 million people, despite growing anger over quarantine rules in the city, where latest results show only 268 symptomatic daily COVID-19 cases.

In a major test of China’s zero-tolerance strategy to eliminate the novel coronavirus, the government widened the lockdown to eastern parts of the city and extended until further notice restrictions in western districts, which had been due to expire on Tuesday.

The broader lockdown came after testing saw asymptomatic COVID-19 cases surge to more than 13,000. Symptomatic cases fell on Monday to 268, from 425 the previous day.

As a growing number of members of the public shared comments and videos across social media expressing frustration with the blanket lockdown, authorities showed no sign of wavering.

“Shanghai’s epidemic prevention and control is at the most difficult and most critical stage,” Wu Qianyu, an official with the municipal health commission, told a briefing.

“We must adhere to the general policy of dynamic clearance without hesitation, without wavering.”

Shanghai’s quarantine policy has been criticised for separating children from parents and putting asymptomatic cases among those with symptoms. Wu did not comment on the uproar over family separations. On Monday she insisted that children who tested positive had to be kept apart.

One temporary treatment centre opened a 1,000-bed section for treating parents and children, the Shanghai Children Medical Center said on its social media account, but it was not clear if the new section indicated a wider change of policy.

Shanghai residents organised an online petition calling for asymptomatic children to be allowed to isolate at home, with at least 1,000 people signing but as of Tuesday, it was no longer accessible on the WeChat messaging app.

The city has set up about 47,700 beds in a number of newly built temporary hospitals in Shanghai, with another 30,000 being readied, state news agency Xinhua reported on Tuesday, citing Gu Honghui, deputy secretary general of the municipal government.

A total of 62 temporary quarantine sites have been designated in hotels, stadiums and exhibition centres, said Gu.

A worker in a protective suit stands behind barriers sealing off a residential area under lockdown, following the coronavirus disease (COVID-19) outbreak in Shanghai, China March 29, 2022. REUTERS/Aly Song/File Photo

Shanghai imposed tough restrictions last week as it struggled to contain what has become its biggest COVID outbreak, after originally taking a more targeted approach.

Shanghai reported a record 13,086 new asymptomatic coronavirus cases on Monday, authorities said, up from 8,581 the previous day, after more than 25 million people were swabbed in 24 hours in the city-wide testing campaign.

Thousands of residents have been locked up in rudimentary quarantine facilities after testing positive, whether they are symptomatic or not.

Jane Polubotko, a Ukrainian marketing manager being held in the city’s biggest quarantine centre, told Reuters it was not clear when they would be released.

“Nobody knows how many tests we need to get out,” she said.

Chen Erzhen, a doctor in charge of one Shanghai quarantine facility, said in an interview with the Communist Party newspaper the People’s Daily at the weekend that it was possible that authorities would revise guidelines and allow asymptomatic people to stay home, especially if the number of cases mounted.

“The most important thing is the problem of personal compliance,” he said.

Sun Chunlan, vice-premier in charge of COVID prevention, urged grassroots Communist Party organisations to “do everything possible” to help residents solve problems, such as access to medicine, food and water.

The government said almost 80% of a total of 25.7 million swabs had been tested by Tuesday morning. Positive results are followed up on an individual level.

The proportion of asymptomatic cases is far higher in Shanghai than the rest of the world, which has been attributed to a screening process that catches infected people before they become ill. However, experts said it did not explain the fall in symptomatic cases.

Meanwhile, the costs to the world’s second-biggest economy mount.

Some 23 Chinese cities are under total or partial lockdown, affecting an estimated 193 million people in areas accounting for 13.6% of its gross domestic product, the Nomura brokerage said in a note on Tuesday.