Who Won, Who Lost and What Was Too Close to Call in Texas Primaries – The New York Times 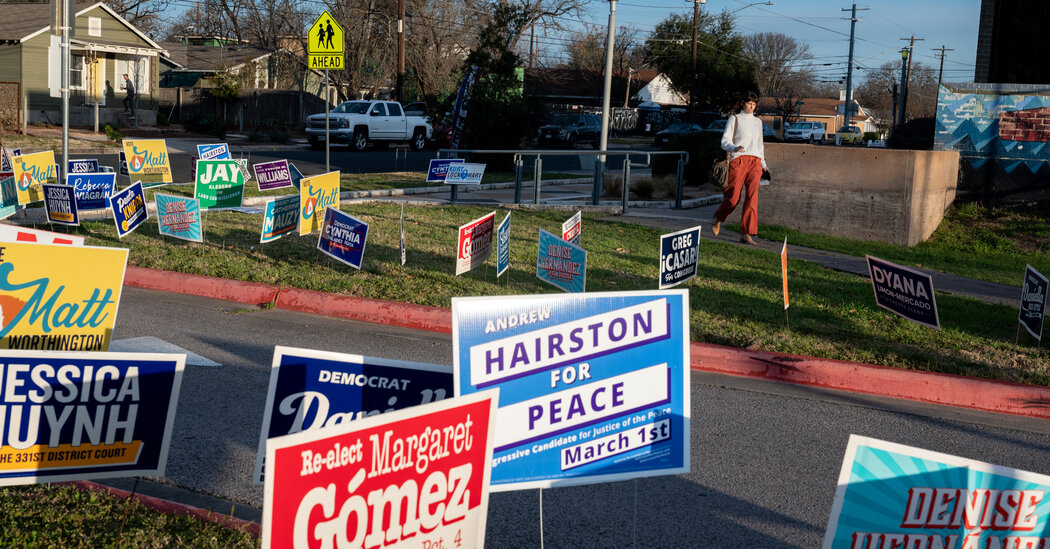 A Republican military veteran has the lead in a deep-red House district.

Morgan Luttrell, a former Navy SEAL who worked for the Energy Department under President Donald J. Trump, appeared to be on track to win the Republican primary in the 8th Congressional District, a Houston-area G.O.P. stronghold where an incumbent is retiring. As of 1 a.m., he had about 53 percent of the vote — more than double the share of the runner-up, Christian Collins, with the only question being whether Mr. Luttrell would stay above the 50 percent mark to avoid a runoff.

Mr. Luttrell and Mr. Collins did not differ much on policy. But Mr. Collins and his supporters — including Senator Ted Cruz of Texas, Representative Marjorie Taylor Greene of Georgia and the campaign arm of the right-wing House Freedom Caucus — sought to frame the race as a contest between the Trump base, to which he laid claim, and the Republican “establishment,” which he accused Mr. Luttrell of representing.

In Texas’ last swing district, Republicans made a choice and Democrats were split.

Monica de la Cruz, a Trump-endorsed candidate, won the Republican primary in the 15th Congressional District, which stretches some 250 miles from San Antonio to the Mexican border and is the only competitive House seat left in Texas after Republican gerrymandering.

The Democratic primary was clearly headed for a runoff, with no candidate breaking even 30 percent, but it was not clear who would advance. Ruben Ramirez, a lawyer and Afghanistan veteran, had a fairly comfortable lead for the first spot as of 1 a.m., but several competitors were within striking distance of the second spot.

Cuellar and Cisneros are headed to a runoff.

The rematch between Representative Henry Cuellar, one of the most conservative Democrats in Congress, and Jessica Cisneros, a progressive challenger who almost unseated him in 2020, in South Texas’ 28th Congressional District isn’t over yet: The two will face again in a runoff.

Ms. Cisneros — who has been endorsed by Senator Bernie Sanders, Senator Elizabeth Warren, Representative Alexandria Ocasio-Cortez and other progressive leaders — came within four percentage points of beating Mr. Cuellar in 2020. This year, Mr. Cuellar may have been hurt by an investigation that involved an F.B.I. raid of his house in January, the details of which have not been disclosed.

Another progressive candidate, Tannya Benavides, was hovering just under 5 percent of the vote.

A democratic socialist won a House primary in Austin.

Greg Casar, a progressive Democrat, won decisively in the 35th Congressional District, beating State Representative Eddie Rodriguez. The Austin-based seat is solidly blue and is being vacated by Representative Lloyd Doggett, who chose to run in a neighboring district after lines were redrawn this year.

Mr. Casar, a member of the Austin City Council, was backed by Justice Democrats and Ms. Ocasio-Cortez, and his victory speaks to the leftward shift of the Democratic base. He is affiliated with the Democratic Socialists of America, though the group’s Austin chapter withdrew its endorsement last month after he said he supported military aid to Israel.