Who Won the VP Debate? Experts Weigh In 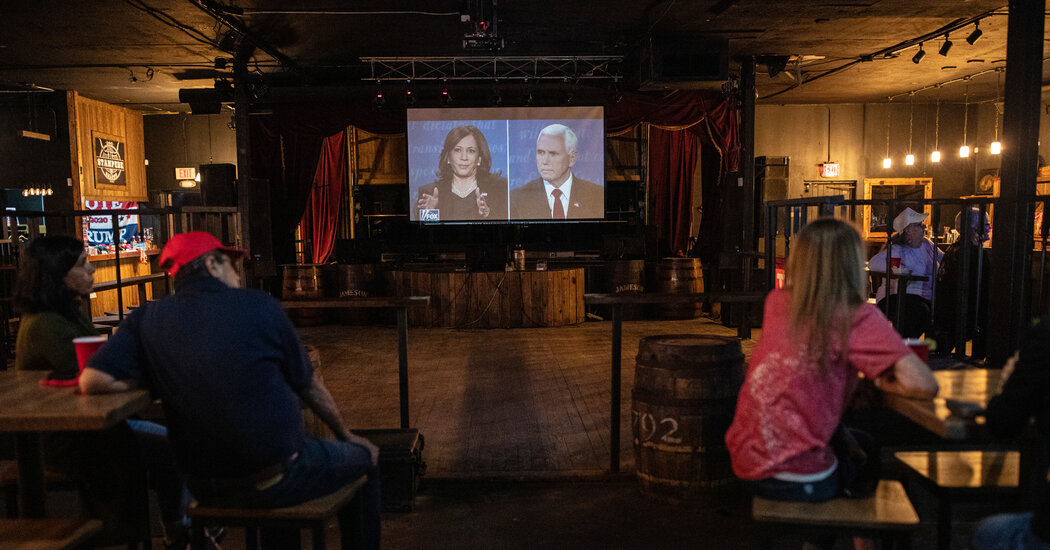 Last week’s presidential debate was a unique moment in a deeply divided nation, when most Americans seemed to agree that whatever they were seeing, it wasn’t good for anyone — Republican, Democrat or otherwise.

The vice-presidential debate on Wednesday night seemed to accomplish the opposite, driving people back into their partisan corners. And how you viewed the candidates depended mostly on your partisanship.

In that sense, there was no clear winner or loser. There was just another televised airing of differences — often acrimoniously — over President Trump’s leadership and record, not that different from what Americans see on cable news every day. Republicans cheered Vice President Mike Pence; Democrats praised Senator Kamala Harris. And few minds were changed.

“Partisans on both sides will like what their candidate did, dislike the other candidate, and no minds will change,” said Bruce Haynes, a Republican strategist, who doubted that the debate would have any effect on undecided voters.

When Mr. Trump selected Mr. Pence as his running mate four years ago, the decision was in large part because of the differences between the two. More reserved in style and practiced in political speechmaking, Mr. Pence has always been skillful in smoothing out his boss’s rougher edges.

“Trump should let Pence sub for him at the next debate,” said Rich Lowry, the editor of National Review.

Ben Shapiro, the conservative writer and podcast host, said: “See, what Pence is doing tonight is what the Trump administration would look like without Twitter. And it is GOOD. VERY GOOD.”

Ned Ryun, a conservative strategist, wrote of the vice president’s low-key style, “Man is shiving people left and right with a smile.”

While many of the vice president’s critics expressed frustration that he had often ignored the questions from the moderator, Susan Page of USA Today, his supporters noted the same tendency to evade — and were impressed. “Susan, allow me not to answer your question,” said Guy Benson, a conservative writer and radio host.

But Mr. Pence’s tendency to evade the truth on certain questions earned him scorn from some. “Why is it that Mike Pence doesn’t seem to have to answer any of the questions asked of him in this debate?” asked Representative Alexandria Ocasio-Cortez of New York.

Others noted his tendency to interrupt both Ms. Harris and Ms. Page. “Every woman” knows what it’s like “to be interrupted by an incessant mansplainer,” wrote Brittney Cooper, a professor of women’s studies at Rutgers.

Ms. Harris’s previous career as a prosecutor is something she and her supporters often highlight. And her ability to lash her opponent with effective one-liners provided some of the more memorable moments of the evening. “Biggest breakthrough sound bite: Harris wins,” wrote Mike Murphy, a Republican strategist who has been highly critical of the president and the vice president. “‘If you have preexisting condition they are coming for you.’”

Hanging over the assessments and perceptions of Ms. Harris’s performance was the historic nature of her candidacy. Never before had a woman of color participated in a presidential or vice-presidential debate, leaving many to wonder whether she would be judged harshly for being animated or emotional, and to praise her for navigating those difficult waters.

“The needle Kamala threaded tonight as a Black woman needs to be acknowledged,” said Natasha Rothwell, a screenwriter. “How we’re perceived is based on a short list of ‘permissible’ behavior. She was strong, uncompromising and authentic without falling for bait meant to cast her as an ‘angry black woman.’ I’m in awe.”

Van Jones, a commentator on CNN, had a similarly positive assessment. “Between the moderation and Pence taking up so much ground, Kamala handled a terrible situation masterfully,” he wrote.

But Frank Luntz, a Republican pollster, reported that in his focus group after the debate, impressions of Ms. Harris were generally unfavorable, including “evasive,” “snarky” and “unpresidential.” Acknowledging the racial sensitivity of the issue, he wrote: “I might get #cancelled for this, but my undecided focus group doesn’t like how Kamala Harris interacts with her opponent. We saw this in the Dem debates — she is applauded for her knowledge, but they just don’t like her ‘condescending reactions.’”

The inability of Chris Wallace, the moderator at last week’s debate, to control the conversation led to widespread calls for the Commission on Presidential Debates not just to set new ground rules but also to enforce them with penalties of some kind. Those cries grew louder on Wednesday night after Ms. Page tried and failed to cut the candidates off — mostly Mr. Pence, as he continued to speak despite her insistence that his time was up.

“Is anyone tracking time?” asked Brad Woodhouse, a Democratic strategist.

Bob Shrum, a Democratic strategist, wrote, “Need a microphone cut off, or Biden shouldn’t show up for next debates.”

Jennifer Rubin, an opinion writer for The Washington Post, acknowledged Ms. Page’s thankless task in policing the candidates, as well as the commission’s powerlessness in the matter, saying: “Page is a fine journalist, but she lost control of the debate and too often allowed Pence to interrupt and go over time limits. The presidential debate commission can’t enforce its rules. Time for it to close up shop.”