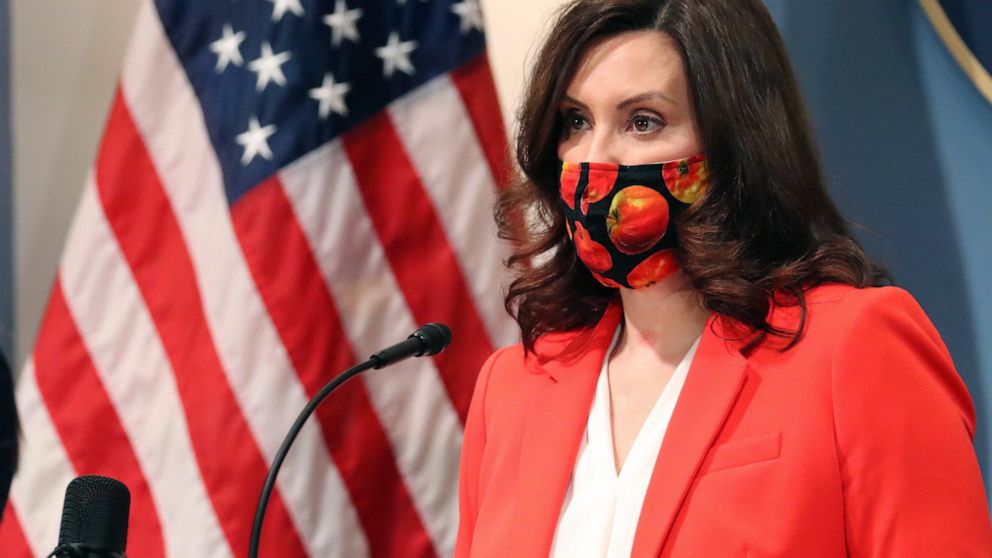 Gov. Gretchen Whitmer is facing criticism after the disclosure of two additional employment-separation deals for former top officials, a day after a $155,000 payout to Michigan’s ex-health director Robert Gordon came to light

LANSING, Mich. — Michigan Gov. Gretchen Whitmer faced growing criticism Tuesday after the disclosure of two additional employment-separation deals for former top officials, a day after her administration acknowledged that a key leader in the state’s response to the coronavirus pandemic was paid $155,000 following his sudden resignation.

Ex-Unemployment Insurance Agency Director Steve Gray, who resigned in November after falling out of favor with the governor, received nearly $86,000 in severance, according to his agreement. The Associated Press obtained a copy through a public-records request. As part of the deal, both sides agreed to maintain confidentiality about Gray’s employment and departure.

Sarah Esty, a deputy director in the state Department of Health and Human Services who quit in late January, also had a separation pact. Such deals appear to be highly unusual in state government.

Former DHHS Director Robert Gordon, who issued sweeping COVID-19 restrictions after the Democratic governor’s emergency orders were upended by an October court ruling, abruptly resigned Jan. 22. At that time, Whitmer would not say if she had sought his exit.

But his Feb. 22 severance pact, uncovered Monday as part of newspapers’ open-records requests, suggested he was forced out. The $155,506 payout covers nine months of salary and his payments to continue health coverage. The parties agreed — “in the interest of protecting deliberations among government officials” — to maintain confidentiality regarding the departure of Gordon, who agreed not to sue the state.

On Jan. 29, a week after Gordon’s exit, Etsy signed a deal with the health department’s human resources director in which she was placed on paid administrative leave until Feb. 26, at which point she resigned. That contract, which was first reported by The Detroit News, has no confidentiality provision. She made $156,060 a year, so the extra month’s pay was about $12,000.

“We have an executive, a Cabinet member, who’s being paid to not talk,” said Rep. Matt Hall of Marshall. “He knows a lot about how these decisions are made. … Why did you make these hush-money payments?”

Whitmer bristled at the characterization, without saying why Gordon got the payout.

“Separation agreements are used often in the public and private sector when someone in a leadership position leaves an organization,” she said. “Due to the nature of the agreement, there’s not a lot more than I can say on the subject. However, I do want to say this. There were not any improprieties with director Gordon’s work. It’s simply that he tendered his resignation and I accepted it.”

At least one GOP legislator pledged to try to prevent Whitmer from entering into future taxpayer-funded separation deals that “silence” departing officials. Rep. Annette Glenn, a member of the House Appropriations Committee, said she will add a provision to the Environment, Great Lakes and Energy budget bill and encourage other subcommittee chairs to do the same for all other department budgets.

Thomas Shaver, Freedom of Information Act coordinator for the Department of Labor and Economic Growth — which oversees the unemployment benefits agency — said Gray was a classified employee with a contract through June 1. The $85,872 sum equals nearly seven months of pay. About $9,200 of the payout went to Gray’s lawyer. Gray agreed not to file a lawsuit against the state.

Aides to Whitmer’s predecessor, Republican former Gov. Rick Snyder, said they were unaware of similar severance arrangements with top departing officials. Snyder was known to shift people from high-level jobs to other state positions, however.

In 2014, Whitmer — then the Senate minority leader — called for an independent review after former state Treasurer Andy Dillon made the same salary for three months after resigning. He worked as an adviser to his successor during that period. Whitmer said taxpayers deserved to know that the department was “being run in a fiscally responsible manner.”

“I’ve served in government a long time, and I believe that elected chief executives need to make final decisions about policy with confidential advice,” he said. “They also need to be comfortable with their agency heads. Since the pandemic began, many leadership changes have happened in other states. It’s no surprise they would happen in Michigan.”