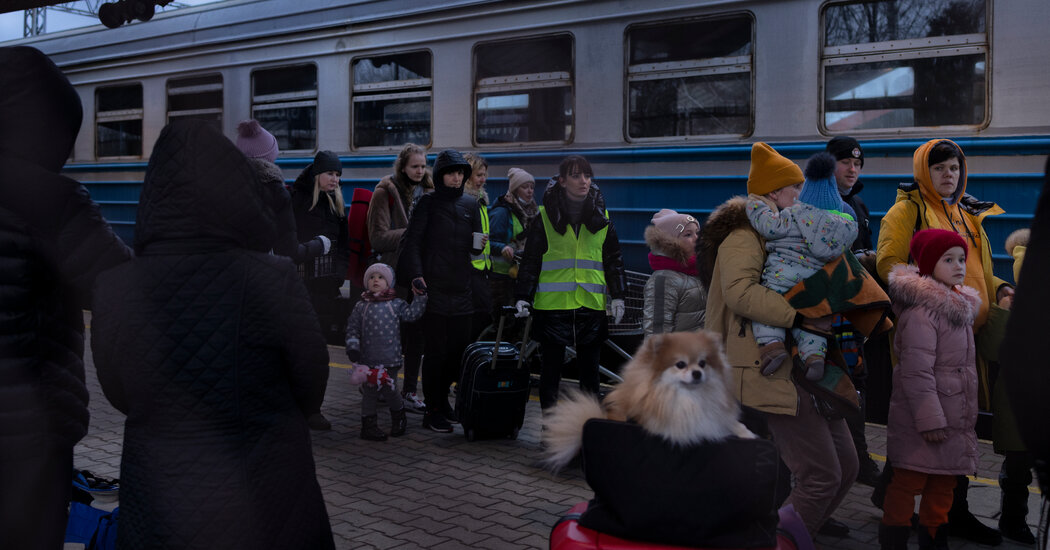 WASHINGTON — The Biden administration has asked Congress for $32.5 billion in emergency spending to bolster the federal response to the coronavirus pandemic and support Ukraine in its fight against Russia’s invasion.

The administration requested $10 billion in humanitarian and military aid for Ukraine, which was nearly $4 billion more than an initial amount floated late last month, underscoring how rapidly the country’s need for aid has grown as Russian forces continue their attack.

As part of its new coronavirus response strategy, the administration also requested $22.5 billion for additional vaccines, oral antivirals and monoclonal antibodies, testing, and support for the global vaccination effort.

Officials hope to include both pieces of emergency aid in a sprawling catchall spending package that would fund the government for the remainder of the fiscal year. Congress has until March 11, when funding is set to lapse, to hammer out the details of a deal on the dozen bills needed to keep federal money flowing.

In a letter on Wednesday, Shalanda Young, the acting director of the Office of Management and Budget, urged Congress to “act expeditiously” on the request.

Lawmakers have struggled to reach a spending agreement for the current fiscal year, which began in October and is already almost halfway over. They have been haggling over how much money to direct to the Pentagon and key domestic programs.

In her letter, Ms. Young urged lawmakers to meet the March 11 deadline in order to increase funding for the Defense Department and other agencies, in part because the government is still functioning with spending levels negotiated in late 2020, before President Biden took office.

Key lawmakers suggested the proposed aid for Ukraine could help encourage a resolution to disputes that might otherwise hamper the funding talks, which have dragged on for months.

“The sense of urgency around this is made stronger because of the need to get the dollars over there and get the military aid there,” said Senator John Thune of South Dakota, the No. 2 Republican.

“Having that in there is helpful, both in terms of votes, but also probably in terms of timing,” he added.

White House officials initially floated a $6.4 billion request for Ukraine, but lawmakers in both parties quickly called for more aid as Russian forces bombarded the country.

The $10 billion request includes $4.8 billion in additional funds for the Pentagon to cover the deployment of U.S. troops to NATO countries, to increase intelligence and cybersecurity support, and to replenish the military’s supply of weapons in response to arms being sent to Ukraine.

The request also includes $4.25 billion in new funding for economic and humanitarian assistance to help provide support for Ukrainians, including the one million refugees who have already fled the country in the first week of President Vladimir V. Putin’s invasion. And it includes money to enforce some of the economic penalties that the Biden administration has already imposed, including sanctions on Russian oligarchs and restrictions on Russia’s access to high-tech goods.

The request for additional Pentagon funding may sour a number of conservative lawmakers, who have argued that the bulk of any new military aid should be spent on sending new lethal aid to Ukraine, rather than the deployment of additional U.S. troops or the replenishment of U.S. stockpiles of weapons.

And Republicans were quick to pan the request for $22.5 billion in coronavirus aid, arguing that Congress already allocated plenty of money for responding to the pandemic in the $1.9 trillion coronavirus aid package that was enacted last year without any Republican votes.

“I think some of the requests are reasonable, but it doesn’t take new money,” said Representative Tom Cole, Republican of Oklahoma and a member of the Appropriations Committee.

The request is intended to support the administration’s plans to continue fighting the spread of Covid-19, as well as preparing for new variants and efforts to combat the virus abroad as new U.S. cases decline.

Democrats warned that opposing the aid would jeopardize the country’s efforts to return to a semblance of normalcy and stop the spread of the virus and additional variants.

“The $22 billion for Covid is absolutely necessary; in fact, we probably will need more as we need more therapies,” Speaker Nancy Pelosi said at her weekly news conference.

She added of Republicans, “I would hope that they would see the wisdom of the science of what we need to do in terms of Covid.”