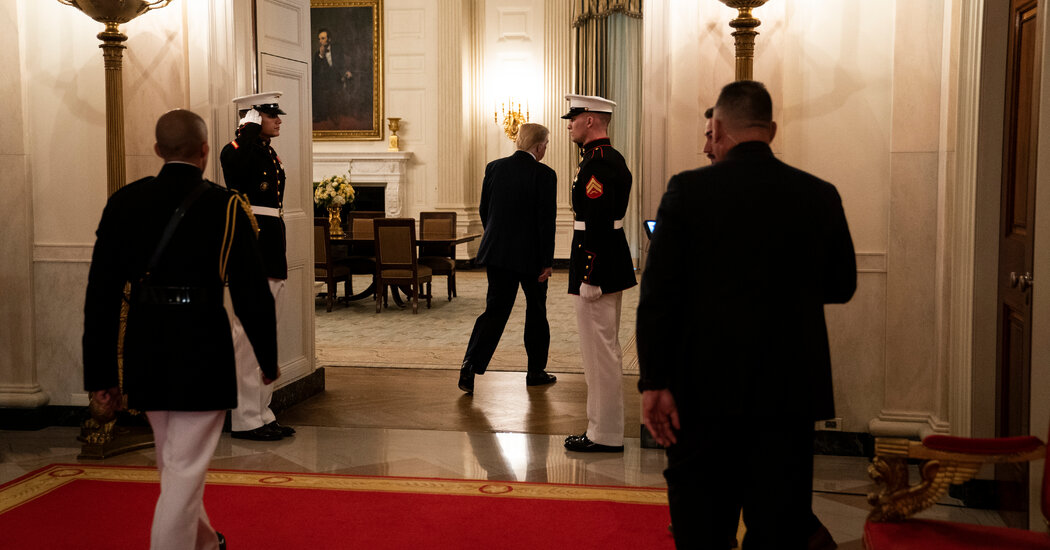 WASHINGTON — The Trump administration pushed back on Wednesday against widespread criticism that its staging and filming of events at the White House used as programming for the Republican convention was illegal — dismissing arguments that it had violated the Hatch Act, a law intended to prevent the use of public power for private political gain.

“Nobody outside of the Beltway really cares,” Mark Meadows, President Trump’s chief of staff, said in an interview with Politico. “This is a lot of hoopla that is being made about things mainly because the convention has been so unbelievably successful.”

Mr. Meadows made his comments the morning after the Republican National Convention aired two official ceremonies staged earlier on Tuesday on the White House grounds — a pardon performed by Mr. Trump and the naturalization of new citizens performed by Chad F. Wolf, the acting secretary of homeland security, as Mr. Trump watched and chatted with them.

During the convention, Secretary of State Mike Pompeo gave a speech from Jerusalem, in an apparent violation of separate State Department rules, and the first lady, Melania Trump, delivered a speech from the Rose Garden.

Mr. Meadows also said that “you can’t break the law — you shouldn’t do it,” but suggested that the Hatch Act was outdated. The White House put forward a legal theory for why the two ceremonies were not Hatch Act violations, saying its role in staging them and posting videos of them on YouTube was an official act unrelated to the campaign’s decision to then use the publicly available material for political purposes.

But a range of legal and ethics experts agreed that the administration was blowing through the spirit of the Hatch Act. That law, enacted in 1939 and revised several times, imposes civil and criminal prohibitions aimed at barring officials from using their official powers to commandeer public resources for partisan political activities.

The ideals advanced by the law and related rules, like the State Department’s policies, are intended to keep some government activity relatively detached from campaign politics. That includes protecting government employees down to staff members who perform tasks like putting out chairs for White House events from being coerced into performing work to elect a particular candidate, and ensuring that American diplomats are seen abroad as speaking for the entire country.

“These activities are precisely what the Hatch Act is about,” said Jonathan Turley, a George Washington University law professor who testified as a Republican witness during the impeachment of Mr. Trump. “The president has erased these principled lines of separation between the political and governmental functions of executive officials.”

Whether any of the administration’s actions also clearly violated the letter of that law, or instead fell into a gray zone, was a subject of greater debate.

“The pardon and naturalization ceremonies appear to be brazen violations of the criminal provisions of the Hatch Act,” said Kathleen Clark, a law professor at Washington University in St. Louis who specializes in government ethics.

She and Daniel Jacobson, who worked on Hatch Act issues for the Obama White House, also pointed to one of the civil portions of the law, violations of which are punishable by a reprimand or firing and exempt the president and the vice president. The passage bans most federal employees from engaging in political activity while on duty or “in any room or building occupied in the discharge of official duties.”

But the White House press office denied any Hatch Act violation. It argued that because the White House posted the videos on the YouTube channel where it routinely puts up videos of events, the Trump campaign was free to use that non-copyrighted, publicly available content for political purposes later that evening.

Mr. Jacobson, however, called that a loophole, arguing that the explanation fell short if the intended purpose of staging and filming the events on Tuesday was to create material the convention could use.

“It doesn’t matter if you post it first — it’s your intent that matters,” he said, adding that the events on display at the Republican convention were “a combination of exploiting a loophole in the fact that the president is not covered, but brazen lawbreaking by his subordinates — in particular, Chad Wolf, which was an obvious and open violation.”

Asked about the nature of any communications with the campaign about the videos, the White House said there had been no coordination.

Mr. Turley expressed skepticism at the notion that the timing was a coincidence, saying that “the suggestion this just happened to occur during the convention is implausible.” The White House last posted a video of Mr. Trump overseeing a naturalization ceremony in early 2019.

Any criminal investigation or charges would be subject to the control of the Justice Department; Attorney General William P. Barr has expressed a particularly dim view of bringing criminal charges for offenses committed in a political setting.

Civil provisions of the Hatch Act are instead investigated by an agency called the Office of Special Counsel, led by Henry J. Kerner, a former congressional investigator. But while it can seek disciplinary action like a reprimand or firing before the Merit Systems Protection Board for cases involving civil servants, it presents findings of violations about political appointees to the president.

Mr. Trump has made it clear that he does not care about the office’s findings of Hatch Act violations. When Mr. Kerner accused the president’s longtime adviser Kellyanne Conway last year of a pattern of “persistent, notorious and deliberate Hatch Act violations” and called for her to be fired, Mr. Trump ignored the recommendation.

Mr. Turley cautioned that “as raw as this appears to most of us,” in the unlikely case that charges were ever brought, the judiciary would most likely be wary of trying to parse the inherent ambiguities and blurring of the lines between official and political activities by any White House in an election year.

For that reason, Mr. Turley added, Mr. Pompeo’s speech — which made him the first sitting secretary of state in modern history to participate in a party convention — raised a clearer set of problems, because there is no argument it had an official purpose and because it raised not just Hatch Act issues but also questions about whether it violated a stricter set of State Department rules.

The House Foreign Affairs Committee’s oversight and investigations panel on Tuesday announced an oversight inquiry into Mr. Pompeo’s speech. On Wednesday, Representative Veronica Escobar, Democrat of Texas, said on Twitter that she had asked the Office of Special Counsel to open an inquiry into both Mr. Wolf’s and Mr. Pompeo’s “clear and flagrant violations of the Hatch Act.”

But whether any official findings of Hatch Act violations would make a difference in the present political environment is another matter, Ms. Clark said.

“With regard to high-level officials, certainly with regard to Senate-confirmed officials, enforcement would depend on officials being shameable,” she said. “Do they have the capacity to be shamed for misconduct?”