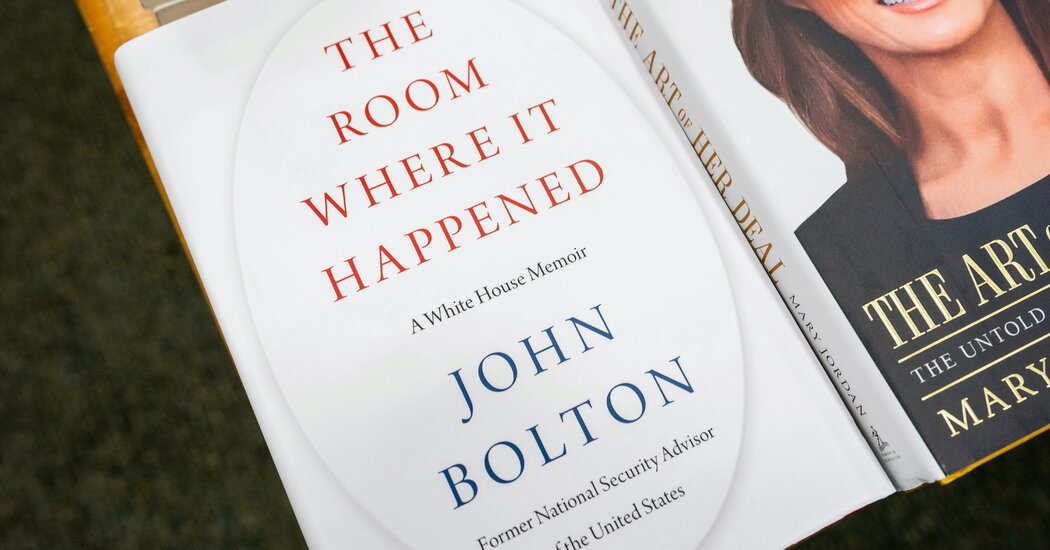 WASHINGTON — White House aides improperly intervened to falsely assert that a manuscript by the former national security adviser John R. Bolton contained classified information in an attempt to prevent its contents from becoming public, a lawyer for the career official overseeing the book’s prepublication review said in a letter filed in court on Wednesday.

At one point, the aides halted a request from Mr. Bolton to review his account of President Trump’s dealings with Ukraine so he could release that section of the memoir during the impeachment trial, according to the lengthy account of the White House review written by Kenneth L. Wainstein, a lawyer for the official, Ellen Knight.

Mr. Wainstein said that his client had determined in April that Mr. Bolton’s book, “The Room Where It Happened,” no longer contained any classified information, but the “apolitical process” was then “commandeered by political appointees for a seemingly political purpose” to go after Mr. Trump’s former aide and that the actions she was asked to take were “unprecedented in her experience.”

“She had never previously been asked to take the above-described measures, and she has never heard that predecessors in her position ever received such instructions in the course of their prepublication reviews,” the letter said.

The filing was an extraordinary twist in the legal saga surrounding Mr. Bolton’s book. The Trump administration sought to block Mr. Bolton from publishing the manuscript after the book was already published and has opened a criminal investigation into whether he unlawfully disclosed classified information.

But the letter called into question the premise of those efforts — that the book contains any classified information. Mr. Wainstein recounted a series of irregularities that he said were unlike any other prepublication review Ms. Knight had handled in her two years working at the National Security Council.

Political appointees in the White House directed her not to communicate with them in writing about the book, and proceeded to have a politically appointed lawyer — Michael Ellis, a former aide to Representative Devin Nunes, a close Trump ally and California Republican — conduct his own review of the book.

Mr. Ellis had no training in prepublication reviews at the time — he underwent it after he completed his review — and pronounced the book replete with still-classified information, a position the Justice Department then made in court seeking to block Mr. Bolton from distributing the book.

But Mr. Ellis was wrong, Mr. Wainstein wrote. Rather than evaluating the book by prepublication review standards for writings by a private citizen, he essentially treated the manuscript as a government document being subject to a classification review.

But the two are very different, the letter explained, on matters like discussing a phone call between a president and a foreign leader. Mr. Bolton’s book contains numerous accounts of such discussions between Mr. Trump and his counterparts.

This is a breaking news story. Check back for updates.