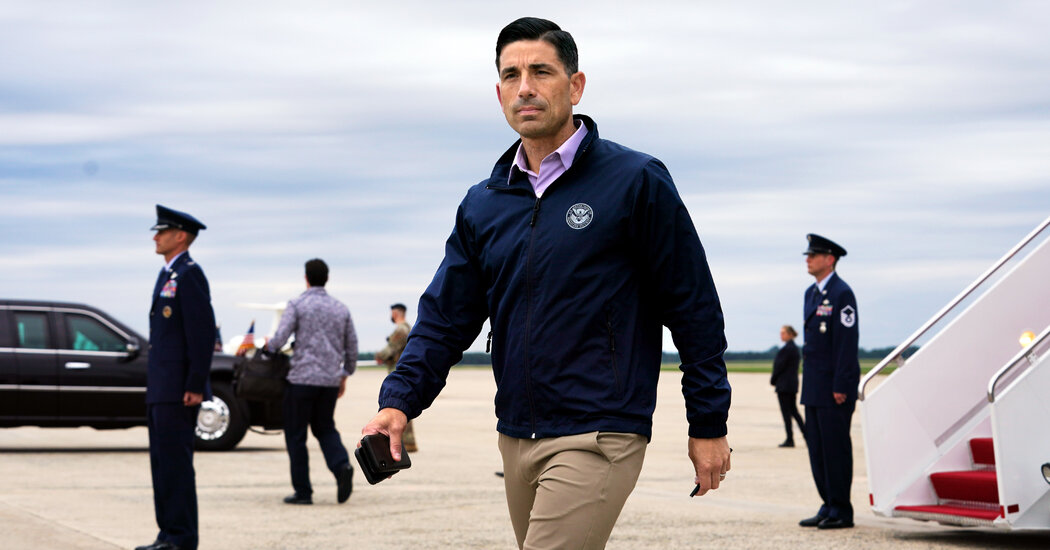 WASHINGTON — Top officials with the Department of Homeland Security directed agency analysts to downplay the threat of violent white supremacy and of Russian election interference, according to a whistle-blower complaint filed by a top intelligence official with the department.

Brian Murphy, the former head of the intelligence branch of the Homeland Security Department, said in a whistle-blower complaint filed on Tuesday that he was directed by Chad F. Wolf, the acting secretary of the department, to stop producing assessments on Russian interference. The department’s second highest ranked official, Kenneth T. Cuccinelli II, also ordered him to modify intelligence assessments to make the threat of white supremacy “appear less severe” and include information on violent “left-wing” groups, according to the complaint, which was released Wednesday by the House Intelligence Committee.

In so doing, the two top officials at the department — both appointees of President Trump — appeared to shape the agency’s views around Mr. Trump’s rhetoric and interests.

Mr. Murphy, who was removed from his post in August after his office compiled intelligence reports on protesters and journalists in Portland, Ore., asserted in the complaint that he was retaliated against for raising concerns to superiors and cooperating with the department’s inspector general. He asked the inspector general to investigate.

“The protected disclosures that prompted the retaliatory personnel actions at issue primarily focused on the compilation of intelligence reports and threat assessments that conflicted with policy objectives set forth by the White House and senior Department of Homeland Security” officials, Mr. Murphy’s lawyers wrote in the 24-page complaint.

The department has stalled in releasing an implementation plan on combating white supremacy and other forms of domestic terrorism for nearly a year. Hours before the release of the complaint, Mr. Wolf highlighted the threat of “white supremacists extremists or anarchists extremists” in an annual address summarizing the work of the department. He said the department would release a blueprint to combat the threats this week, although it was not clear if it would be made public.

House Intelligence Committee Democrats said on Wednesday that the complaint detailed violations of law and abuses of authority that put “our nation and its security at grave risk.”

“We will get to the bottom of this, expose any and all misconduct or corruption to the American people, and put a stop to the politicization of intelligence,” said Representative Adam B. Schiff of California, the committee’s chairman, in an accompanying statement.

The whistle-blower complaint comes almost exactly a year after Mr. Schiff’s panel publicized the existence of another intelligence-related complaint about Mr. Trump’s efforts to pressure Ukraine to investigate his political rival, Joseph R. Biden Jr., a document that ultimately led to the president’s impeachment by the House. Mark S. Zaid and Andrew P. Bakaj, the Washington lawyers who represented the Ukraine whistle-blower, whose identity remained anonymous throughout the impeachment saga, are now working for Mr. Murphy.

Mr. Schiff said in his letter that he had asked the national security official to sit for a deposition on Sept. 21, and a public hearing could follow. But this time, with fewer than eight weeks until Election Day, the House is likely to have little meaningful recourse beyond publicizing Mr. Murphy’s claims.

CNN first reported the existence of the complaint and the details about its contents.

In a statement, Mr. Zaid said that they had informed the executive and legislative branches of his claims and would cooperate with congressional oversight requests.