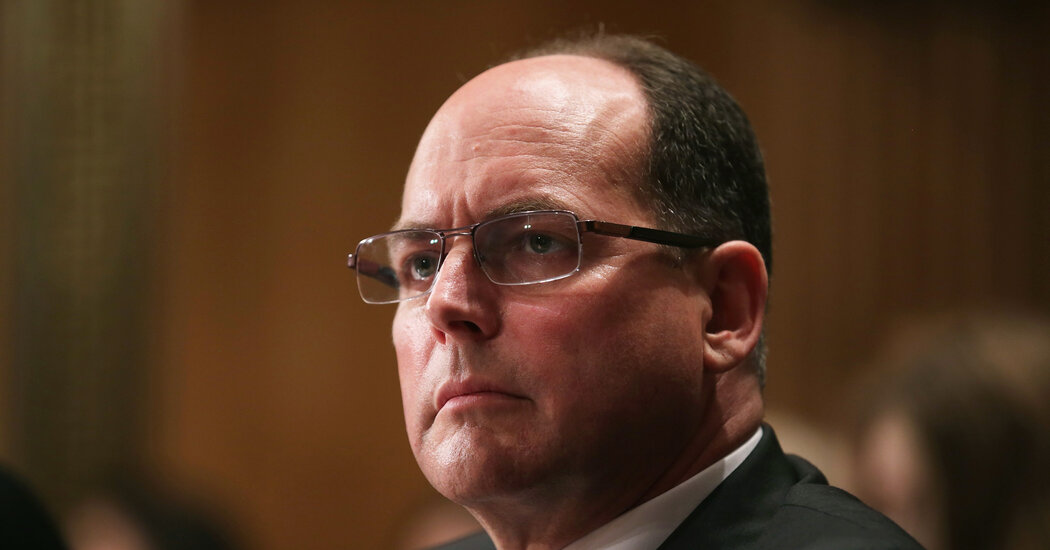 The lawyers who represented the C.I.A. whistle-blower whose complaints led to the first impeachment of President Donald J. Trump are pushing leaders of the select committee investigating the Jan. 6 Capitol riot to remove the panel’s top staff official over allegations that he once retaliated against a whistle-blower.

At least two outside groups, the Project on Government Oversight and Whistleblower Aid, have also called for the removal of David B. Buckley as the special committee’s staff director, arguing that keeping him on would send a troubling message to future whistle-blowers. Both have cited an inspector general report issued in 2019 that found that Mr. Buckley retaliated against Andrew Bakaj, the former lead counsel for the C.I.A. whistle-blower, when the two men worked in the C.I.A.’s inspector general office.

“Putting Buckley in this position is an outright affront to every lawful whistle-blower that exists,” said Mark S. Zaid, who is representing Mr. Bakaj and also helped represent the C.I.A. whistle-blower in the Ukraine matter that formed the basis for Mr. Trump’s impeachment. “I am aghast.”

Mr. Zaid also represents some of the Capitol Police officers who testified before the committee during its first hearing last week. The panel’s chairman, Representative Bennie G. Thompson, Democrat of Mississippi, has said he will soon issue subpoenas in the inquiry.

Democrats on the panel have declined to remove Mr. Buckley, defending his record and denying that he ever retaliated against a whistle-blower.

“He understands as well as anyone the importance of whistle-blowers in providing information to keep us safe and to keep our government accountable,” Tim Mulvey, the committee’s spokesman, said of Mr. Buckley.

Mr. Bakaj began working for Mr. Buckley in 2012 in the C.I.A.’s inspector general office, where he was assigned to create a whistle-blower protection program. In 2014, colleagues of Mr. Bakaj brought him allegations that other C.I.A. officers were manipulating evidence in a sealed case that had been referred to federal prosecutors, claims that agency officials brought to the inspector general’s office. When Mr. Buckley’s office did not act on the complaints, Mr. Bakaj brought the witnesses to the inspector general for the intelligence community, which under law also has jurisdiction to investigate allegations of wrongdoing at the C.I.A.

The intelligence community inspector general’s investigation ultimately found there was merit in the allegations Mr. Bakaj had flagged, and a federal judge vacated a guilty plea in the federal prosecution in question. But the C.I.A. opened an investigation of Mr. Bakaj, and then Mr. Buckley suspended his security clearance and placed him on administrative leave, contending that he had wrongly shared information with the intelligence community inspector general, according to a government report on the events.

Mr. Bakaj complained that he had been the victim of retaliation. The Department of Homeland Security’s inspector general was assigned to investigate the matter and agreed, concluding in 2019 that the evidence Mr. Buckley used to open the investigation of Mr. Bakaj was weak and that he had retaliated against him.

Yahoo News earlier reported the findings of the Department of Homeland Security investigation, and the concerns about Mr. Buckley’s work with the Jan. 6 panel.

Charles McCullough, the former intelligence community inspector general who is now a law partner of Mr. Bakaj, said it was disappointing to read the Department of Homeland Security report and learn Mr. Buckley had tried to block people from sharing information with his office.

“That is certainly contrary to any of the most basic inspector general precepts and to the law that established my office,” he said.

Mr. McCullough said he was not sure that the Jan. 6 committee had “properly processed” the seriousness of what the report had found about Mr. Buckley’s actions.

By the time the report was finished, Mr. Buckley had left government service, limiting what steps the inspector general could recommend. But the report recommended that the C.I.A. review, and consider revoking, the security clearances of Mr. Buckley and four other former officials. It is unclear whether the agency took any action. The C.I.A. declined to comment.

Defenders of Mr. Buckley said he had acted to preserve an important and sensitive C.I.A. investigation.

“Mr. Buckley did his job to protect the integrity of that effort, and since these events unfolded, a federal court has ruled that the precise sort of action he took does not constitute retaliation,” Mr. Mulvey said.

Democrats who defend Mr. Buckley cite a legal ruling last year that found that an investigation into a whistle-blower, by itself, does not constitute retaliation.

But critics argue that if an investigation results in an adverse personnel action, as it did for Mr. Bakaj, it could be.

“If the inspector general system means anything, the Department of Homeland Security inspector general’s findings need to have consequences, and that means Buckley needs to be removed,” Mr. Zaid said. “Otherwise, the entire system collapses.”