While Millions Lost Jobs, Some Executives Made Millions in Company Stock

Even as millions of people have lost their jobs during the pandemic, the soaring stock market since the spring has delivered outsize gains to the wealthiest Americans. And few among the superrich have done as well as corporate executives who received stock awards this year. 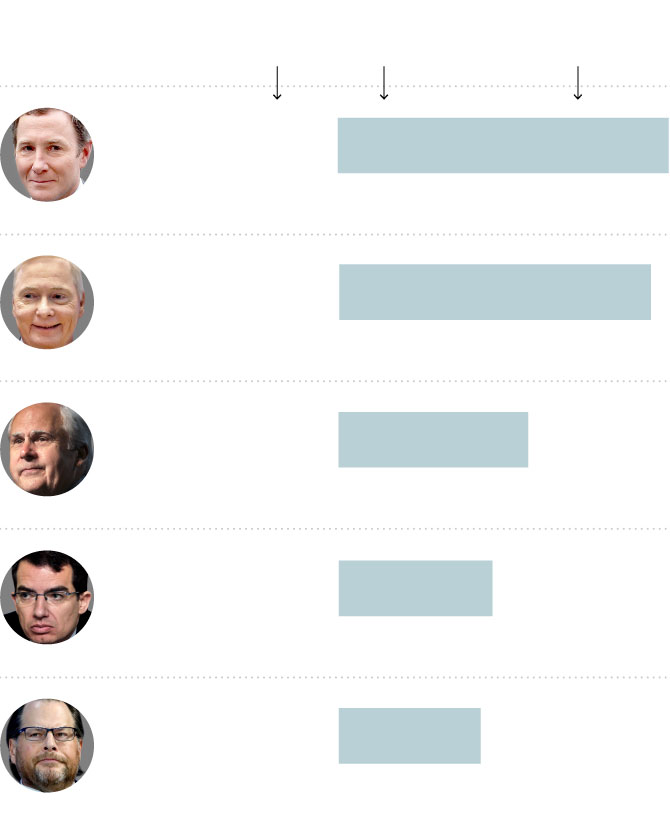 Total value of all stock options 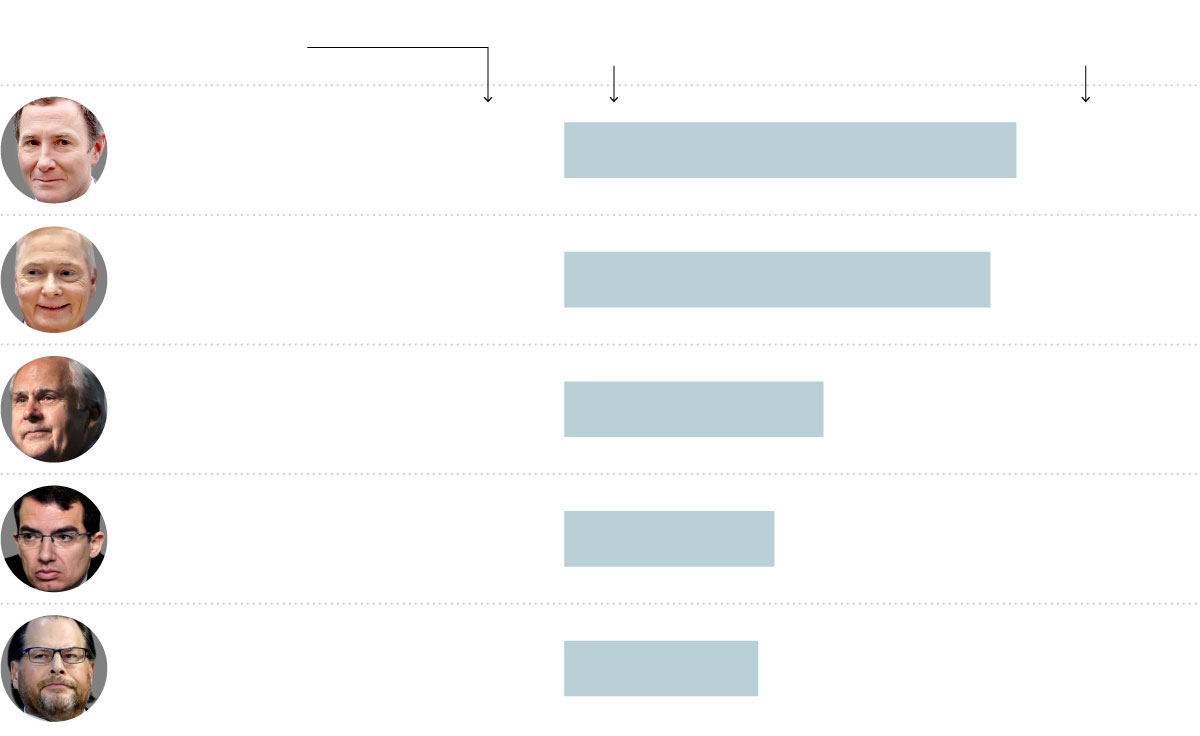 Total value of all stock options

Edward W. Stack, the chief executive of Dick’s Sporting Goods, and William Lynch, president of Peloton, for example, are each sitting on paper gains of over $60 million on stock-based awards they mostly received in the first three months of the year, based on Wednesday’s closing stock prices, according to an analysis by Institutional Shareholder Services, which advises investors on how to vote on corporate matters.

And Stéphane Bancel, the chief executive of Moderna, a drug maker developing a coronavirus vaccine, received options in January that have appreciated by nearly $30 million.

The pay gains are a result of the sharp rise in the stock prices of these companies, which investors are betting are well positioned to grow during the pandemic. Another reason these stock awards have appreciated so much is that some of the grants were made when the stock market was close to its lowest point for the year. Of course, many executives are also sitting on gains on stock they got in earlier years.

But the surge in wealth also highlights how the compensation of senior executives is designed to give them enormous windfalls, which they have gotten even during one of the sharpest economic downturns in decades.

These gains are also a reminder that income and wealth in the U.S. economy are tilted heavily toward a tiny number of top earners who own significant amounts of stock. Most Americans own little or no stock, according to a recent Federal Reserve report, and many had less in savings in 2019 than they did before the last recession a decade ago.

“The stock market is not an indicator of the health of the economy for working people; it’s an indicator of economic inequality,” said Brandon Rees, deputy director of corporations and capital markets at the A.F.L.-C.I.O. “These C.E.O. payments reflect that reality.”

For decades, corporate boards have tried to tie executive pay to the performance of the company’s stock in an effort to make managers more accountable to shareholders. Yet executives still often end up doing far better than might be justified by a company’s fundamental business performance.

Mr. Stack’s compensation shows how top executives can rack up such large gains so quickly.

In March, when the stock market was close to its low point and the share price for Dick’s Sporting Goods was also at a nadir, he received 355 percent more stock options for his 2020 award than for his 2019 grant and 142 percent more restricted shares, according to the ISS analysis and the company’s securities filings. (Businesses often hand executives stock in two forms: stock options or restricted shares. An option usually provides its owner the right to acquire company stock at a future date at the price it was trading on the day it was issued. A restricted share is stock that executives cannot sell for months or years.)

When asked to explain how the company arrived at Mr. Stack’s 2020 stock grants, it said in a statement: “As in prior years, the compensation committee considered a number of factors, including the company’s 2019 performance.”

Then, everything started to move in Mr. Stack’s favor. Investors, believing that Dick’s could profit in the pandemic economy and encouraged by stimulus from Congress and the Federal Reserve, bid up the price of the company’s stock. But because Mr. Stack had far more shares in the 2020 stock grants than he did in 2019, the overall value of those awards have ballooned. The 2020 awards were worth about $7 million when they were issued and are now valued at a combined $67.4 million. By contrast, Mr. Stack’s 2019 awards are worth $15 million at Wednesday’s stock price.

Of course, the gains could shrink if Dick’s stock declines. Mr. Stack can exercise and sell all his stock options only after four years. In a filing, the company said his restricted stock awards would become available over time but did not specify the period.

Still, the award raises questions. Shareholders may object to an arrangement that could give Mr. Stack compensation far in excess of what they might have expected when the stock grant was made.

“If you don’t adjust your approach when there is a shake-up in the market and your stock price is down significantly, investors are going to raise concerns,” said Brett Miller, head of data solutions for the responsible-investment arm of ISS. “What you don’t do is give executives more opportunities to increase their value.”

Employees may also feel left out. As Mr. Stack’s stock grant was swelling in value, Dick’s furloughed many of its employees for several weeks. In the company’s last fiscal year, his compensation was 1,487 times the pay of the company’s median employee, a measurement that includes many part-time workers. Mr. Stack has a large stake in Dick’s and controls the company through powerful voting shares.

The ISS analysis covers top executives whose pay details are included in companies’ proxies, documents that publicly traded businesses file with the Securities and Exchange Commission annually. Proxies provide investors with important financial information and instructions on how to vote on corporate proposals and board appointments.

Not all executives have gains on their 2020 grants, because many companies have struggled in the pandemic. In its survey, which covers 2020 grants made by companies in the Russell 3000 stock index, ISS found that 1,675 “named executive officers,” or the executives who appear in proxies, had gains while 1,388 had losses, as of Wednesday’s closing stock prices. The average appreciation was nearly $1.5 million and the average loss $827,000.

The chief executives of technology companies, many of which have thrived during the pandemic, have done particularly well. Their average gain on 2020 grants was $3.2 million, while the average loss was $543,000.

The largest combined gain in the survey was Mr. Lynch’s $64 million on his 2020 options grants from Peloton. Its stock is up 500 percent from its 2020 low.

If a company’s stock soars like Peloton’s, employee stock awards will most likely produce immediate paper fortunes. But Mr. Miller said companies could structure stock awards to reduce that likelihood if they wanted to. For example, companies can space out grants so they are not all granted when the stock is at a low or a high point.

Ray Jordan, a spokesman for Moderna, said Mr. Bancel’s options vested over several years, meaning that “paper gains in a few months do not necessarily translate to long-term gains if the stock performance is not maintained.”

Some executives at companies that have been hit hard by the pandemic have still done well. In March, William J. Hornbuckle, chief executive of MGM Resorts International, gave up the remainder of his 2020 salary in exchange for restricted stock units worth $700,000, the amount of his forgone salary. After MGM stock recovered somewhat from the lows it plumbed in March, that grant is worth $1.3 million on paper — and all his 2020 awards have appreciated by a combined $4 million.

“At a time of great uncertainty when all of our properties were closed with no clear plan for reopening, Mr. Hornbuckle and several of our executives volunteered to help the company conserve cash by exchanging all or a portion of their cash compensation for the remainder of 2020 for restricted stock units that vest at the end of the year,” Debra DeShong, an MGM representative, said in a statement. “By doing so, they took on great risk, risk that still exists in that we are not operating under normal circumstances and we are still in a period of recovery.”