Where Are Genitals Represented in the Brain? 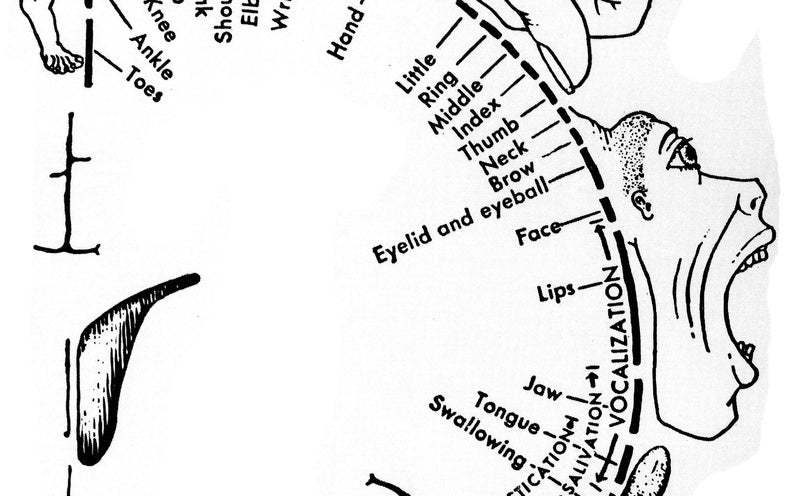 Paracelsus, the German-Swiss physician and alchemist, asserted in the sixteenth century that he knew how to create a “little man”—or homunculus—by placing human semen in a sealed vessel packed with horse manure that was then nurtured with blood to gestate. The recipe was no more useful than the ones for turning base metals into gold, but the term has survived through the centuries, making its way into literature (Faust), television (Doctor Who) and even video games (Castlevania: Dawn of Sorrow). Despite the stiff competition from popular culture, neuroscience textbooks have succeeded better than any other medium in defining the contemporary meaning of homunculus.

In 1950 neurosurgeon Wilder Penfield and a colleague published a depiction of a homunculus that wrapped around the somatosensory cortex and illustrated where the brain processed touch for specific body parts. The position of the head, shoulders, knees and toes in the cortex were laid out somatotopically, meaning they were presented in the same order in the brain as they appear on the body. Neurons for the face were positioned at the very outside edge of the postcentral gyrus—the ridge at the top of the brain where touch information is processed that runs from ear to ear like a set of headphones. The feet, meanwhile, were located at the midline, where the two hemispheres of the brain meet. (Sensory information from the left side of the body is processed in the right hemisphere, and vice versa.) The only exception in all this was the penis, which was buried underneath the toes, tucked on the inside wall of the gyrus. In terms of sex, the homunculus in this first rendition of a neural touch map was truly a “little man” because it ignored the physiological constituents for what can be labeled a “hermunculus.”

The map’s placement of the male genitals, shown as being literally underfoot, has puzzled neuroscientists for decade., And with the advent of neuroimaging technology, several labs have used electroencephalography (EEG) and functional magnetic resonance imaging (fMRI) to try to confirm—or refute—Penfield’s map. But, somewhat amazingly, scientists are still without a firm answer as to how to draw a homunculus with the correct placement of male and female genitalia. Some relatively recent studies find the genitals in the same location Penfield did. Others pinpoint a different region, located higher up on the somatosensory cortex—a patch of cells that more appropriately lies between the areas designated for the hips and the knees.

“The Penfield location is a bit mysterious because it’s a break in the continuum of the somatotopy of the body,” says John-Dylan Haynes, director of the Berlin Center for Advanced Neuroimaging. “It’s like a biological basic principle, and that is the exception. You look at the Penfield maps, and the penile representation is in the wrong place. Why is it there?”

The homunculus that we know today was developed based on electrical stimulation of different parts of the cortex in more than 400 people undergoing brain surgery for epilepsy or to remove a tumor. During surgery, for which people received just a local anesthetic, Penfield asked patients to describe the sensations they felt in their body in response to electrodes stimulating different parts of the brain. Based on these reports, Penfield employed medical artist Hortense Cantlie to draw a map of the somatosensory cortex with its corresponding body parts.

In contrast to Penfield’s thoroughness with the rest of the body, only three patients described genital sensation with neural stimulation. In an article published in Brain in 1937 that first described the work that led to the development and refinement of the homunculus. Penfield wrote that the lack of responses from other patients may have been because of “a false sense of modesty.”

Penfield also acknowledged that finding the penis underneath the foot in the somatosensory cortex was unusual, writing, “Presumably rectum and genitalia should be placed above feet…, but our evidence is not sufficient for conclusion and they seem to be somewhat posterior to feet.”

Despite this mystery, Penfield’s map of the somatosensory cortex was quickly adopted as the standard, so the genitals remained underneath the feet for decades. Studies conducted in the 1990s using EEG and the imaging technique magnetoencephalography (MEG) largely confirmed the positioning of the classic homunculus, placing the genitals on the inside wall of the postcentral gyrus. This time, the scientists worked in the opposite direction, stimulating parts of the body to see what region of the brain lit up. The spatial resolution of the two encephalography technologies is notoriously imprecise, however, because the recordings are made through the scalp.

“EEG and MEG are not techniques that will tell you, ‘Is it two centimeters higher or lower?’” Haynes says. “Ultimately we’re talking about a few centimeters here, so they don’t give you the spatial resolution.”

It wasn’t until 2005 that a study challenged Penfield’s placement of the penis. Using fMRI to conduct the neuroimaging and a toothbrush to stimulate the penis, big toe and abdomen, the researchers found penile activity positioned in the cortex below the torso and above the foot. Since then, the handful of other fMRI studies that have been conducted have largely confirmed the new location.

Notably absent from this conversation were distinguishing features of female anatomy. Penfield’s original homunculus did not include the vulva or breasts, and out of the more than 400 people involved, only nine of them were women.

“Penfield really didn’t study very many women, and so the assumption has always been that what is the case for men will be the case for women,” says Gillian Einstein, a psychology professor at the University of Toronto, who coined the term hermunculus. “We really need to understand the somatosensory cortex of women in addition to all the men.”

It wasn’t until 1983 that scientists thought to look at vulval stimulation in the brain to see if it differed from the penis. Like the EEG studies in men, the genitals were estimated to be on the inside wall of the somatosensory cortex, underneath the feet. The first study using fMRI, however, found the region higher up, closer to the hips. The most recent paper, published earlier this year by Haynes and his colleagues in the Journal of Neuroscience, located the clitoris in the same area.

Thanks to this type of higher-resolution imaging technology, a consensus has started to form in the past decade that the male and female genitals are, in fact, located in the same relative area in the brain as they are in the body—between the torso and legs.

One dissent, though, comes from the work of psychologist Barry Komisaruk’s lab at Rutgers University. In studies of women and of men—published in 2011 and 2020, respectively—Komisaruk saw activation both above and below the foot in the somatosensory cortex. His theory holds that the higher up region represents the general area of the groin, while the genitals are tucked lower down. He thinks that the lack of specificity in the other studies is because of their use of either electric or vibratory stimulation of the genitals that could activate other sensory nerves in the area.

“I think the basis for the debate is not making a clear distinction between the stimulation that’s applied and how specific it is to the genitals, as opposed to the rest of the pubic area,” Komisaruk says. “Because the pubic area does indeed have a very different distribution on the surface of the cortex.”

On the other side of the debate, Haynes says that the activation Komisaruk sees on the inside wall of the cortex is actually from the supplementary motor area (SMA), which is involved in planning movement. Participants in Komisaruk’s two studies touched themselves instead of having a partner or automated device stimulate the region, as in the other research.

“I think the reason they see this … activity is simply: it’s an artifact of people planning to move, planning their movements for the self-stimulation,” Haynes says. “It’s in exactly the spot where the SMA is.”

Why do scientists care whether the genitals are located a few centimeters up or down? The answer is that the information could potentially be used therapeutically. In his latest paper, Haynes revealed that the thickness of the relevant area of the cortex correlated with how often the women in the study had sex in the past year, suggesting that neuroplasticity, a reorganization of neural connections, may occur in the area in response to experience. It is possible that harnessing that plasticity could be helpful in the healing of abused women. In future work, Haynes plans to investigate whether the representation of the vulva in the somatosensory cortex differs in women who have experienced sexual trauma.

To obtain that needed level of specificity, instead of assuming where the vulva is generally located in the cortex, researchers need to map each woman’s brain individually because the precise location varies from person to person. That important detail, Einstein says, could explain the divergence between studies. “There are huge individual differences, depending on experience and exposure to different types of stimuli,” she says. “I wouldn’t rule out a slightly different region of localization in the brain for different people. I think the more people we study, the more variation we’re going to find.”

In other words, Penfield’s original map may have been accurate for the three men he looked at who reported genital sensation. Or his methods might have led him down the wrong path. Recent studies using fMRI, MEG and even cortical electrostimulation (like Penfield’s work) found variations in the somatosensory representations of other body parts, including the head and legs.

The key to finally pinning down the location of the genitals, as with everything in science, will be large sample sizes and repeated experiments with consistent methods. In the past 40 years, 17 studies using several different imaging and stimulation techniques have mapped the genitals of 264 people—an average of just 15 people per study.  Small wonder that they disagree. To settle the debate once and for all, researchers need to conduct a large, comprehensive investigation of people of different ages, sexes and sexual experiences that will compare activation in response to genital self-stimulation and stimulation by another person or device. Until that happens, the textbook homunculus—and the missing details for a hermunculus—will likely remain unchanged.