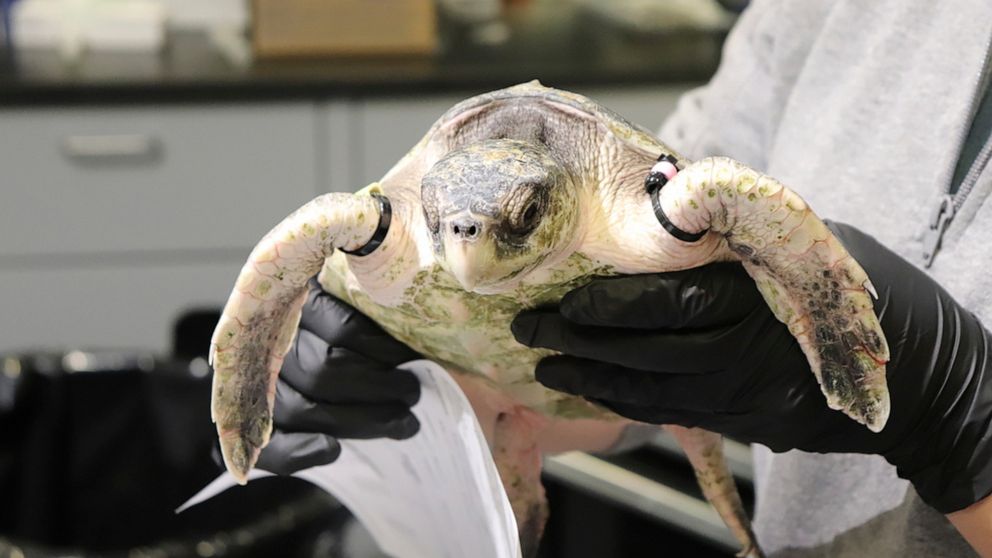 GULFPORT, Miss. — Forty endangered sea turtles that were injured when the water off Massachusetts cooled down so quickly that they couldn’t swim away are being nursed back to health at the Mississippi Aquarium, flown there by a volunteer pilot group known as Turtles Fly Too.

All are Kemp’s ridleys, the world’s smallest sea turtles and the most endangered of the six species found in U.S. waters, the aquarium said in a news release Monday.

“All 40 of the Kemp’s ridleys are pretty small,” as little as 2.2 pounds (1 kilogram), said Alexa Delaune, the aquarium’s vice president of veterinary services. Most showed signs of pneumonia and would be treated with antibiotics, she said.

Sea turtles can become lethargic when stunned by water that chills down around them before they can swim to warmer waters. The cold alone can kill them. It can also lead to pneumonia, shock and frostbite.

Some experts believe climate change is increasing the number of turtles afflicted off Cape Cod each winter.

This group of turtles was flown to Gulfport on Friday after the New England Aquarium in Massachusetts ran out of room and appealed for help, Mississippi Aquarium spokesman Jeff Clark said.

The aquarium was already caring for two turtles rescued last year in Massachusetts, one with a severe lung infection and the other with a shoulder infection that restricts movement. The Boston aquarium had asked the Gulfport aquarium to take them to make room for this year’s injured, officials said in November.

Last year, 75 turtles that stranded in Massachusetts were treated in Gulfport and New Orleans. Thirty were sent to the Audubon Species Survival Center in New Orleans, 25 to the Mississippi Aquarium and 20 to the Institute for Marine Mammal Studies in Gulfport.

The Audubon center isn’t treating any sea turtles from this winter’s strandings but is ready to do so if needed, spokeswoman Annie Kinler Matherne said.

Why the Tonga Eruption Was So Violent, and What to Expect Next