What to Save? Climate Change Forces Brutal Choices at National Parks. 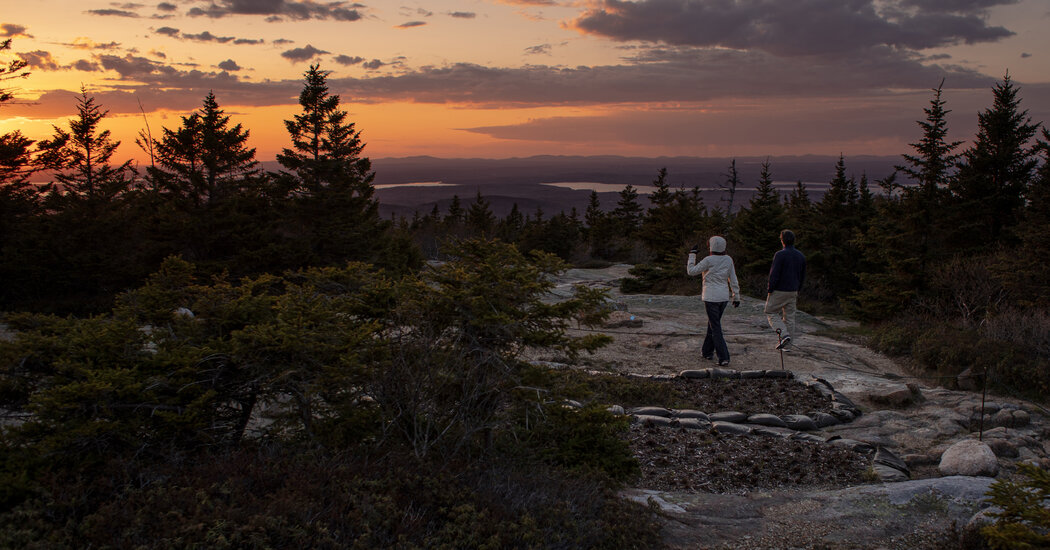 For more than a century, the core mission of the National Park Service has been preserving the natural heritage of the United States. But now, as the planet warms, transforming ecosystems, the agency is conceding that its traditional goal of absolute conservation is no longer viable in many cases.

Late last month the service published an 80-page document that lays out new guidance for park managers in the era of climate change. The document, along with two peer-reviewed papers, is essentially a tool kit for the new world. It aims to help park ecologists and managers confront the fact that, increasingly, they must now actively choose what to save, what to shepherd through radical environmental transformation and what will vanish forever.

“The concept of things going back to some historical fixed condition is really just no longer tenable,” said Patty Glick, a senior scientist for climate adaptation at the National Wildlife Federation and one of the lead authors of the document.

The new research and guidance — which focus on how to plan for worst-case scenarios, decide what species and landscapes to prioritize, and how to assess the risk of relocating those that can’t survive otherwise — represent a kind of “reckoning” for the Park Service, Ms. Glick said.

For a profession long tied to maintaining historical precedents, the change is brutal, said Gregor W. Schuurman, a scientist with the climate change response program at the Park Service who helped to write the new guidance.

“It’s bargaining. Nobody wants to do this. We all got in this game, as the Park Service mission says, to ‘conserve unimpaired,’” Dr. Schuurman said. “But if you can’t do that in the way you thought, you have to see what you can do. There’s often more flexibility there than one imagines.”

The team behind the report kept a low profile during the Trump Administration, when the Park Service was at the center of frequent political battles. In 2018, for example, managers tried to delete humanity’s role in climate change from a report on sea-level rise. The day before President Biden’s inauguration, they began publishing their papers, which were years in the making.

The first one, titled “Resist, Accept, Direct,” aims to help park employees triage species and landscapes. In some cases, that will mean giving up long efforts to save them. The second outlines how to assess risks when relocating species. That may be crucial to saving plants and animals that can no longer survive in their natural habitat.

Those two papers were the basis for the guidance published last month. On the very first page of that document, set over a photo of the charred Santa Monica Mountains after the 2018 Woolsey fire, the authors state that “it will not be possible to safeguard all park resources, processes, assets, and values in their current form or context over the long term.”

Decisions about what to protect are especially imminent for forests, where changes are leading some researchers to wonder if the age of North American woodlands is coming to an end.

In the United States Southwest, for example, research suggests that, in the event of wildfires, up to 30 percent of forestland might never grow back because global warming favors shrubs or grasslands in their ranges. Joshua trees appear likely to lose all of their habitat in their namesake national park by the end of the century.

The new guidelines essentially ask park managers to think beyond resistance to change and begin considering transformation as the prevailing theme to be greeted and managed. In some isolated cases, resisting ecological change might work for a while. In other cases, losses must be accepted. But just as often, there may be room to shepherd changes in a less calamitous direction.

For example, some native tree species in Acadia National Park, Maine, are struggling to survive as temperatures warm. Invasive, brambly shrubs, brought to the United States as ornamental plants, are much better at adapting to the warmer temperatures than native species and are quickly moving in to take their place. The invasives produce leaves earlier in spring than native species, shading out any young tree that tries to emerge. And, as mild weather arrives earlier and earlier (the growing season has already lengthened by two months in coastal Maine over the last century and a half because of global warming), the brambles only get more successful and abundant.

“They’re dense thickets and you can’t walk through them,” said Abraham Miller-Rushing, an ecologist and the science coordinator at Acadia National Park. They’re also a perfect habitat for ticks that can carry Lyme disease.

For the last 30 years, the park has sent out teams of people to cut down and pull out the shrubs. But that won’t work for long. “The models show that of the 10 most common tree species in the park, nine of them are predicted to lose habitat over the next 80 years, either declining a lot or disappearing entirely,” Dr. Miller-Rushing said. That includes red spruce, which make up 40 percent of the trees in the park. If those disappear, much of the forest floor would suddenly open to the invasive shrubs, which would fill the open space faster than any manual effort could stop them.

Right now, park managers are still finding new red spruce saplings around the park, which is a good sign. But things could change very quickly — much sooner than 80 years from now. “That decline could be rapid,” Dr. Miller-Rushing said. Red spruce is very sensitive to drought. “You could imagine a scenario where we get a drought combined with an insect pest or pathogen. That could knock back the spruce really quickly.”

It’s already happened to the red pine. Almost every one of the species in the park has been wiped out over the past 6 years by a single invasive insect, the red pine scale. “That’s likely how a lot of these transitions will happen,” Dr. Miller-Rushing said. “Not slow, but fast.”

Acadia park managers are already using the Resist, Accept, Direct framework to decide what to do. Right now, they are considering selecting certain southerly tree species to hand-plant inside the park, in the hope that they will avoid a forest full of brambles.

Whatever action they take, in the coming decades, the park won’t look like the Acadia of the past. “When our forests change to hardwoods, or, God forbid, invasive shrub land, the postcards would look different then,” Dr. Miller-Rushing said.

“There’s definitely a sense of loss,” he added, but also “a sense of urgency.”

Dr. Miller-Rushing finished his doctorate in conservation biology in 2007. At the time, he said, protected areas like the national parks were still being thought about as static places that could be preserved forever with the right techniques. “We weren’t being trained on how to manage for change,” he said. “We were being trained on how to keep things like they were in the past.”

That means nearly everyone in his line of work was caught unprepared for the current reality. “You have a whole profession of people having to shift how we think,” Dr. Miller-Rushing said.

The changes come at a time when other aspects of America’s traditional approach to conservation, like the forced removal of Indigenous people from the lands they had managed for thousands of years, are also being re-examined. Far from being untouched expanses, it is now understood that those lands were actually shaped by Native American stewardship. Researchers have found evidence, for example, that Native burning practices helped keep the lush oak and pine forests that Europeans colonists encountered along the East Coast healthy and free of undesirable species.

Amid those big shifts, the new framework appears to be gaining acceptance, including outside the Park Service. In April, the United States Fish and Wildlife Service published a new webpage about Resist, Accept, Direct, acknowledging that climate change is fundamentally shifting the ecology inside several of its wildlife refuges. In 2017, Canadian officials got in touch, looking for new approaches to conservation under climate change. Parks Canada has been considering the concept since then. And, in March, Dr. Schuurman was invited to present the framework to officials at South Africa’s park service.

“I think what the Park Service is proposing here is a well thought-out, reasonable response,” said Susan G. Clark, an adjunct professor of wildlife ecology and policy sciences at the Yale School of the Environment who was not involved in producing the new documents. “It does signal the Park Service rethinking its responsibilities, and also what it can and can’t do in the face of all this change.”

For now, he said, climate change is teaching them to abandon the concept of “forever.” It doesn’t apply to the parks they manage today. “Climate change busts that up.”

According to Dr. Miller-Rushing, the former approach might have been flawed from the beginning. The rule of nature, after all, is change. Now, the climate crisis is making that clear.

“We were probably always wrong to think about protected places as static,” he said.