What to Know About the Sacramento Shooting 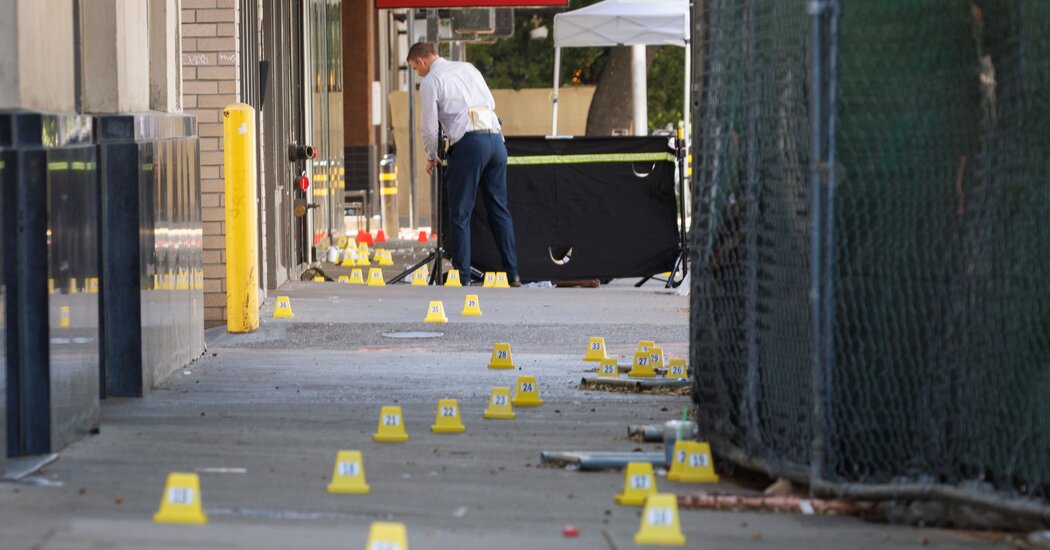 Six people were killed and at least a dozen wounded in downtown Sacramento on Sunday in what the authorities say is the largest mass shooting in the city’s history.

This tragedy comes just about a month after another shooting in the Sacramento area in which a man gunned down his three children outside a church. It’s an explosion of violence that mirrors a nationwide trend.

“What happened last night is the biggest and most recent example of what we all know: Gun violence is truly a crisis in our community — and has increased not only here in Sacramento, but across the nation,” Kathy Lester, the Sacramento chief of police, said at a news briefing Sunday afternoon.

Across the country in 2022, there have been five mass murders — defined as the killing of four or more people, according to the Gun Violence Archive, a nonprofit organization that collects data on shootings. Three of them were in California.

“Sadly, we once again mourn the lives lost and for those injured in yet another horrendous act of gun violence,” Newsom said in a statement on Sunday, adding, “We must resolve to bring an end to this carnage.”

Sunday’s shooting happened shortly after 2 a.m. as people streamed out of clubs closing in downtown Sacramento. Lester said that when officers responded to the scene, they found a large crowd and at least a half-dozen people shot “in a really tragic situation.”

She said that multiple shooters were involved and that the police had recovered at least one firearm, a stolen handgun. Though it was unclear what had led to the violence, the police said they were looking into an altercation that had taken place beforehand. (Officials are asking people to share any videos possibly related to the shooting.)

Officials have not released further details about the victims or their conditions. My colleagues reported that, on Sunday afternoon, the sidewalks outside the clubs were covered in shattered glass and littered with dozens of bullet casings as police officers sifted through what Lester described as a complex crime scene.

“I got a son down there under a blanket,” Fred Harris, 63, a Sacramento resident, told The New York Times. He said he had been awakened in the middle of the night by a phone call from his daughter, who, sobbing, said that his son, Sergio Harris, 38, was among those killed.

Leticia Harris, 35, the wife of Sergio Harris, said that he was a landscaper with three children between the ages of 5 and 11. He had no connection with the shooting, she said, other than to have been caught in the crossfire.

Midwesterners move to Los Angeles. Which house should they choose?

“I moved from San Francisco to Los Angeles in the fall of 2003. Pacific Bell Park (now known as Oracle Park) made its debut as the Giants’ home in 2000. I went to quite a few Giants games from 2000-2003 and enjoyed the beautiful views of the Bay Bridge and Oakland from the upper deck.

One spring afternoon in 2004 I drove up to the top deck ticket office at Dodger Stadium to grab tickets for a Dodgers game. I did not know that the top deck would be open to the public, so after I had tickets in hand I took a peek down to the field. I grew up watching my hometown Houston Astros play many games in LA in the ’70s-’80s as they were division rivals. I always loved the (what I now know as mid-century modern) design of the outfield pavilion and the iconic character of the 56,000-seat venue. However, I did not realize until I saw it in person that there were mountains behind the Stadium which can be viewed from the reserve level and top deck. Dodger Stadium can only be seen from certain vantage points as it is tucked into Chavez Ravine.

The ballpark is now 60 years old (third oldest in the major leagues) and fortunately ownership has continually made improvements to this architectural gem. I’ve been to over 20 MLB ballparks and Dodger Stadium is definitely my favorite of them all, not to mention my happy place in Los Angeles.”

What’s the best part of spring in California? Email me at CAtoday@nytimes.com and your submission may be included in a future newsletter.

This spring, the Yurok tribe in far northern California will reintroduce California condors into the wild.

The large vultures once lived throughout California but were wiped out by the early 20th century.

The tribe plans to release four young condors in Redwood National and State Parks this year, followed by six more per year over the next two decades, Tiana Williams-Claussen, director of the Yurok Tribe’s Wildlife Department, told WBUR.

“It seems almost unreal,” Williams-Claussen said. “What I’m envisioning is that moment when they’re just part of our life again, and I could at any point just look up and see them in the sky.”

Mariel Wamsley and Jonah Candelario contributed to California Today. You can reach the team at CAtoday@nytimes.com.