What to Know About the Orange County Church Shooting 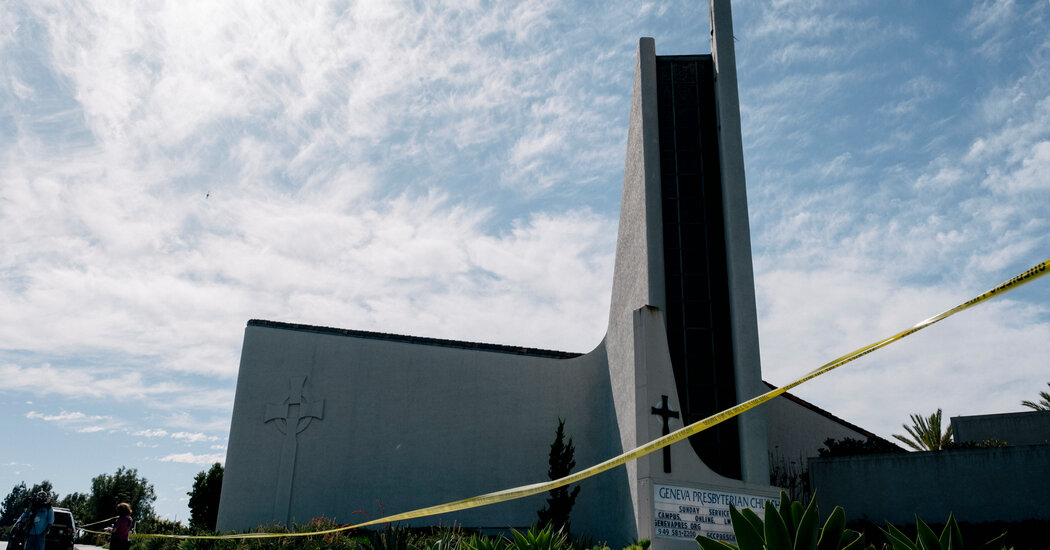 Amid a nationwide explosion in gun violence that shows few signs of easing, a gunman opened fire inside an Orange County church on Sunday and killed one person and critically injured four others.

The attack in the quiet city of Laguna Woods came just one day after the deadliest mass shooting of 2022, a racist massacre in a supermarket in Buffalo that killed 10 people. Also over the weekend, a man was fatally shot outside of Grand Central Market, downtown Los Angeles’s popular food hall, and 17 people were wounded in a shooting in Milwaukee.

Gun deaths in the United States in 2020 reached the highest levels ever recorded, with gun-related homicides jumping 35 percent, my colleagues reported last week.

And in many places, including Los Angeles, those trends have not yet reversed. That has raised concerns about what will happen over the next few months, as homicides typically increase in the summer in the United States.

“June, July, August are always the biggest shooting months,” said Christopher Herrmann, an assistant professor in the department of law and police science at John Jay College of Criminal Justice in New York.

The Laguna Woods shooting took place just before 1:30 p.m. on Sunday, as a largely Taiwanese congregation gathered for a lunch banquet at Geneva Presbyterian Church after a service, law enforcement officials said. Thirty to 40 people were there.

One man died on the scene, four were critically injured and another person sustained minor injuries, said Jeff Hallock, Orange County undersheriff. But there probably would have been far more devastation if churchgoers had not fought back, he said.

Hallock said that before the police arrived, congregants had already subdued the attacker, believed to be an Asian man in his 60s. They tied his legs together with an extension cord and confiscated two handguns from him, he said.

Hallock said it was unclear whether those wounded were those who had stepped in. He said officials were still interviewing the dozens of witnesses. The shooter’s motive also remains unknown, he added.

In a series of text messages on Sunday, the Rev. Albany Lee, who presides over the Irvine Taiwanese Presbyterian Church, which is housed on the campus of the Geneva Presbyterian Church, told The Times that congregants said the gunman “was a new face” and no one recognized him.

Lee added that the person who restrained the gunman was a pastor who led the services on Sunday.

That pastor, who was not injured, had “subdued the shooter before he loaded another round of bullets,” he said. “Thank God,” he added.

Charlotte Hsieh, the organist for the church, told The Times that she left at around noon after services were complete. The church is in a retirement community in a safe neighborhood, she said.

“I could not even imagine something like this could happen here,” she said. “I’m just as shocked as anybody.”

“No one should have to fear going to their place of worship,” the governor said. “Our thoughts are with the victims, community, and all those impacted by this tragic event.”

A comforting breakfast sandwich inspired by a restaurant in Silver Lake.

Needless to say, the trail is quite rocky. It was raining one night and I lost my dog in that park earlier in the day, so we went back to find her after having searched for four hours earlier. We were exhausted and it was raining. We were hiking in the dark to find our dear dog. We were hiking from 9 p.m. to midnight in the rain with headlamps searching for her. It was raining so hard that the rain was making streams out of the trail and you could hear the waterfalls pouring out of the rocks to the left and to the right of us. Because it has few plants, just lots of rocks, the water sounded magnificent. The good news is we found our dog at the head of the trail when we got back and we experienced Rocky Peak Trail in a way that most people don’t. It’s magnificent. You can hike for hours and hours.”

What do you want to know about California’s June primary election? Email us your questions at CAToday@nytimes.com.

The first plants in a “healing garden” were dug into the ground last week at City of Hope’s new oncology center in Irvine.

The plants were chosen because they are either native to California or, in the case of peppermint and lavender, have possible medicinal benefits, reports The Orange County Register. The species were also selected so that something in the garden would always be in bloom.

Patients and families who visit will be able to sit in the shade and “appreciate the beauty, appreciate the quiet,” said Annette Walker, City of Hope Orange County president.

Thanks for starting your week with me. I’ll be back tomorrow. — Soumya

Mariel Wamsley and Jaevon Williams contributed to California Today. You can reach the team at CAtoday@nytimes.com.