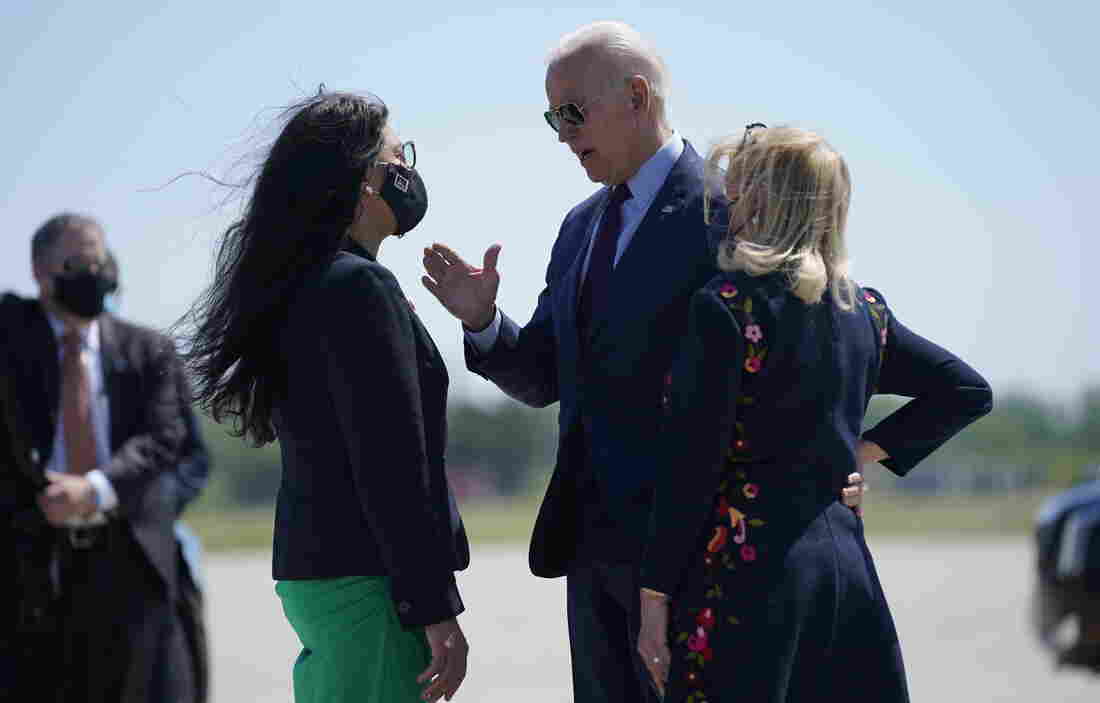 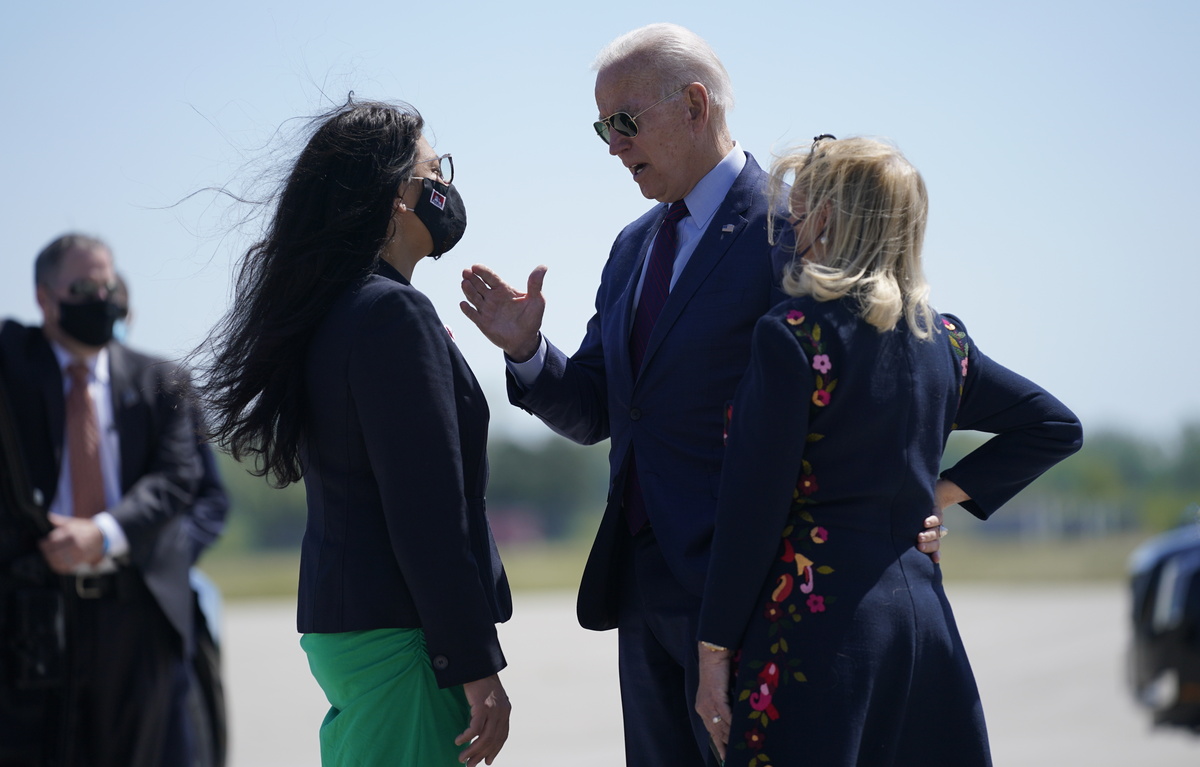 In a notable tarmac conversation, Michigan Rep. Rashida Tlaib conveyed to President Biden her dissatisfaction with the United States’ response to the bloody conflict between Israel and Hamas that has now entered its second week, her office says.

Tlaib, the first woman of Palestinian descent to serve in Congress, also told Biden that Palestinians must be protected, and she shared her harsh assessment of Israel’s role in escalating the violence, an aide for the congresswoman’s office said in a statement.

Their conversation came after Biden landed in Detroit Tuesday, ahead of his visit to Ford’s Rouge Electric Vehicle Center in nearby Dearborn, and as global pressure mounts for Israel and Hamas to call a truce in their fighting.

Dearborn is home to a sizable Arab American population, and protesters took to the streets Tuesday in the city to voice support for Palestinians. 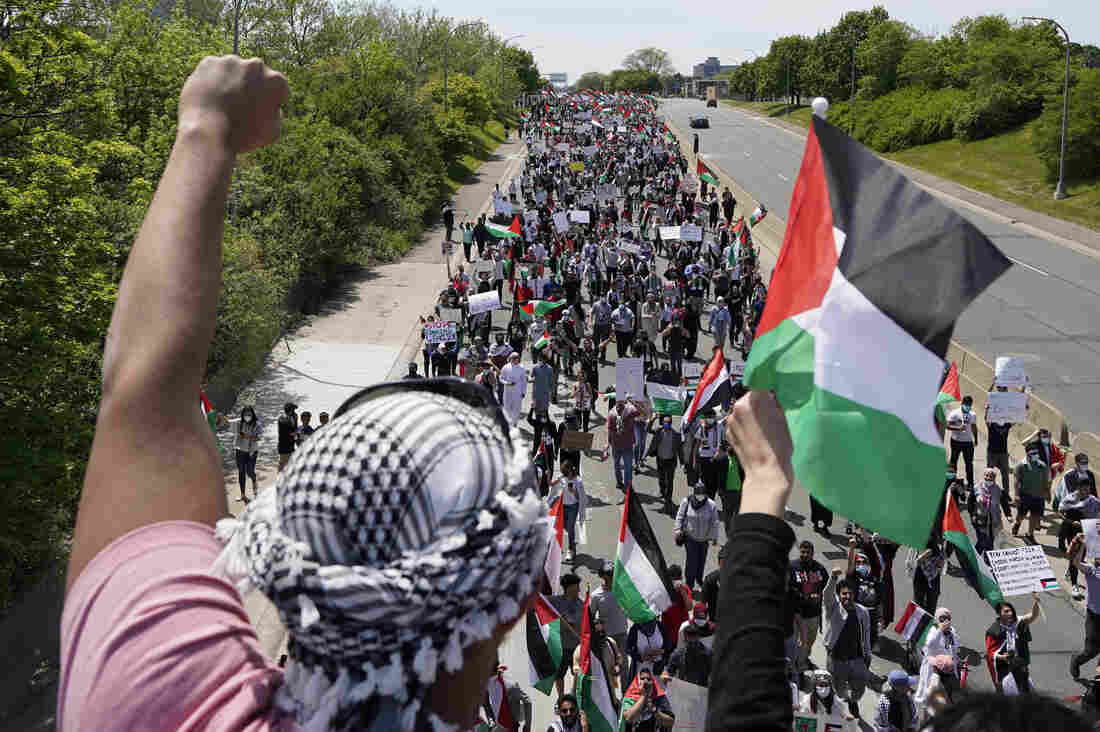 “Palestinian human rights are not a bargaining chip and must be protected, not negotiated,” the aide said Tlaib expressed to Biden. “The U.S. cannot continue to give the right-wing [Israeli Prime Minister Benjamin] Netanyahu government billions each year to commit crimes against Palestinians. Atrocities like bombing schools cannot be tolerated, much less conducted with U.S.-supplied weapons.”

It was reported this week that the United States is conducting an arms sale to Israel worth some $735 million — a deal that caught several Washington lawmakers off guard and prompted calls to halt the sale until a cease-fire is reached.

“Congresswoman Tlaib reiterated that the status quo is enabling more killing, that the current U.S. approach of unconditional support for the Israeli government is not working, and that the White House must do far more to protect Palestinian lives, dignity, and human rights,” the aide said.

Tlaib’s remarks to the president echoed an impassioned speech she delivered on the House floor last week, in which she called to end the “apartheid system” and “racism” she said have been exacted on Palestinians by the Israeli government.

Biden, like his White House predecessors, has expressed support for Israel and its right to defend itself, while encouraging Israel to protect innocent civilians.

In a carefully worded statement, the White House said that when Biden spoke to Netanyahu on Monday, he “expressed his support for a cease-fire and discussed U.S. engagement with Egypt and other partners towards that end.”

The criticism from Tlaib and other progressive Democrats reflects the diversifying views among the party on the longstanding Middle Eastern tensions.

Speaking at the Ford plant after the brief confab with Tlaib, Biden praised the Detroit congresswoman for her attention to human rights.

“You’re a fighter and God thank you for being a fighter,” he said, promising to do everything he could to ensure that Tlaib’s family in the West Bank remained safe.