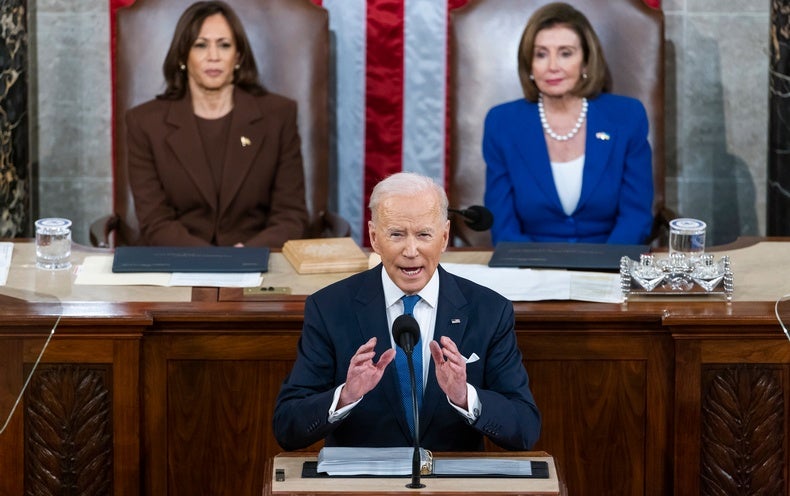 President Biden used his first State of the Union address to reset his administration after a year of inflation and crises at home and abroad that has left him with nearly record-low approval ratings.

But Biden did little to restart his stalled climate agenda. He spoke only briefly about climate change—talking about it roughly as much as diabetes—leaving some Democrats puzzled over Biden’s path forward on what he calls an “existential threat.”

One hint Biden offered in his speech: He argued his climate plan would leave the average family with $500 in savings, grouping it with his push to combat inflation.

“My top priority is getting prices under control,” Biden said in the Capitol last night. “My plan to fight inflation will lower your costs and lower the deficit.”

That could help win over Sen. Joe Manchin (D-W.Va.), whose opposition killed Biden’s $1.7 trillion climate and economic bill. Manchin has cited inflation and the national debt as some of his key concerns.

“The president must convince Joe Manchin and other inflation hawks in Congress that electric vehicle incentives and other clean energy measures can limit long-term inflation,” said Paul Bledsoe, an adviser for the Progressive Policy Institute and a former Clinton administration climate official. “Otherwise, the centerpiece of Biden’s climate agenda will have a difficult time becoming law.”

Biden faces more challenges than just Manchin. The Supreme Court heard arguments this week in a case that could constrain federal authority to regulate climate pollution. Biden’s Interior Department has issued oil and gas permits at a faster pace than former President Trump’s did. And on Monday, U.N. scientists reported that climate impacts are compounding faster than expected—adding more challenges to Biden’s efforts to harden infrastructure against floods and fires.

The world must cut emissions in half by 2030 to avoid catastrophic warming, scientists have warned.

“President Biden has made incredible strides in pushing renewable energy, but the urgency of the climate crisis demands much more,” Natalie Mebane, senior director of climate with the Wilderness Society, said after the speech. “It’s time for the Biden administration to make a comprehensive plan for public lands that ensures they are part of the climate solution, instead of contributing to the problem.”

The climate lines in last night’s State of the Union were focused on the economy.

Biden touted the climate benefits from last year’s bipartisan infrastructure law, as well as a pending bill to accelerate U.S. innovation. Decarbonization, he said, means bringing jobs back to the U.S.

Linking clean energy to economic growth has been an on-again, off-again theme of State of the Union addresses since 1998, when President Clinton said Americans “have always found a way to clean the environment and grow the economy at the same time.” In 2008, President George W. Bush warned that “our security, our prosperity and our environment all require reducing our dependence on oil.”

But no president has ever translated those words into substantial climate action. Instead, U.S. political leaders have backed off decarbonization in response to economic fears. Even President Obama’s signature climate policy, the never-implemented Clean Power Plan, called for less decarbonization than the market ended up achieving on its own.

Now, facing an economic crunch of his own, Biden last night sought to connect his climate plan to specific things in people’s lives.

“Let’s provide investments and tax credits to weatherize your homes and businesses to be energy efficient,” he said. “Double America’s clean energy production in solar, wind and so much more. Lower the price of electric vehicles, saving you another $80 a month because you’ll never have to pay at the gas pump again.”

But last night also offered fresh examples of how hard it will be for Biden to resist the pressures that hobbled his predecessors’ climate agendas. Shortly before the State of the Union began, the administration said it would release 30 million barrels of oil from the Strategic Petroleum Reserve, coordinated with another 30 million barrels released by other countries, to ease fossil fuel prices.

Biden touted the oil release in his speech, saying “America will lead that effort.”

“And we stand ready to do more if necessary, united with our allies,” he added. “These steps will help blunt gas prices here at home.”

‘Looking at you, West Virginia’

“As I’ve told [Chinese President] Xi Jinping, it is never a good bet to bet against the American people,” he said. “We’ll create good jobs for millions of Americans, modernizing roads, airports, ports and waterways all across America. And we’ll do it all to withstand the devastating effects of the climate crisis and promote environmental justice.”

Rep. Sean Casten (D-Ill.) said Biden understands that climate policy is an effective foreign policy when it comes to countries not as committed to democracy. It’s also a way to diminish the power of the fossil fuel industry in Congress, he said.

“We’re also not dependent on parts of the United States that have become so dependent on being subsidized by fossil fuel extraction they’ve lost an ability to compete economically,” he added. “Yes, I’m looking at you, West Virginia.”

A majority of Americans support Biden’s plan to build out renewables without totally eliminating fossil fuels, according to a Pew Research Center survey released yesterday. The survey found 69 percent of Americans want to build out renewable and alternative energy resources and take steps to become carbon neutral by 2050. But just 31 percent of Americans want to completely eliminate fossil fuels, according to Pew’s survey of 10,237 U.S. adults conducted in late January.

Republicans and the energy industry have been hammering Biden for not boosting domestic oil and gas producers since Russian tanks first moved into Ukraine. That was a key theme in the GOP’s response to Biden’s speech last night. It is also a central concern of Manchin, who called for ending all Russian energy imports yesterday.

“As a nation we must commit to once again achieving complete energy independence by embracing an all-of-the-above energy policy to ensure that the American people have reliable, dependable and affordable power without disregarding our climate responsibilities,” Manchin said in a statement.

Biden is clearly sensitive to that criticism, committing to cheap gasoline while touting the need for climate action. But trying to simultaneously maintain those two disparate positions won’t bring the fractured wings of the Democratic Party any closer.

After his speech, progressives made clear that Biden’s scant climate mentions weren’t enough.