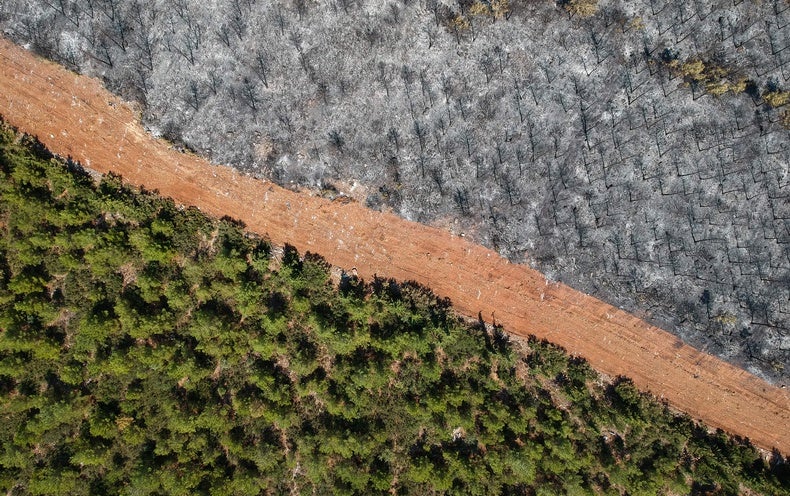 The April 4, 2022 report from the U.N. Intergovernmental Panel on Climate Change makes it clear that it is “now or never” for the planet. We are “firmly on track toward an unlivable world,” U.N. Secretary-General Antonio Guterres said in releasing the report. There’s every chance that global temperatures will soar by 3 degrees Celsius, twice as much as the agreed-upon 1.5 C limit. Unless we take drastic steps and cut down emissions by 43 percent within this decade, the full force of this existential threat will be upon us.

In this context, it is interesting that some researchers have taken artificial intelligence—a technology often considered an existential threat in its own right– and tried to turn it into a vehicle for climate action. Since I’m writing a book on nonhuman actors in the 21st century, I have a more-than-passing interest in how these experiments turn out and what they say about our collective future. Could it be that climate change is the catalyst that transforms AI, challenging it to be more crisis-responsive, more focused on innovations addressing large-scale hazards? Such technology could be just what we need at this juncture. It could generate emergency action very different from the profit-driven, bias-amplifying and misinformation-spreading algorithmic regime we are familiar with. Giving much larger play to input from the field, from networks of engaged participants, this “climate AI” could be a game changer in the tech ecosystem, as in the physical ecosystems now facing their worst risks.

This new ethos was reflected in a report written by the Global Partnership on Artificial Intelligence and presented at the COP26 climate summit last November. The 15 co-authors, researchers and activists from 12 countries, argue that while we need to be vigilant about racial and gender biases and the tendency of big data to perpetuate inequities, AI can nonetheless play a key role in prediction, mitigation, and adaptation, in ways we can’t afford to ignore.

Take the visualization platform This Climate Does Not Exist, timed to coincide with the COP26 report. Built by motivated young researchers, this project demonstrates that a harmful technology can be repurposed to make climate change personal, visceral and unforgettable for the general public. Using the same machine learning algorithm that swaps visual and audio data to produce fabricated, hyperrealistic videos called deepfakes, it generates similarly real-looking views of floods or wildfires for any street address.

We have become “a bit blasé” about climate disasters when they happen to strangers, says lead researcher Sasha Luccioni, a postdoc at the Quebec Artificial Intelligence Institute. Seeing our own houses standing in several feet of water makes us take notice.

While the full impact of This Climate Does Not Exist remains to be seen, what seems clear is that AI is phenomenally adaptive, able to pivot to entirely different demands under crisis conditions. It’s most innovative coming from practitioners galvanized by fast-approaching disasters. Two other initiatives, from Microsoft and NASA, make clear that to fulfill ambitious climate goals, AI needs a participatory democracy, networks of on-site innovators deeply knowledgeable about their locales and acting urgently for just that reason.

Microsoft is building a planetary computer as the centerpiece of its AI for Earth program. First proposed in 2019 by the company’s chief environmental officer Lucas Joppa, it is designed to work as a geospatial search engine to expedite climate decision-making and “avert environmental disaster.” Toward that end, it aggregates data from NASA, NOAA and the European Space Agency, as well as data collected through the partnership between the U.K. Met Office, the Chinese Meteorological Administration and the Institute of Atmospheric Physics in the Chinese Academy of Sciences.

But state-of-the-art data sets alone aren’t enough. In a 2020 blog post, Microsoft president Brad Smith wrote that the planetary computer needs active input from the crowdsourced networks receiving grants from his company, such as iNaturalist, a mobile app platform for amateur ecologists to upload and share biodiversity information, now available in 37 languages. The “planetary computer is incredibly complex,” he stated, “and we cannot build it alone” without “the work and demands of our grantees.” To make a difference to at-risk ecosystems, AI needs engaged communities as much as multinational datasets.

The recently announced Multi-Mission Algorithm and Analysis Platform, jointly developed by NASA and the European Space Agency, is emphatic on this same point. The open-source project will begin by collecting data on the biomass of forests, crucial to monitoring climate change as forests absorb carbon when they flourish, and release carbon when they burn and die. Since forest types vary greatly from region to region, and since the data will be coming from a variety of sources, “including satellite instruments, the International Space Station, and airborne and ground campaigns,” the job for AI is to combine these heterogeneous data sets and make them “interoperable.”

Rather than imposing a single, supposedly universal, metric across the planet, the input protocol from NASA and ESA allows research communities to remain diverse, sticking with their own languages and methods. The cloud-based AI platform then integrates the data analytically to make it sharable for everyone. Even more ambitiously, this input-friendly architecture also encourages researchers to “collaboratively develop algorithms and codes” to meet project-specific needs. These new algorithms will go into an open-access code repository. The program is designed throughout to minimize barriers to participation and make sure that anyone interested in environmental data can pitch in, turning this platform into a vehicle for on-the-ground vigilance and inventiveness.

Because climate change affects each location differently, AI innovations here rest on broad-based input as an empirical foundation that motivates, validates and diversifies. This subset of artificial intelligence, turning an unprecedented crisis into grounds for solidarity, couldn’t be more different from social media algorithms, facial recognition software and autonomous weapon systems. The U.N. report notes that the path to a noncatastrophic future is technologically feasible. “Climate AI” could be a key part of that equation. It’s up to us to make the most of it.