What a Power Cutoff Could Mean for Chernobyl’s Nuclear Waste 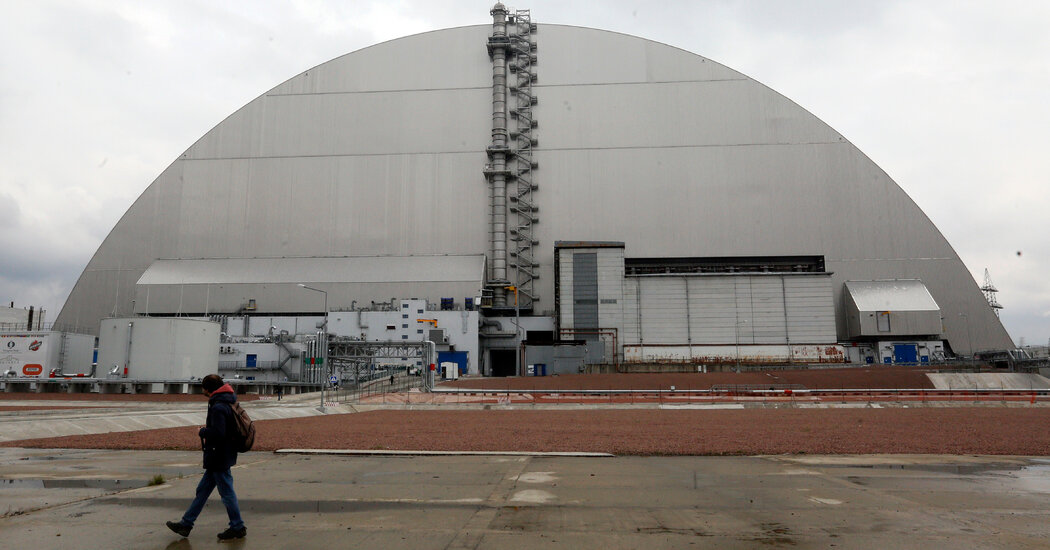 The long-defunct Chernobyl plant in Ukraine is completely dependent on outside sources of electricity. So when that power is cut, as Ukrainian officials and the International Atomic Energy Agency say it has been by Russian troops, problems can result.

As of Wednesday Chernobyl, the scene of the worst nuclear disaster in history when one of its four reactors exploded and burned 36 years ago, is operating mainly on power from diesel generators. A former longtime employee of the plant with knowledge of conditions there said that some equipment was functioning on battery power as well, and that firefighting systems, as well as radiation monitoring, had been affected.

The I.E.A.E. said Wednesday that it saw “no critical impact on safety” at the complex. But what could happen if all these backups failed and Chernobyl was left with no power at all?

The Chernobyl plant came online in the late 1970s, with the completion of its first two reactors. By 1983 the third and fourth units were operating, including the one that was destroyed three years later.

That accident, the result of an ill-advised and ill-executed test, killed more than two dozen people in its immediate aftermath, most from exposure to high levels of radiation. The burning reactor core produced a plume of radioactive particles that spread across parts of Europe, and many more people suffered long-term effects, including cancers, from exposure.

Contamination was worst in a large part of Ukraine and Belarus around the plant, which was declared an “exclusion zone” and remains largely off limits. Villages and a city were permanently abandoned.

The plant’s remaining three reactors were eventually shut down, the last in 2000. The nuclear fuel has been removed from all of them, and the turbines and other equipment that generated power have mostly been removed.

With no operating reactors at the plant, there is no risk of a core meltdown as there would be if an operating plant lost power and could no longer circulate water through the reactor. This is what happened at the Fukushima reactors in Japan in 2011, when an earthquake and tsunami wiped out backup power systems.

But Chernobyl carries some other risks related to the large amount of nuclear waste on site.

The fuel inside a reactor eventually becomes used up and is replaced. As is common practice in the nuclear power industry, the fuel removed from all four Chernobyl reactors over the years, more than 20,000 assemblies in all, is stored in pools of water that dissipate the heat produced as the fuel decays radioactively. When fuel is newly removed from a reactor and is still highly radioactive, there is a lot of decay and thus a lot of heat, so plants need power to run pumps that circulate the storage water, removing excess heat in the process.

If the water in storage tanks got so hot it boiled off, the fuel would be exposed to the air and could catch fire. That, too, was among the risks in the Fukushima disaster.

The I.A.E.A. has said that the used fuel assemblies at Chernobyl are old enough and have decayed enough that circulating pumps are not needed to keep them safe.

“The heat load of the spent fuel storage pool and the volume of cooling water contained in the pool is sufficient to maintain effective heat removal without the need for electrical supply,” the agency said.

Before the Russian invasion of Ukraine, workers had started transferring some of these fuel assemblies to a long-term dry storage facility, which began operating in 2020. Fuel assemblies are ready for dry storage when they have cooled enough to be safely exposed to the air.

The other main source of nuclear waste, which is unique to Chernobyl, are the ruins of the destroyed reactor itself. An estimated 200 tons of fuel remain there, in a lava-like mix with molten concrete, sand and chemicals that were dumped on the reactor during the disaster.

This highly radioactive mixture is found throughout the remains of the reactor, having flowed through doorways and drain pipes and down stairwells and other parts of the structure before hardening. Some of these fuel-containing materials, as they are called, are in places that are completely inaccessible and have only been studied by boring into them.

In the chaotic, jumbled remains of the destroyed Chernobyl reactor, there is no cooling system for a loss of power to affect.

But in recent years there have been episodes in which nuclear reactions have started spontaneously in pockets of these fuel-containing materials, leading to spikes in radiation levels. They have been monitored and will have to be dealt with someday.

Without monitoring, of both humidity and radiation, workers would not know if any new episode was occurring. The former employee with knowledge of conditions at the plant said that ventilation systems that helped control humidity levels had stopped operating.

Since 2017, the destroyed reactor has been covered by a large arched structure, intended to confine the waste and safeguard against any release of radiation. The structure is also meant to allow the work of removing waste to long-term storage to begin, a process expected to take decades.

The facility was only granted an operating license by Ukraine’s authorities last year, so the work had only just begun. There are several large cranes and other specialized equipment to allow crews to work safely. With no power supply, most, if not all of that work, could not proceed.