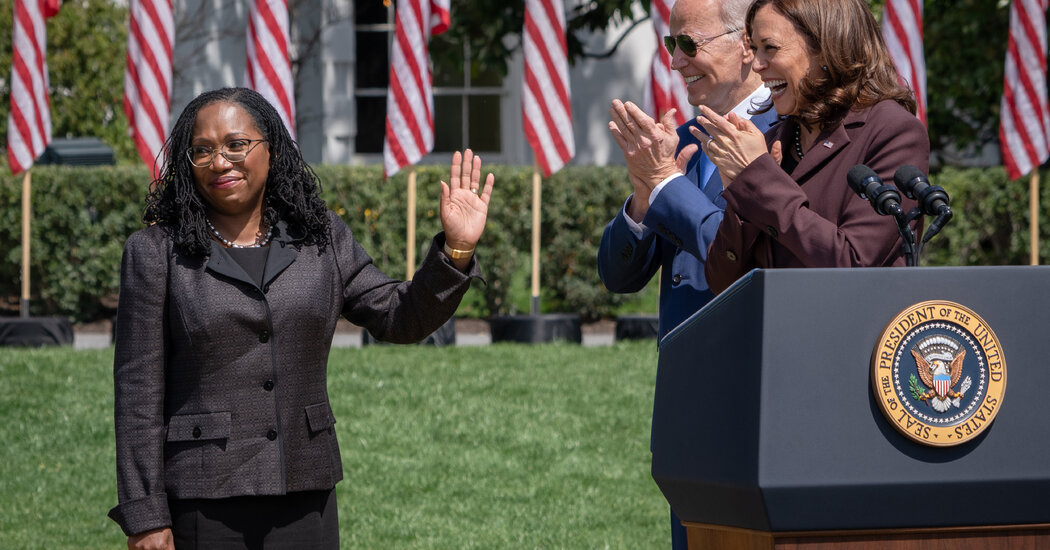 WASHINGTON — Judge Ketanji Brown Jackson, the first Black woman to be appointed to the Supreme Court, said on Friday at a White House ceremony celebrating her confirmation that it was the honor of her lifetime, and that she understood what it had meant to the young Black women and girls who followed along with her nomination process.

She told the crowd gathered on the South Lawn that it had taken her family one generation to go from enduring segregation to putting a woman on the Supreme Court, but she noted that it had taken the country much longer.

“It has taken 232 years and 115 prior appointments for a Black woman to be selected to serve on the Supreme Court of the United States,” she said. “But we’ve made it. We’ve made it. All of us.”

Speaking a day after the Senate voted to confirm her, Judge Jackson said she was daunted by the idea of being a role model to so many, but that she was ready for the task. She paraphrased from Maya Angelou’s “Still I Rise” to underscore her point: “I do so now while bringing the gifts my ancestors gave. I am the dream and the hope of the slave.”

It was a moment that prompted people who had been seated on the South Lawn, many of them Black women, to rise and applaud.

Judge Jackson’s confirmation was also a time for celebration for President Biden, who hailed the moment as one of “real change” in American history as he and his supporters cheered the ascension of the first Black woman to the court.

In her remarks, Judge Jackson recalled substantive meetings with 97 senators and thanked them for their role in the confirmation process, offering a graceful coda to hours of televised interactions with senators whose questioning was hostile at times. Once again, she pledged judicial independence.

Judge Jackson noted that she had “spent the better part of the past decade hearing thousands of cases and writing hundreds of opinions,” adding, “At every instance, I have done my level best to stay in my lane and to reach a result that is consistent with my understanding of the law and with the obligation to rule independently, without fear or favor.”

Judge Jackson will not take the bench for months; Justice Stephen G. Breyer, whom she will replace on the court, has said he plans to retire this summer, at the end of the current term.

For the ceremony on Friday, White House officials said they had invited the three Republican senators — Susan Collins of Maine, Lisa Murkowski of Alaska and Mitt Romney of Utah — who voted with Democrats to confirm Judge Jackson, lending a modicum of bipartisanship to an otherwise bitterly polarized process.

The Republican senators were not in attendance at the event, but Mr. Biden praised each one of them for voting to confirm the judge.

A spate of coronavirus cases among lawmakers and administration officials this week whittled down the prospective guest list. Ms. Collins said on Thursday that she had tested positive, as did several Democrats who had been near Mr. Biden in recent days, including Speaker Nancy Pelosi. The president tested negative on Friday morning, a White House official said.

Jen Psaki, the White House press secretary, told reporters this week that Mr. Biden’s experience as the chairman of the Senate Judiciary Committee had given him “historically exceptional preparation” for a successful nomination process.

Mr. Biden said on Friday that Judge Jackson had endured “verbal abuse” and “vile” personal attacks but had shown poise through more than 20 hours of questioning in confirmation hearings that at times turned bruising.

At the White House on Thursday, Mr. Biden and Judge Jackson watched the Senate’s confirmation vote together from the Roosevelt Room. The White House shared video on the president’s Instagram account of the moment when the two watched Ms. Harris announce the 53-to-47 vote in favor of the judge’s confirmation.

“All right!” Mr. Biden exclaimed, pumping his fist and wrapping his other arm around Judge Jackson, who clasped her hands and smiled.

The president then took a selfie with the judge in front of a television screen displaying the final vote count.

Judge Jackson was born in Washington, D.C., and grew up in Miami. She graduated from Harvard College and Harvard Law School, Justice Breyer’s alma mater, and went on to clerk for him during the 1999-2000 Supreme Court term.

While her confirmation does not change the court’s ideological balance — conservatives appointed by Republicans retain their 6-to-3 majority — it achieved another first: All three justices appointed by Democratic presidents will be women.