Website Crashes and Cyberattacks Welcome Students Back to School 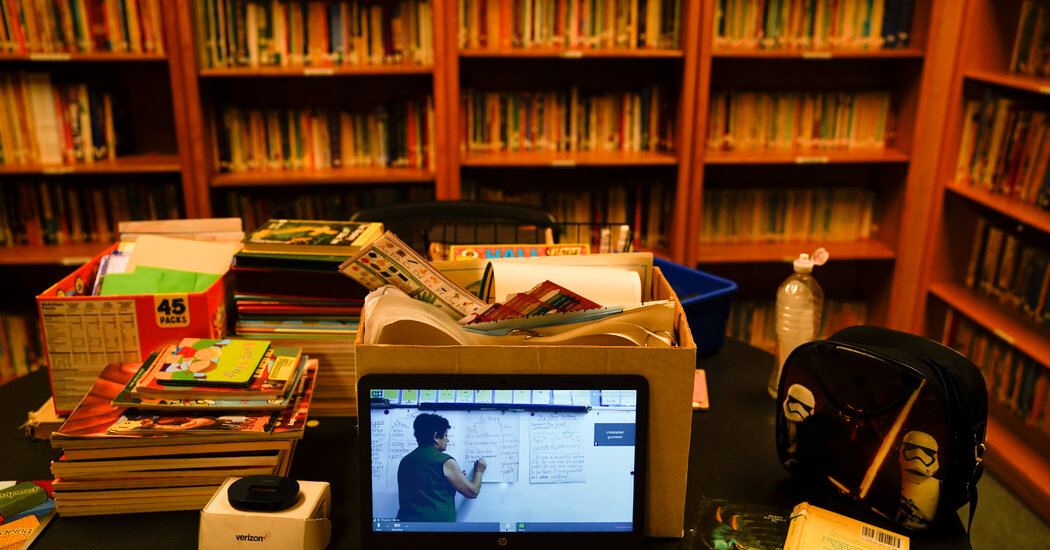 A ransomware attack forced Hartford, Conn., to call off the first day of classes. A website crash left many of Houston’s 200,000 students staring at error messages. And a server problem in Virginia Beach disrupted the first hours back to school there.

For millions of American schoolchildren, the Tuesday after Labor Day traditionally marks the end of summer vacation and the start of the first day of classes. But this year, instead of boarding buses and lugging backpacks, many students opened their laptops for online instruction at home, only to encounter technical glitches.

For Jessica Rios, the problems for her four children in Houston schools started early. Following a video conference with their teacher on Tuesday morning, her second-grade son and his classmates were supposed to log into the district’s online learning hub. Quickly, the children started unmuting themselves to complain, Ms. Rios said.

“All of them in the class were like, ‘It’s not loading,’ ‘It’s showing an error,’ ‘It’s saying unavailable,’” she said. Then her three other children encountered problems, too.

“The district had five months, which I feel was ample enough time for them to be able to work at least the major kinks out,” Ms. Rios said. In a news conference, the district’s interim superintendent, Grenita Lathan, acknowledged the problem and asked for patience.

Districts that returned before Labor Day have encountered similar problems. In Philadelphia, students had trouble logging on last week because of a server issue. North Carolina schools encountered a statewide software problem on the first day back last month. And some families in Seattle, which had a sort of trial run for school on Friday, said they were kicked out of class calls or had problems connecting to text chats and camera feeds.

“A lot of districts are just wildly unprepared for online learning,” Morgan Polikoff, a professor of education at the University of Southern California, said. “Not because they’re incompetent or aren’t trying; they just don’t have the expertise to do this.”

He said some of the technical difficulties stemmed from a lack of sufficient preparation for online learning over the summer, when many districts were still focused on opening in person — until surging coronavirus cases in much of the country and concern by parents and teachers forced many to reverse course.

But those issues, he said, are merely a symptom of a larger problem faced by the nation’s 13,000 school districts: a lack of guidance from state and federal education officials. Rather than receiving recommendations for best practices and coordinated purchasing plans, districts large and small were largely left on their own while tackling the huge challenge of finding virtual learning platforms and signing contracts within a few months.

“It’s just way too much to even think about as a district leader,” Dr. Polikoff said. “You’ve got to figure all these things out for yourself.”

Tuesday was the first day of classes in some of the nation’s largest districts, including Chicago, Dallas and Baltimore, along with many suburbs of Washington, all of which started remotely. Some still hope to open classrooms several weeks from now if virus caseloads decline in their communities and if buildings can be prepared for students.

In New York City, the nation’s largest district, teachers and staff members reported to work on Tuesday, but the city’s 1.1 million students will not arrive until Sept. 21 — 10 days later than initially planned. Mayor Bill de Blasio announced the shift a week ago after many educators said classrooms would not be ready to reopen this week.

In other parts of the country, including several states in the South and the Midwest, schools have been open — some in person or with a hybrid model — for more than a month, resulting in student quarantines and temporary shutdowns in some districts. Others seem to have reopened without major outbreaks, although reporting is uneven, making cases difficult to track.

In places that have opened with online classes, remote learning has continued to be a major challenge, as it was in the spring when widespread absenteeism, lack of technology, poor broadband connections and other challenges led to growing student achievement gaps by race and income. Glitches and sabotage have only added to those frustrations.

In Virginia Beach, when students and teachers tried logging in for their first day of classes on Tuesday, they were blocked by an issue with the cloud-based web filter that the district uses to monitor students’ online activity. Service was restored before noon, according to a district spokeswoman, who said other districts on the East Coast had similar problems with the filter provider.

Aaron Spence, the Virginia Beach superintendent, said technical difficulties should be seen in the context of the unprecedented task facing schools that had to prepare for the option of both online and in-person learning.

“We’ve had to build two school systems from the ground up,” he said — a task that included building out wireless infrastructure for 30,000 students, developing a virtual learning system, training 5,500 teachers and providing technical support staff and resources, all within a matter of months.

“We are rising to that challenge,” he said, “but it has been a heavy lift.”

In some districts, that challenge has been compounded by deliberate attacks. Last week, online classes in Miami-Dade County, the nation’s fourth-largest district, were choked by glitches for days. A 16-year-old student at South Miami Senior High School was arrested on Thursday in connection with cyberattacks that contributed to those issues.

In Hartford, the district had spent many weeks preparing for a mix of online and in-person classes. But over the weekend, officials found that cyberattackers had targeted some 200 of the city’s servers with ransomware — including the one that manages school bus routes. The district was forced to delay the first day of school, leaving nearly 18,000 students in limbo.

“We had a very unusual summer with everything we had to do to get ready to go back,” John Fergus, a spokesman for the district, said, adding, “This is not something I thought we’d be dealing with on the first day.”

Ally Fonte said her two sons’ teachers at North Beach Elementary School in Miami-Dade County were able to adjust swiftly to glitches and cyberattacks on the first day of school last week. “They had kind of anticipated technical difficulties,” she said, “just not on this scale.”

But Ms. Fonte said the district’s remote instruction model was still “a fiasco.” Both of her sons, who are in first and third grades, have struggled to follow a maze of teacher schedules on multiple online platforms. The technical issues have added to the difficulty, requiring her to frequently help.

“It isn’t sustainable,” Ms. Fonte wrote in an email to the school principal on Tuesday, adding in an interview, “I am at the point where I will have to let them fail Spanish, P.E. and music, because I can’t manage their two schedules full-time on top of my full-time job.”