We Need a Global Plastics Treaty to Stop an Environmental Disaster 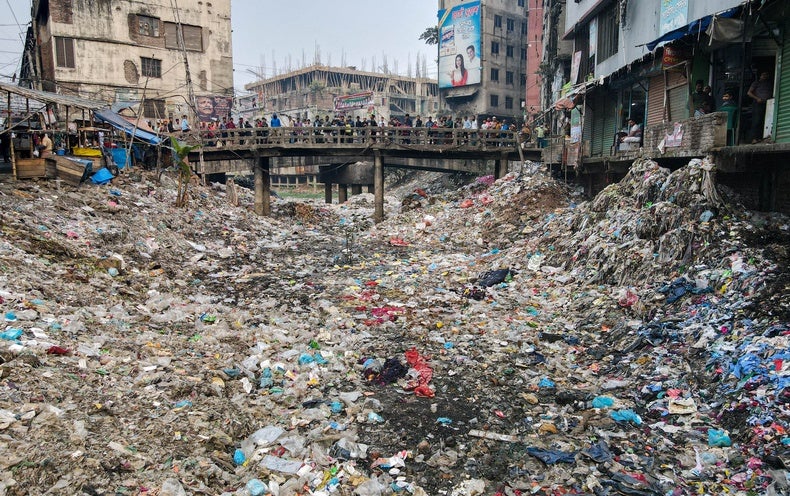 A dump truck’s worth of plastic enters our oceans every minute. Tiny bits of plastic are in many of the foods we eat, to the point we may be ingesting about a credit card’s weight of the material every week.

As with climate change, we’re running out of time to solve the plastics problem. According to the landmark 2020 report “Breaking the Plastic Wave,” if we delay dramatic action by just five years, an additional 80 million metric tons of plastic will end up in the ocean by 2040. This is equal to about half of all the plastic that has accumulated in Earth’s oceans from the start of the plastics era up to now.

This month and next, talks during the fifth session of the United Nations Environment Assembly in Nairobi, known as UNEA-5.2, will be instrumental in determining the fate of the plastics crisis. Over the coming days, leaders from 193 countries will discuss the mandate for what is likely to become the next global agreement to address plastic pollution. Once that mandate is in place, a treaty will be negotiated.

There is still so much more to do to ensure that the solution is a truly global one. At Ocean Plastics Leadership Network (OPLN), we are working through a way to do just that.

In preparation for the gathering, OPLN, together with the World Wildlife Fund and Greenpeace, has been running the Global Plastics Treaty Dialogues for about a year. Our goal has been to create a forum for the various people and groups involved in the plastics lifecycle across the world to have their voices heard prior to the negotiating process.

This meant bringing together groups that traditionally do not sit at the same table—and often stand in vehement disagreement. The biggest companies in the plastic industries sent their leaders; these included petrochemical companies (that produce plastic resin), converters (that make plastic containers), consumer goods companies (like the Coca-Cola Company, P&G and Colgate-Palmolive), and waste management companies.

At the dialogues, we sat these stakeholders at the same table with people with whom they may never otherwise interact: waste collector coalitions from the Global South that depend on recycling plastic for their livelihoods, advocacy nongovernmental organizations, industry lobby groups, U.N. officials, elected government ministers, financial institutions and more. From there, some interesting conversations have taken place.

In a testament to how far the discourse has come, even the American Chemistry Council, which represents the petroleum industry and petrochemical sector, now agrees that a plastics treaty is necessary. Meanwhile, 100 of the biggest companies in the world, including Pepsico, Starbucks and Unilever have issued a joint statement calling for a legally binding treaty that creates common global rules for plastic products, design and management and that reduces virgin plastic production.

Of course, there is still tension about what the treaty should do. While the petrochemical sector wants to keep the focus on waste management, environmental organizations are pushing to phase out single-use plastics, to build new reuse and refill systems and to address the impacts of plastic on human health, environmental justice and climate change. They want a treaty akin to the widely successful Montreal Protocol that led to the phaseout of ozone-depleting substances and which continues to be a strong regulatory device.

In our work over these past 13 months, it has become clear that we actually need more than the models that previous international treaties offer. OPLN has realized that a “Paris Agreement for Plastics” by itself, would be disastrously slow-moving and insufficient. We now see that this leaves out a crucial piece to the puzzle: global participation in the negotiating process, not just at the international level, but for local stakeholders across every U.N. Member State.

There is a lesson to be learned from the Paris Agreement here: let’s not draw things out and waste crucial years hiring consultants to write national action plans like we did after Paris. Some countries are still in the process of this, and we see every day how much that is eroding morale and resolve.

Whatever is decided at UNEA 5.2, stakeholders the world over will need a forum to talk to one another and build towards a quick implementation of plans. We should have open, multisectoral dialogues in every country, with recurring sessions while the treaty is being negotiated. The ideas and stakeholder mapping—or finding out what everyone wants out of a treaty—in these talks should feed global negotiations, ultimately informing treaty negotiations in a more dynamic and time-sensitive manner. To that end, OPLN has already begun convening Country Dialogues for the global plastic treaty in Chile, Malaysia, Indonesia, Ghana and the United States.

Consider the two billion people in the world, largely in developing nations, who do not have access to waste management collection services and are forced to illegally dump or burn their waste. Or the 15 to 20 million people among them who make their living selling plastic scrap that they find on streets, beaches and dumps to secondary recycled plastic markets. Both groups are a vital part of the plastics equation, and their interests must be represented at the negotiating table.

As our initial country-specific forums have taken place, we’ve started to see the chaos of the plastic crisis become just a bit more tangible. Waste-pickers from Accra, Ghana have expressed their concerns to a CEO based in San Francisco. An activist working to protect their fenceline community from the emissions of a refinery next door spoke directly with an executive from the company that owned it. This simply hasn’t happened in previous global treaty processes.

So while the U.N. is gathered in Nairobi, discussing, among other things, what it will take to stem the flow of plastics waste, we want to urge national leaders to support dialogues accessible to everyone, to quickly expand the scope of who is at the negotiating table in this global agreement.

Participation will be the lifeblood of the solution, and an unpopular treaty is sure to stall. Let’s set ourselves up for every holder of every stake to get involved as soon as possible—because there is no time to waste.