We Must Fight Restrictions on Voting Rights 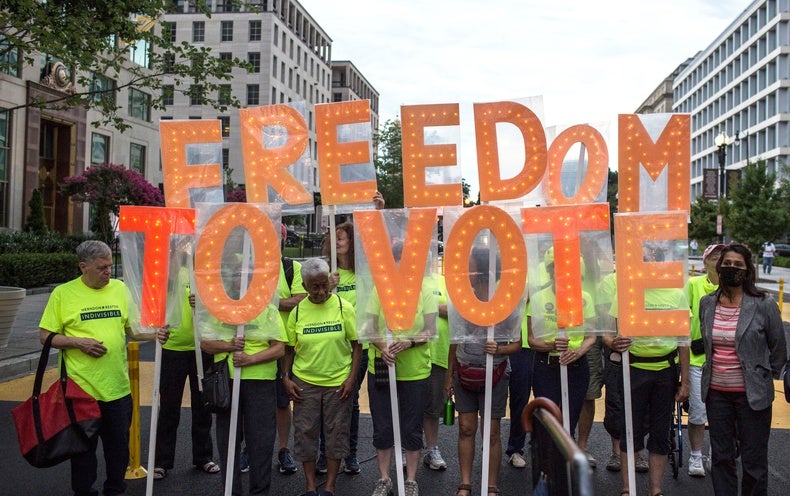 This week marks the 10th time that Americans have commemorated National Voter Registration Day, an occasion designed to encourage the one in four adult citizens who are unregistered to become part of those who can participate in elections. So far this year at least 18 states have enacted laws that will make it harder for Americans to vote. And even when the right to vote is formally protected, the costs of doing so prevent many from making it to the polls, including STEM (science, technology, engineering and mathematics) students, who are less likely to vote.

We need to reengineer the voting process to make it easier for everyone. While the focus is on the unregistered—and justifiably so—it is crucial to also direct our attention on the U.S.’s more than 4,500 local election officials (LEOs), who “determine who can vote, where they can vote, and how they can vote,” as a 2014 report from the think tank Demos put it. They determine whether voter registration applications are valid, in accordance with state and federal law. Hence we should give a shout out today to LEOs, who, until quite recently, toiled anonymously behind the scenes to ensure that elections went off without a hitch. Nearly 60 percent of states fill these positions through partisan elections, which can affect how LEOs carry out their tasks, but there are also strong professional norms.

During the 2020 election, many local election officials scrambled to implement state-mandated changes, such as providing no-excuse absentee mail ballots to all registered voters, as a means of ensuring that people could vote without risking exposure to COVID. Oftentimes LEOs made these efforts without additional resources and did so while being accused malfeasance. For example, according to the New York Times, Scott County, Iowa’s auditor and commissioner of elections and her staff put in about 200 hours of overtime while running an election that generated a nearly 80 percent turnout rate. But that election also brought out angry and threatening voters and led to the resignation of that election official. According to a recent report from the Brennan Center for Justice, by this past spring a third of surveyed election officials felt unsafe because of their job and nearly 20 percent were concerned about threats against their life.

By late December 2020, 21 election directors and deputy directors of more than a dozen of Pennsylvania’s 67 counties had either quit or were in the process of doing so. A Democracy Fund survey of roughly 850 local election officials reported that about one out of every six were planning to retire in the next three years. While retirements are a normal part of life, these numbers are higher than normal and indicative of the current partisan rancor. Of particular concern is the possibility that those leaving will be replaced by believers in former president Donald Trump’s “Big Lie.” In fall 2020, prior to the election, Steve Bannon encouraged Trump supporters to try to become local election officials, according to Forbes. At this time of unprecedented threats against electoral integrity, let us remember the local election officials, who are on the front lines of preserving our voting rights, and tell Congress that it is time to pass legislation to protect those who protect our democracy.

Then let us vote—and vote in numbers large enough to prevent those who would subvert the democratic process from using marginal irregularities in elections to spread doubt about their outcomes. How do we get more people to participate? The scientific evidence on how to increase voter registration, participation and integrity is clear: make it easy and transparent. States that have implemented automatic voter registration, universal vote by mail, early in-person voting and similar procedures that reduce the cost of voting have a higher turnout and lower inequalities in voting than states with more restrictive election laws. More than 50 percent of eligible Californians voted in the state’s gubernatorial recall effort this month—an extraordinary turnout for an off-year special election and one that was partly made possible by the fact that every eligible registered voter was automatically mailed a ballot, whether or not they requested one. This week California signed permanent universal vote by mail into law.

We need to keep pressuring state legislatures to adopt such transformative reforms, especially in states with more restrictive election laws, and tell Congress to enact federal protections, including the John Lewis Voting Rights Advancement Act and the Freedom to Vote Act. Members of Congress are scheduled to vote on the Freedom to Vote Act this week. That legislation would expand voter registration, require a minimum number of days and hours for early voting, and create a nationwide right to vote by mail.

After National Voter Registration Day, in the days, weeks and months that follow, in the short time that we have for Congress to act, we urge you to write, e-mail and phone your representatives and senators to support legislation that will allow every eligible American to be registered and vote.