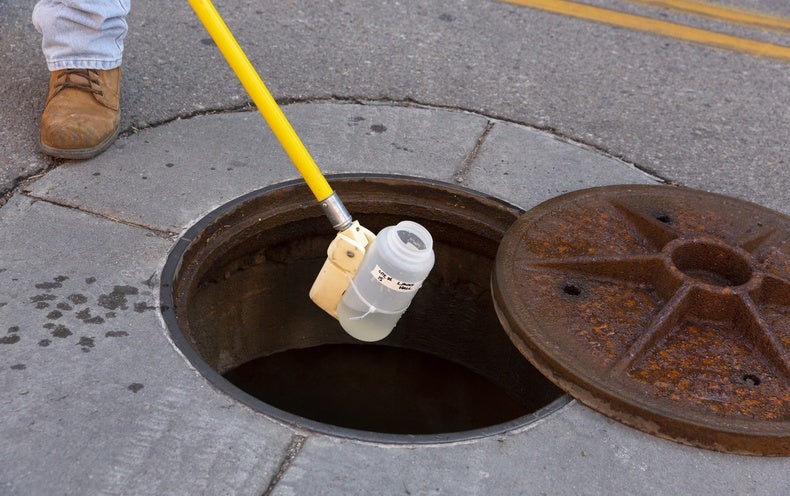 In 2020 experts at the U.S. Biomedical Advanced Research and Development Authority (BARDA) and other public health agencies watched a presentation that many thought was impractical at the time. Several companies proposed to regularly sample wastewater from sewers and treatment plants and run tests to detect SARS-CoV-2—the virus that causes COVID-19. People excrete the virus in their waste, and the companies suggested that tracking levels of its genetic material, or RNA, in sewage over time would provide a quick glimpse into whether the virus was rising in an area days or even weeks before a surge in patients with COVID.

“I have to say it wasn’t taken seriously [by us] at all,” says Rick Bright, who directed BARDA at the time and is now senior vice president of pandemic prevention and response at the Rockefeller Foundation. Although wastewater tracking has been used in the past to track polio and gastrointestinal diseases, it did not seem like a priority during an ongoing pandemic, he says.

Then, last November, researchers from several universities and the U.S. Centers for Disease Control and Prevention detected the Omicron variant in wastewater from northern California, Houston, New York City and other locations as early as 11 days before it was first detected in a person in the U.S. That advance notice could have given public health officials valuable lead time to institute stricter prevention measures—such as mask mandates—and to direct tests and other resources to a community. Such information could also enable authorities to lift restrictions when cases start declining. “All of a sudden, the lights were coming on,” Bright says. “We could make evidence-based policies instead of knee-jerk reactions.”

On February 4 the CDC announced it would be adding a wastewater component to its COVID Data Tracker. For the first time, sewage data from different states could be directly compared. More than 400 sites across the country are already enrolled in the CDC program, with more continuing to join each week.

The goal, says Amy Kirby, program lead for the CDC’s National Wastewater Surveillance System, is to provide an unbiased way of tracking COVID that is more comprehensive than monitoring cases of infection. Analyzing wastewater can detect asymptomatic cases and those in which a person is infected but never tests positive, as well as cases detected with at-home tests whose results are not reported to the CDC.

Running polymerase chain reaction (PCR) tests—the most accurate method for detecting SARS-CoV-2—on wastewater samples is not technically difficult, but until recently, setting up the infrastructure had never seemed worth the amount of effort and money required, Kirby says. “COVID really changed the calculus and made it a good investment,” she says. The CDC is also spending $233 million to bolster state and municipal surveillance efforts to track SARS-CoV-2 along with antimicrobial-resistant bacteria, influenza, the fungus Candida auris and foodborne infections such as norovirus and salmonella, Kirby says.

Environmental engineers who work on wastewater pathogens, such as Colleen Naughton of the University of California, Merced, are happy to see the technique taking off. “It’s definitely exploded throughout the world,” Naughton says. In September 2020 her group launched a database called COVIDPoops19 to map SARS-CoV-2 wastewater-monitoring sites worldwide. Since then the number of such databases has more than tripled. State or federal governments run many of the tracking efforts and are publishing the data in their own online dashboards.

Right now most of these efforts are looking for any traces of SARS-CoV-2, using PCR to amplify viral fragments and determine the total amount of virus present in an area relative to previous weeks or days. But some teams are working on more sophisticated technology that genetically sequences long sections of the virus. This approach allows researchers to determine not only what new mutations have arisen but also whether they all occur in the same virus or across a mix of different strains.

“What I love about it is it lets us start to see the understory of the viral rain forest,” says Christopher Mason, a geneticist at Weill Cornell Medicine in New York City. Instead of detecting major variants such as Delta and Omicron only once they start affecting humans, he says, monitoring all the variants in wastewater could allow scientists to see how SARS-CoV-2 is evolving before a new variant becomes an increased threat to humans.

In a study described in Nature Communications last month, researchers John Dennehy of the City University of New York’s Queens College and Graduate Center and Marc Johnson of the University of Missouri used in-depth sequencing methods to detect new forms, or lineages, of SARS-CoV-2 in New York City’s wastewater. These lineages, which had not yet been detected in a person, contained mutations that allowed them to infect rodents, suggesting that they may have entered the water system via New York’s ubiquitous sewer rats. The finding reinforces concerns that animals may serve as reservoirs for COVID, and tracking their infections could prove important for plans to curb the pandemic. But Johnson and Dennehy say there may be other explanations: the lineages might have evolved in immunocompromised individuals who had COVID for a long period, giving the virus time to evolve.

Despite the valuable lead time that wastewater tracking can provide, it cannot replace patient monitoring efforts, Johnson says. His team detected Omicron in New York City’s wastewater more than a week before the first case appeared in a patient in the U.S., but “if we hadn’t known it was Omicron, it wouldn’t have looked unusual,” he says. In other words, wastewater sequencing can provide such a vast amount of data that meaningful variants might get lost if researchers do not have more information about their clinical significance.

Wastewater monitoring has other notable drawbacks. Whereas COVID cases are currently so widespread that the virus is easily detectable in wastewater, less common infections such as those that cause hepatitis or foodborne illness might be more difficult to detect. And because different public health centers use different sampling techniques and record the data in different ways, it can be tough to compare them. Both CDC and Rockefeller Foundation scientists hope to develop ways to standardize different communities’ wastewater data so that they can more readily compare them with one another and with patient cases in each community.

Privacy is a concern as well: although taking a sample from a sewer or treatment plant in a city is inherently anonymous, monitoring a smaller outflow from a college dormitory, for example, might seem invasive. Megan Diamond, a researcher at the Rockefeller Foundation, who is working with Bright to develop a database of COVID wastewater data, says that it will be essential to work with communities to develop trust and educate people on what wastewater tracking can and cannot do.

Sequencing technology can also be expensive. And according to COVIDPoops19 data analyzed by the World Bank, more than 85 percent of tracking sites exist in high-income countries. And tracking efforts cannot be comprehensive even within the U.S., since researchers only have easy access to public sewer systems, missing the roughly 20 percent of U.S. households that use septic tanks. Naughton, the Rockefeller Foundation team and others are looking to expand the technology and the monitoring databases to developing countries, where fewer clinics and less patient surveillance make unbiased sampling methods even more valuable. “We need ways to make surveillance not just a first world luxury,” Bright says.