Washington, D.C., on Edge Over Protest of Jan. 6 Arrests 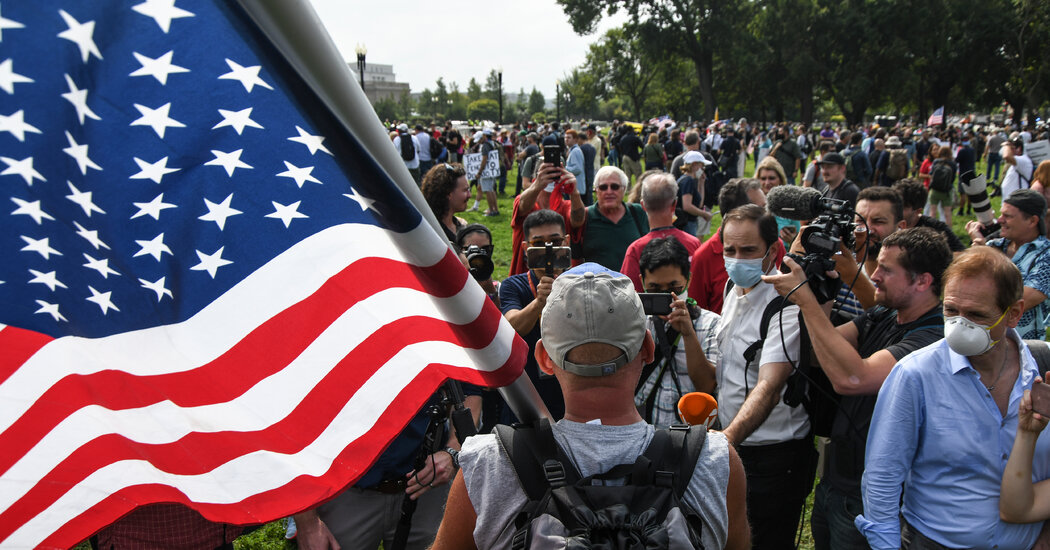 WASHINGTON — Fewer than 100 right-wing demonstrators, sharply outnumbered by an overwhelming police presence and even by reporters, gathered at the foot of the Capitol on Saturday to denounce what they called the mistreatment of “political prisoners” who had stormed the building on Jan. 6.

The peaceful gathering was the first significant right-wing protest since the Jan. 6 riot, and though even the organizers lamented the sparse turnout, the scene showed how the Capitol assault continues to reverberate eight months later.

Where only movable metal barriers stood between a mob and the Capitol on Jan. 6, layers of newly erected fence and dump trucks lined end to end guarded the building. Mounted police, absent eight months ago, now stood at the ready. Riot shields were stacked at Capitol entrances, and law enforcement from the capital region, including the Virginia State Police and the police departments for Fairfax County in Virginia and Prince George’s County in Maryland, arrived with armored cars. One hundred National Guard troops from the District of Columbia were also on alert.

The few scuffles on the outskirts of the rally were quickly squelched. The Capitol Police said on Twitter that they had arrested a few people at the event, including a man who had a gun and was charged with unlawful activities.

Rally organizers blamed the poor attendance on the show of force.

“Shame on the people and the system who put fear in the hearts of American citizens not to come out,” Cara Castronuova, a founder of Citizens Against Political Persecution and a self-described celebrity fitness professional, told the crowd.

There had been early indications that the event would be a shadow of the Jan. 6 protest, which was well organized by a variety of groups, featured an array of far-right personalities and included an appearance by President Donald J. Trump. This time, one of the groups behind the Jan. 6 event, the Proud Boys, had warned people away, and neither Mr. Trump nor any sitting members of Congress chose to attend.

The event on Saturday was used as a platform for men who hope to be the next generation of Republican politicians. They included Joe Kent, a former member of the Special Forces who is challenging Representative Jaime Herrera Beutler, Republican of Washington, in part because she voted to impeach Mr. Trump. Another speaker, Mike Collins, is a small-business owner in Georgia seeking to replace Representative Jody Hice, a pro-Trump politician who is forgoing re-election to challenge Brad Raffensperger, Georgia’s Republican secretary of state who refused Mr. Trump’s entreaties to tamper with the state’s vote count.

“We have political prisoners here,” Mr. Collins said. “The facts are clear: We’ve got nonviolent misdemeanor offenders that are currently being held with no bond, no access to lawyers, and sometimes in solitary confinement.”

Mr. Kent took up the same theme: “It’s banana republic stuff when political prisoners are arrested and denied due process,” he told the crowd, comparing the treatment of Jan. 6 rioters to what he had seen the U.S. military do in Iraq. He added, “This is a slippery slope and we are on it right now.”

The narrative spun from the podium was largely untrue or exaggerated. About 15 percent of those arrested so far in connection with the Jan. 6 riot have been denied bail and remain in pretrial custody — much lower than the overall federal pretrial detention rate of 75 percent. Moreover, all of those being detained on charges related to Jan. 6 are facing serious charges like assault or obstruction of Congress; none have been accused of only misdemeanors.

Far from jailing everyone, in fact, judges have granted bail to numerous defendants accused of violent attacks on the police or of belonging to extremist groups like the Proud Boys or the Oath Keepers militia.

There is also no evidence to back the charges, repeated from the podium on Saturday, that the authorities have imposed harsh conditions on Jan. 6 defendants because of their political beliefs. There was a recent 23-hour lockdown at the District of Columbia jail, but a jail spokesman said it was enforced throughout the facility to curb the spread of the coronavirus and not imposed solely on Capitol defendants. It has been lifted, she added.

But Saturday’s rally was not about facts.

The rally was organized by Matt Braynard, a former Trump campaign operative, and his organization, Look Ahead America. Mr. Braynard opened the event joking that he hoped “everyone got their wrists measured” for handcuffs, even as he asked the crowd to be respectful of the police.

He condemned far-right activists who had declared the event a “false flag” operation meant to help law enforcement track pro-Trump rioters, and as he spoke, channels on the encrypted messaging app Telegram frequented by such activists continued to accuse him of working on the police’s behalf.

“Nobody should be there,” wrote one person, while someone else called the participants “Craigslist actors.”

Bob Lyons, 70, a former Marine, came to the rally from Buffalo, N.Y. He said he was not disappointed by the turnout: “If one person showed up, it would mean that one person cared.”

“But if you look at this crowd,” he continued, motioning toward a scene dominated by reporters, not protesters, “there’s a lot of people that care.”

His wife, Ruth Lyons, 67, aired a familiar complaint from conservatives, arguing that the police had done little to stop or arrest racial justice protesters or left-wing agitators who committed violence in Portland, Ore., and other cities, and that those who had been arrested were not being prosecuted with the same vigor as those involved in Jan. 6.

The government has tried to rebut such claims, arguing in court that there was no comparison between the protests last year prompted by the murder of George Floyd in Minneapolis and the storming of the Capitol. While prosecutors acknowledged that those arrested during weeks of unrest at the Portland federal courthouse had committed “serious offenses,” they insisted that the rioters in Washington were involved in “a singular and chilling event” that threatened not only the Capitol but also “democracy itself.”

Ms. Lyons was unconvinced by such arguments.

“When you look at Portland and see what Black Lives Matter and other people got away with, the burning and the looting, they just looked the other way,” she said of the authorities.

“It’s un-American. It depends which side you’re on whether you get prosecuted or not,” she added.

Ricky Roy, 60, a T-shirt vendor selling pro-Trump merchandise on 3rd Street in front of the rally site, said he had been to every Trump event since the election and this was by far his worst day for sales.

Mr. Braynard and other organizers planned to hold about 20 additional events in State Capitols or other cities next Saturday, but a few were scheduled to coincide with the gathering in Washington.

In Seattle, a group of about 20 protesters stood in the rain under a white tent erected opposite the federal courthouse. In Charlotte, N.C., about a dozen people picketed across the street from the U.S. courthouse.

Philip Adkins, 66, wearing a gray T-shirt saying “We the People” in the same cursive lettering as the Constitution, said prosecutions were being decided on political grounds.

“If you are a Republican conservative Trump supporter, then you might as well hang it up because they are going to come after you hammer and tongs,” he said. “If you are a Democrat, they let you out of jail.”

In one sense, the rally in Washington was a success for the organizers and supporters of the defendants from the Jan 6. attack. When any attendee began speaking out in the crowd, a half dozen reporters swarmed with microphones in hand.

Asked what the goal of the rally was, Mr. Stewart was clear: “Get coverage.”