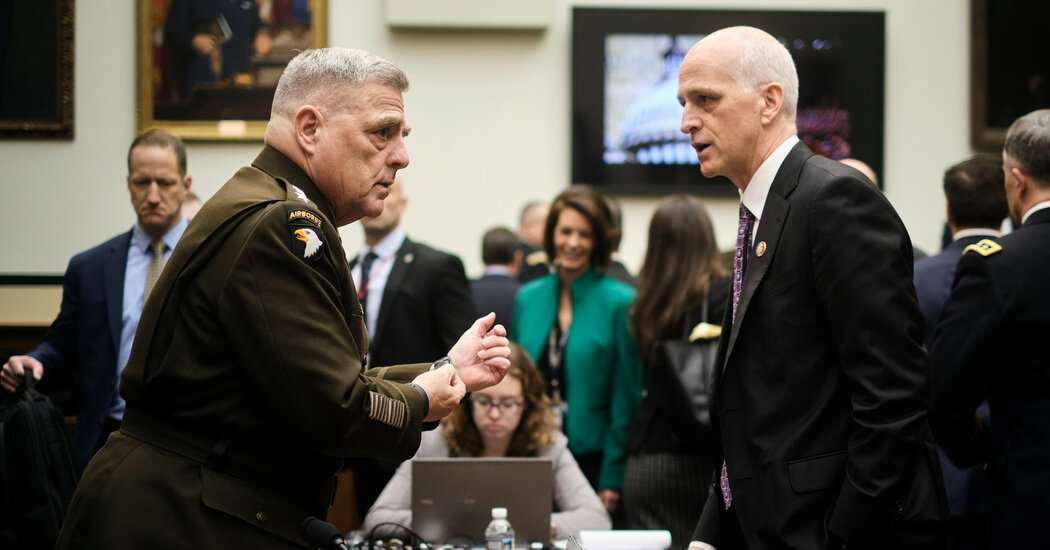 WASHINGTON — From his perch as chairman of the Armed Services Committee, Representative Adam Smith, Democrat of Washington, has long lamented what he sees as a Pentagon budget bloated by inefficient spending. When hawkish lawmakers led a successful charge last year to pour nearly $24 billion more into the military’s coffers, he opposed the move.

But last week, as Russian forces continued their assault on Ukraine and he pondered the size of the coming year’s military budget, Mr. Smith sounded a different tone.

“I haven’t picked a number yet,” he said, “but without question, it’s going to have to be bigger than we thought.” He added: “The Russian invasion of Ukraine fundamentally altered what our national security posture and what our defense posture needs to be. It made it more complicated, and it made it more expensive.”

His shift signals a stark new reality facing President Biden on Capitol Hill, where Democrats had already shown they had little appetite for controlling the defense budget, even as Mr. Biden declared an end to the era of ground wars and indicated he wanted to reimagine the use of American power abroad.

Now, facing a military onslaught by President Vladimir V. Putin in Ukraine, and rising fears of a protracted war in Europe and an emboldened China, lawmakers in both parties — including some who had resisted in the past — are pressing for vast increases in military spending to address a changed security landscape.

As images pour out of Ukraine of cities devastated by a relentless and indiscriminate volley of Russian missiles, Democrats and Republicans who have struggled to coalesce behind meaningful legislation to aid the Ukrainian cause are rallying around one of the few substantive tools available to them: sending money and weapons.

The House this week is poised to approve $10 billion in emergency funds to Ukraine, including $4.8 billion to cover the costs of weapons already sent to Ukraine and eastern flank allies, as well as the deployment of American troops. But already on Monday, Senator Chuck Schumer, Democrat of New York and the majority leader, suggested lawmakers could approve a $12 billion package, in a sign of how eager lawmakers were to send more aid to Kyiv. The United States alone has deployed more than 15,000 troops to Europe, while committing an additional 12,000 to NATO’s response force if necessary.

Beyond funding immediate needs, the consensus around more generous Pentagon spending previews a dynamic that is likely to drive negotiations around next year’s defense budget, potentially locking in the kind of large increases that Mr. Biden and many Democrats had hoped to end.

“I think people are sort of waking up out of this haze that we were living somehow in a secure world,” said Representative Elaine Luria, Democrat of Virginia, who sits on the Armed Services Committee.

The rapid shift in thinking is a setback for progressives who had hoped that unified Democratic control of the House, the Senate and the White House would translate into a smaller Pentagon budget and a reduced footprint of American troops around the world.

Representative Ilhan Omar, Democrat of Minnesota, said in a brief interview that she believed it was crucial that the United States provide Ukrainians with some defensive weapons, but added: “Do I think that there is a point where it becomes too much? Yes.”

Ms. Omar said she was particularly worried about the prospect of arming an insurgency, especially as civilians from around the world have flocked to Ukraine to help push back against the Russian Army.

“We’ve seen what the result of that was in Afghanistan, when we armed so many people to fight against the Russians,” said Ms. Omar, who was born in Somalia. “Many of those people went back to their own countries and caused a lot of havoc, including the one I come from.”

Mr. Biden last weekend authorized a $350 million package of weapons that included Javelin antitank missiles and Stinger antiaircraft missiles as well as small arms and munitions, a shipment that represented the largest single authorized transfer of arms from U.S. military warehouses to another country.

Many lawmakers want to go further. Several Republican senators have endorsed setting up a separate fund to support the Ukrainian resistance, signaling an appetite to continue arming those in Ukraine willing to fight for an extended period of time, even in the event their government falls.

A third round of talks. Ukrainian and Russian delegations met for another negotiating session and agreed to try again to open humanitarian corridors for civilians leaving Ukrainian cities under attack, but made no progress on ending the war.

An emotional virtual meeting on Saturday in which President Volodymyr Zelensky of Ukraine, who has been defiant in the face of continuing Russian attacks, pleaded with senators for additional weapons rallied more support for his cause.

“We should be signaling to the Poles and Romanians and others that this is something we would want to help them do,” Mr. Malinowski said.

Lawmakers are eyeing long-term solutions, too, in Europe and beyond. At an Armed Services Committee hearing last week, both Republicans and Democrats endorsed increasing the U.S. military presence in the Baltics.

Representative Elissa Slotkin, Democrat of Michigan and a former Pentagon official, called Mr. Putin’s invasion “a sea change” for “how both the Defense Department and the State Department should think about our presence in Europe.”

“I couldn’t agree more with my colleagues who have talked about putting more force in right now,” Ms. Slotkin said, adding later, “We have to completely re-evaluate deterrence and how we re-establish it.”

The war in Ukraine has also spurred concerns that Mr. Putin’s campaign will embolden President Xi Jinping, who has long sought to bring Taiwan back under Chinese rule, leaving some lawmakers to conclude that additional military support both in Europe and in the East is necessary.

“Our unified response in Ukraine should send a message of deterrence to Beijing of what will await if they invade Taiwan,” said Senator Todd Young, Republican of Indiana.

The dynamic has dealt a blow to those pressing to scale back military spending, who had been relying on Democrats in control of Washington — particularly antiwar liberals who have been most outspoken about the issue — to lead the way.

“It’s definitely a challenge for progressives who were making headway, at least in terms of winning some support on Capitol Hill,” said Erik Sperling, the executive director of Just Foreign Policy, a progressive advocacy group. “Now I think a lot of progressive members who were previously strongly with us are going to have a little bit of a challenge doing a balancing act there.”