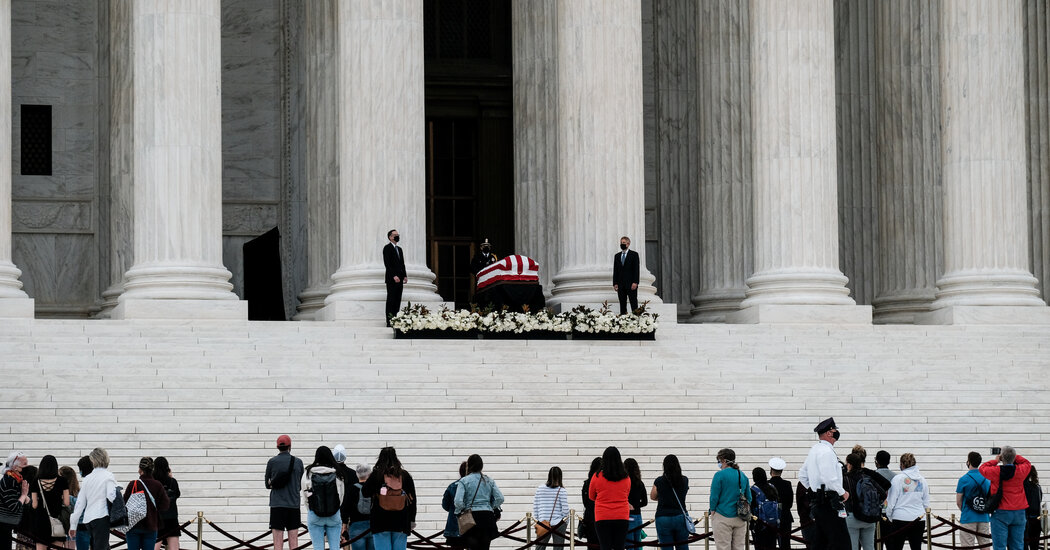 President Trump paid his respects to the late Justice Ruth Bader Ginsburg on Thursday morning, standing silently by her coffin at the top of the Supreme Court steps as he was jeered by protesters on the street below.

Wearing a face mask — unusual for him — and a sky-blue tie instead of his trademark red power tie, Mr. Trump stared ahead, and closed his eyes at times, near the justice’s flag-draped coffin.

But the quiet of the moment was punctured by the boos and shouts of demonstrators about a block away. “Honor her wish!” yelled some, a reference to Justice Ginsburg’s deathbed request that her replacement not be confirmed until a “new president is installed.”

Others shouted “Vote him out!”

It was not clear whether Mr. Trump and his wife, Melania, who joined him, could hear the heckling, which was clearly audible on television. They stayed for less than two minutes.

Following Mr. Trump was his chief of staff, Mark Meadows, and national security adviser, Robert C. O’Brien. Both men also wore masks, and bowed their heads with their eyes closed. Justice Ginsburg, who died last Friday, lay in repose at the court on Wednesday and Thursday.

Minneapolis Will Pay Influencers to Fight Misinformation During Officers’ Trials