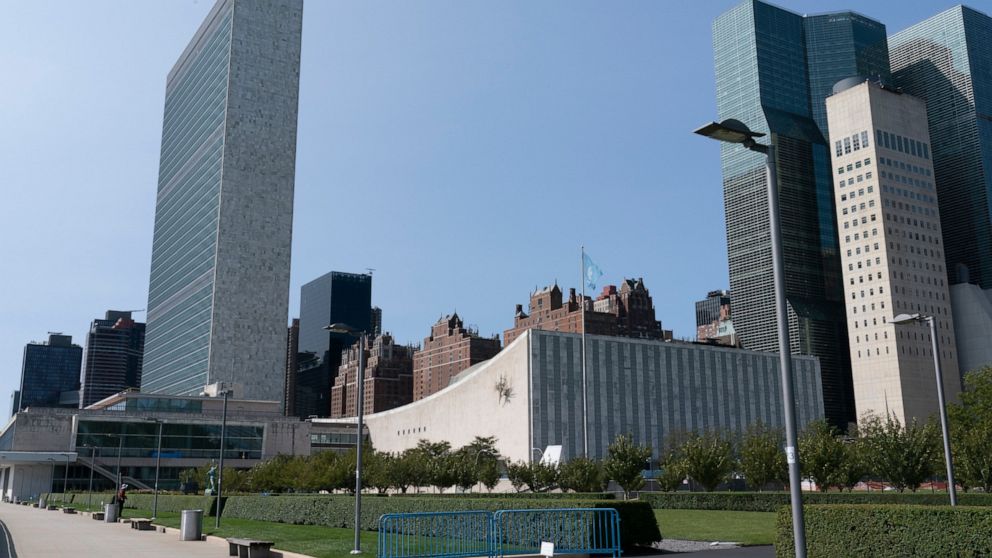 NEW YORK — In a normal September, leaders of nations big and small would converge on New York this week, giving the United States’ largest city a chance to show itself off as a crossroads of the world.

But this year, the usual lineup of presidents, premiers, monarchs and other dignitaries won’t be sweeping into the city for the U.N. General Assembly’s annual top-level meeting and the conferences, high-stakes sit-downs and hobnobbing that surround it. The assembly has moved online because of the coronavirus, compounding the pandemic’s blows to the city’s economy and worldly esprit.

“We are a cosmopolitan city. You know, we are the melting pot of the world, And to not have the world come to us this way is chipping away at this beautiful city that we had pre-COVID,” says restaurateur Philippe Massoud.

Ordinarily, he would be looking forward to one of the best weeks of the year at ilili, his Lebanese-Mediterranean restaurant. It’s about a mile (1.6 km) from the U.N. and has drawn a number of prominent figures, particularly during the annual assembly summits, he says.

“We’re a great place for diplomatic first dates,” Massoud explains. The eatery’s mezze —- small dishes meant for sharing — serve as icebreakers, he says: “Mezze and diplomacy go hand-in-hand.” Those tete-a-tetes aren’t on the menu during this assembly, which comes as ilili and other New York restaurants are already straining from a monthslong ban this spring on dining out, continuing limitations on table service, and worries about the city’s overall path to recovery.

As the epicenter of the U.S. outbreak this spring, New York City has lost more than 23,000 residents to confirmed and probable cases of COVID-19. That’s more than the nationwide death tolls reported in most countries.

New York wrangled the virus down to fairly low, stable levels in late spring but remains wary. On top of U.S. restrictions on certain international travelers, New York requires visitors from most U.S. states to quarantine themselves on arrival, and big gatherings and even indoor restaurant dining are still banned.

The city says it appreciates that the U.N., which donated 250,000 much-needed surgical masks in late March, took the initiative to hold its signature big meeting by video for the first time in its 75 years.

“From a city perspective, we have been very grateful for that,” said Penny Abeywardena, New York City’s international affairs commissioner. ”Unfortunately, the economic impact is going to be significant.”

Even in a city that has boasted of drawing 65 million visitors a year, the U.N. gathering is one of the most notable, and noticeable, annual events.

About 25,000 people entered the U.N. headquarters just on the first day of last year’s roughly weeklong meeting, according to the organization. The city’s hotels — currently making only about 20% of their normal revenue — usually reap about $20 million from assembly attendees’ room rentals alone, said Vijay Dandapani, the CEO of the Hotel Association of New York City, a trade group.

Police and federal authorities have mobilized massive efforts to protect General Assembly meetings, setting up such extensive roadblocks that the city declares “gridlock alert days.” Even pedestrians get screened at checkpoints blocks away from the UN complex. Police wouldn’t discuss this year’s security plan.

As the U.N.’s big week began Monday morning with a session marking the world body’s 75th anniversary, curbside police barricades lined the avenue outside but traffic flowed normally, with no police-escorted motorcades whizzing by. A smattering of news cameras stood in a usually jam-packed space outside the gate. In a nearby area often crowded with multiple groups of protesters, about a dozen demonstrators opposing Belarus’ authoritarian president had the place to themselves.

Local residents could go about their business as usual, though for many, security, blockades and protests are “features that we just accept as part of living near the U.N.,” said Roland Peracca of Tudor City, an enclave overlooking the headquarters. “I wish them well in their efforts to achieve world peace.”

There was little of the usual hubbub at the Millennium Hilton across from the U.N., a favorite of leaders, including Iranian President Hassan Rouhani. The hotel has been more oriented of late toward medical professionals, providing them a total of over 17,500 free nights earlier this year, the company said.

“We have people that we know them for years — every General Assembly, they come here. And this year, we’re going to miss ’em,” he said. “It’s killing our business.”

Beyond the diplomats and dignitaries, the assembly also brings aides, civil society activists and everyday citizens to New York, showcasing the city to the world, the hotel association’s Dandapani said.

“Just think about it — how many of those people, from 193 countries, get a chance to come here” and report back on the city’s diverse vibrancy, he mused.

“There is no city like New York,” he said, and “there is no better message than the cultural message that is sent over by the kind of polyglot, polyethnic city that we are.”