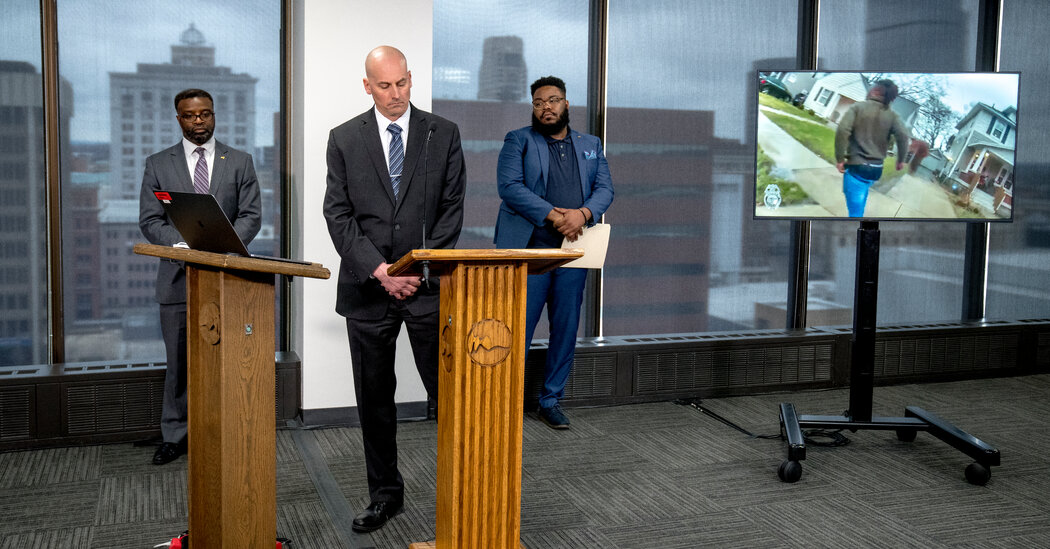 In a statement, Gov. Gretchen Whitmer expressed sympathy to the Lyoya family and called for any protests to be peaceful.

The consequences of traffic stops. A New York Times investigation in 2021 examined why traffic stops for minor offenses sometimes escalate into deadly encounters. Here are some key findings:

Common encounters turned fatal. Between 2016 and 2021, police killed more than 400 drivers or passengers who were not wielding a gun or a knife or under pursuit for a violent crime. Many vehicle stops begin for common traffic violations or questioning about nonviolent offenses.

Overstated risks stoke fears. A presumption of peril has become ingrained in court precedents — contributing to impunity for most officers who use lethal force at vehicle stops. In dozens of encounters, officers stepped in front of moving vehicles or reached inside car windows, then fired their guns, claiming self-defense.

Police missteps created danger. Many courts focus only on when an officer pulled the trigger, but some argue that judges and juries should scrutinize the actions of officers before they opened fire. It is possible that dozens of deaths could have been avoided had police officers not put themselves in danger.

“The Michigan State Police will conduct a transparent, independent investigation of the shooting,” said Ms. Whitmer, a Democrat and former prosecutor. “Then, prosecutors must consider all the evidence, follow the law and take appropriate action on charges. Justice is foundational to safety, and without justice, we are all less safe.”

Mr. Lyoya’s death was the latest in a series of incidents that have strained relations between residents and the Grand Rapids police. In 2017, officers searching for a middle-aged woman wanted for a stabbing instead handcuffed an 11-year-old girl at gunpoint while she was leaving a house. Those officers were not disciplined. Months prior, other Grand Rapids officers held five innocent teenagers at gunpoint. And in 2020, local outlets reported, an officer was suspended for two days after shooting a protester in the face with a gas canister.

City data from 2020 showed that Black residents who responded to a survey said they had less trust in the Grand Rapids police than their white and Hispanic neighbors did.

“We’ve constantly, constantly been talking about the harassment and the brutality that’s done right here,” Cle Jackson, the president of the Greater Grand Rapids N.A.A.C.P., said in a news conference after the video was released.

A spokeswoman for the Michigan State Police, the agency handling the case, declined to say when the investigation might be finished and handed over to prosecutors for a charging decision.

Christopher Becker, the prosecuting attorney in Kent County, which includes Grand Rapids, last week urged the police to hold off on releasing the video until the State Police investigation was completed. Chief Winstrom, who took over as police chief last month, responded by saying he would release the video by the end of this week, though he did not set a date for that release until Tuesday afternoon.