Venus Shows Its Hot, Cloudy Side 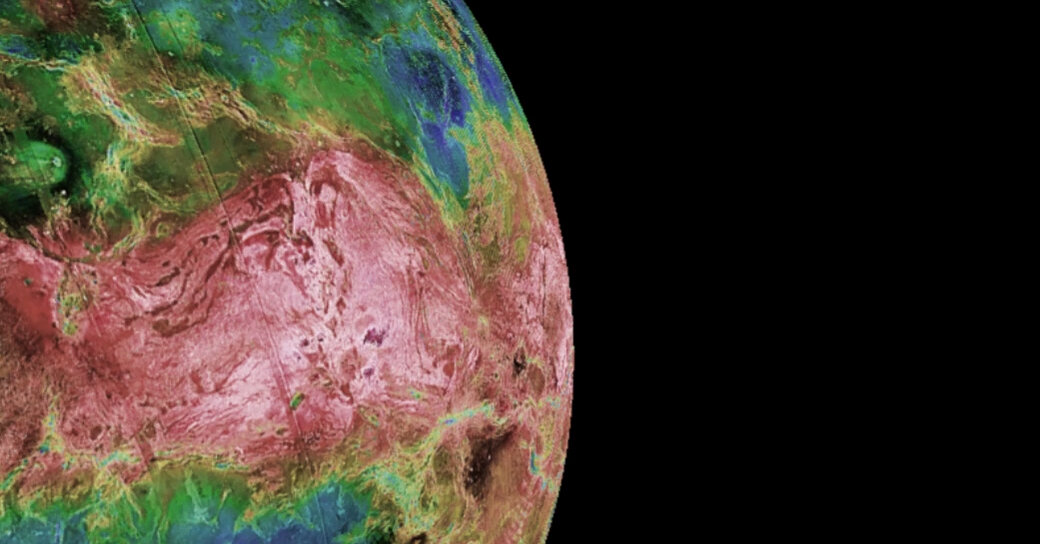 Venus is so hot that its surface glows visibly at night through its thick clouds.

That is what pictures taken by NASA’s Parker Space Probe have revealed.

The planet’s average temperature hovers around 860 degrees Fahrenheit, and thick clouds of sulfuric acid obscure the view. Until now, the only photographs of the Venusian surface were taken by four Soviet spacecraft that successfully landed there in the 1970s and 1980s, operating briefly before succumbing to the hellish environs.

During flybys of Venus, the Parker spacecraft pointed its cameras at the night side of Venus. It was able to see the visible wavelengths of light, including the reddish colors that verge on the infrared that can pass through the clouds.

“It’s a new way of looking at Venus that we’ve never even tried before — in fact, weren’t even sure it was possible,” said Lori Glaze, director of NASA’s planetary division.

In the Parker photographs, hotter locales like low-lying volcanic plains appeared brighter while those at higher altitudes like Aphrodite Terra, one of three continent-size regions on Venus, were about 85 degrees cooler and darker.

“It’s like you’re heating up a piece of iron,” said Brian Wood, a physicist at the Naval Research Laboratory in Washington, D.C., and the lead author of a study published this month in Geophysical Research Letters that described the findings. “It starts to glow a little bit at very red wavelengths. And so that’s what we’re seeing: the surface of Venus glowing at very red wavelengths, because it’s so hot.”

The photographs also showed a halo of luminescent oxygen in the atmosphere.

For Dr. Wood and other scientists working on the mission, the research was a crash course in planetary science. “I’ve never studied planets,” Dr. Wood said. “We’re all solar physicists. We’re experts on the sun, not planets.”

As its name indicates, the mission of the Parker Solar Probe is to probe the sun, withstanding searing temperatures as it dives through the sun’s outer atmosphere. By design, the trajectory of the Parker spacecraft makes several close flybys of Venus, using the planet’s gravity as a brake to allow it to get closer and closer to the sun.

The single camera instrument, known as the Wide-Field Imager for Parker Solar Probe, or WISPR, is not designed to look directly at the sun, which is far too bright, especially at close distances. Rather, WISPR peers to the side, at charged particles known as the solar wind that emanate from the sun at a million miles per hour.

Before the launch of the Parker Solar Probe in 2018, Dr. Glaze and Dr. Fox, then the project scientist for the mission, discussed the possibility of turning on the instruments during the Venus flybys. But no firm plans were made until after launch and the Parker Space Probe was operating smoothly.

“That was just because of safety concerns,” Dr. Fox said. “Until you’re up on orbit, you don’t really know how your spacecraft flies.”

Designed to capture dim solar wind particles, WISPR turned out to be adept at making out the faint glow on Venus’s night side.

It took a bit of trial and error to figure that out. In July 2020, on the first flyby where the camera was turned on, the scientists found out that if any part of the day side of Venus were in the field of view, the picture turned out to be much too overexposed.

“We didn’t really know what we were doing,” Dr. Wood said. “We quickly learned that that leads to a completely unusable image.”

But there were two images of just the night side. “Those are the images that revealed to us, ‘Wow, OK, so now we’re seeing something,’” Dr. Wood said.

The scientists were better prepared when their spacecraft made another flyby in February last year, capturing enough images to put together in a movie.

Other orbiting spacecraft, including Japan’s Akatsuki and the European Space Agency’s Venus Express, observed similar patterns at longer infrared wavelengths, which are not visible to the human eye. (Whether an astronaut in orbit above Venus’s night side would see the glowing that Parker detected is unclear, Dr. Wood said, because the human eye can barely detect these wavelengths.)

Because different materials glow at different intensities at different wavelengths, it might be possible to combine the Parker data with the infrared observations from the other spacecraft to help identify some of the minerals on the surface.

“This is where we’d like to go with these data, but we haven’t gotten that far yet,” Dr. Wood said.

The data will also help future Venus missions like NASA’s DAVINCI+, which is to launch at the end of the decade and send a probe parachuting to the surface. “I think it’s going to be a real exciting time,” said James Garvin, the principal investigator for DAVINCI+. “Venus is going to come alive.”

The Parker Space Probe will not have another good look at the night side of Venus until the final flyby in November 2024.

Dr. Wood noted a historical symmetry to his Venus findings. In 1962, the first successful interplanetary probe, NASA’s Mariner 2 mission to Venus, confirmed the existence of the solar wind. That was a prediction of Eugene Parker, an astrophysicist who is the namesake of the mission he now works on.

“I just find it fascinating that this connection between Venus research and solar wind research has been there from the beginning,” Dr. Wood said.