US resident sought by China for comments freed in Dubai 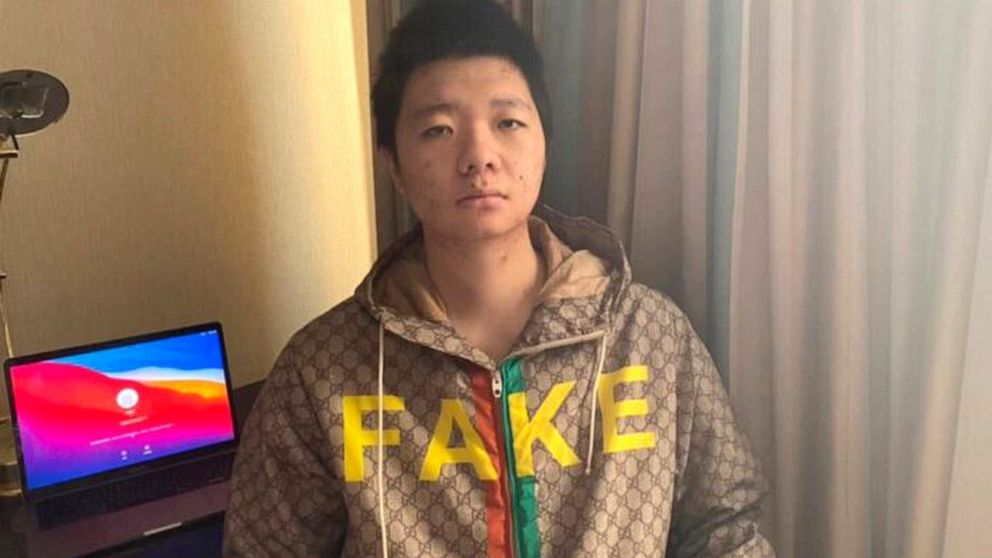 DUBAI, United Arab Emirates — A permanent resident of the United States wanted by China was freed by Dubai on Thursday, taking off on a flight to Turkey after spending weeks in detention.

Beijing had sought Wang Jingyu over his online comments about a deadly confrontation between Chinese and Indian forces last year.

Activists and his supporters say plainclothes police officers arrested the 19-year-old student as he came off an Emirates flight in April at Dubai International Airport, trying to connect on to New York. The State Department acknowledged his arrest, described the case as a “human rights” concern and warned that he could have faced extradition to China.

He was freed just hours after The Associated Press began asking questions about his case.

Wang’s case comes as the United Arab Emirates, long a U.S. defense partner in the Mideast, has drawn closer to China in recent years in trade and in efforts to combat the coronavirus pandemic. That already has sparked concerns among American officials amid what experts refer to as a looming “great powers conflict” the U.S. faces with China and Russia.

“We remain alarmed by human rights violations and abuses in China and call on (Chinese) authorities to respect the fundamental freedoms to which their citizens are entitled consistent with China’s international obligations and commitments,” the State Department told the AP.

Chinese diplomats in the Emirates did not immediately respond to requests for comment. The Chinese Foreign Ministry also has not responded to requests about Wang.

Wang spoke via a video call from an Emirates flight, showing his ticket back to Istanbul.

“The police here are very bad,” Wang said. “Today, they suddenly brought me on the plane. They didn’t even give me back my clothes or shoes, and they gave me these flip flops to wear. They didn’t give me anything, just a passport and a phone. They’re really too awful. Too awful.”

Wang came to authorities’ attention last year after brutal hand-to-hand combat between Chinese and Indian forces in a valley in the Karakoram mountains, a region disputed following a 1962 war between the two countries. In June, soldiers armed with clubs, stones and fists battled each other for hours in violence that killed 20 Indian soldiers.

Months later, in February, China acknowledged the fighting killed four of its own soldiers. Wang then publicly questioned on social media why the Chinese government waited six months to release the information, sparking a harassment campaign that saw him flee to Istanbul, activists say.

Police in Wang’s hometown of Chongqing reportedly have cited him for violating a 2018 law against demeaning heroes and martyrs and called his parents in for questioning. While en route from Istanbul to New York, activists say authorities arrested him on April 6 at Dubai International Airport, holding him first at an immigration jail and later at another at a police station.

“While in custody, Wang has been questioned by Dubai police for endangering national security, and has, according to his statements, been visited by both Chinese Embassy (Abu Dhabi) and Consulate (Dubai) staff repeatedly,” the rights group Safeguard Defenders said in a letter Wednesday to the UAE’s ambassador to the U.S.

They “pressured him to sign a document allowing him to be deported back to China, where he is wanted for what can only be described as freedom of speech crimes,” the letter added.

A Dubai Public Prosecution charge sheet obtained by the AP describes Wang as facing an investigation over allegedly “insulting one of the monotheistic religions,” a charge typically referring to insulting Islam. However, the government’s Dubai Media Office initially told the AP that Wang instead had been arrested for “non-payment of hotel bills” and denied he faced any charge for insulting Islam.

Shown the charge sheet, the Dubai Media Office then said Wang had faced the insult charge later, but “hotel payments were settled and charges were dropped and he was let free.”

The State Department said it had been “actively seeking information” on Wang’s case as he could have been deported to China.

“We actively discourage foreign governments from embracing the tactic of menacing journalists and dissidents overseas and will continue to make clear to partners and adversaries alike that this increasingly prevalent practice must end,” the State Department said. “Freedom of expression should never be criminalized.”

The UAE, a federation of seven sheikhdoms on the Arabian Peninsula, maintains close economic ties with China. Over 4,000 Chinese companies operate in the UAE across its economic free zones, with roadwork projects noticeably involving Chinese state construction firms. The UAE imported $40 billion in goods from China and exported $9.3 billion to it in 2019 alone, according to United Nations trade data. Dubai’s Jebel Ali port remains an important transshipment point for Chinese goods to the world.

The U.S. also maintains close defense ties to the UAE. Some 3,500 American troops operate in the country, including at Abu Dhabi’s Al-Dhafra Air Base. Jebel Ali is the U.S. Navy’s busiest port of call outside of America. The U.S. also plans a $23 billion arms sale to the UAE, including advanced F-35 stealth jet fighters, after Abu Dhabi recognized Israel.

China’s influence in the UAE, however, has increasingly come under American scrutiny.

Since the coronavirus pandemic, the UAE relied heavily on Chinese vaccines for its initial inoculations amid questions about its efficacy. U.S. diplomats and security officials privately warned the state of Nevada not to use Chinese-made coronavirus test kits donated by the United Arab Emirates over concerns about patient privacy, test accuracy and Chinese government involvement.