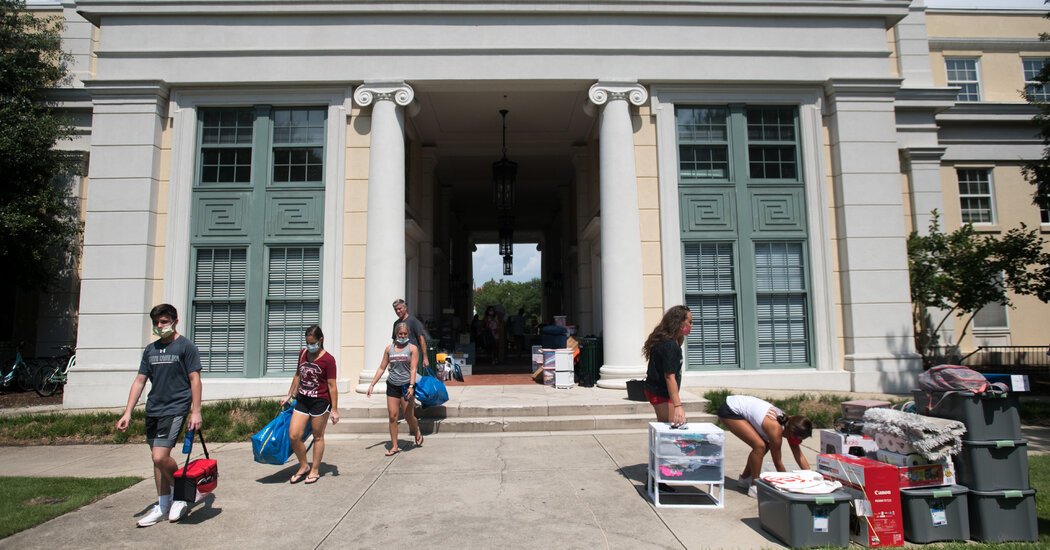 The University of South Carolina took disciplinary action on Monday against more than a dozen students and several Greek life organizations that administrators said recently hosted parties or large gatherings, as the number of cases of the coronavirus on campus rises.

The university announced that 15 students had been placed under interim suspension and that six Greek houses had been charged with student conduct violations stemming from the parties, which officials said violated emergency orders in Columbia, S.C.

Administrators did not release the names of the students. They also did not say which fraternities or sororities had been reprimanded.

The action came as nearly half of the fraternity and sorority chapter houses in the university’s Greek Village — nine of 20 — were placed under a 14-day quarantine after some students in those houses tested positive for the virus, administrators said.

Bob Caslen, the university’s president, admonished the actions of the students in a message to the university’s faculty and staff that will be sent out Tuesday morning. Part of the message was provided to The New York Times.

“Our total number of active cases is larger than we expected at this point, and some student behavior off campus is both disappointing and unacceptable,” Mr. Caslen wrote.

There were 553 active cases of the virus among students as of Aug. 27, according to the university, which has 35,364 students enrolled at its main campus in Columbia.

The university, the largest in South Carolina, joins a growing list of higher learning institutions that have been troubled by clusters of new virus cases during the first few weeks that students returned to campus. Several of them have attributed outbreaks to students’ parties that defied mask requirements and social distancing rules.

The University of North Carolina was forced to shut down in-person classes and go to online instruction in mid-August after the positivity rate — the proportion of infections to tests conducted — reached nearly 14 percent at the campus health center.

The University of Notre Dame in South Bend, Ind., and Temple University in Philadelphia paused in-person classes for two weeks after an uptick in cases.

And Syracuse University recently placed 23 students under interim suspension for violating campus safety rules, including taking part in a large gathering on the quad, conduct that officials called reckless.

Officials at the University of South Carolina said that the six Greek chapters that were reprimanded won’t be allowed to participate in campus activities until their cases are adjudicated through the Office of Student Conduct.

Fraternity and sorority members who tested positive for the virus have the option to return home for the duration of the quarantine, said administrators, who added that Greek chapter members were not the only ones engaging in risky behavior.

Hundreds of students were photographed carousing without masks at a crowded pool party on Saturday near the university, in an event that the Columbia Fire Department broke up, the newspaper The State reported.

“It was almost like Mardi Gras,” Aubrey D. Jenkins, the city’s fire chief, told the newspaper.

A spokesman for the university, Jeffrey G. Stensland, wrote in an email on Monday that the disciplinary action was not related to the pool party and that the city did not issue any citations in response to the party that the university could act upon.

“Most students are doing the right things and abiding by safe public health guidelines, but we want to be proactive and take disciplinary measures when possible against those who aren’t,” Mr. Stensland wrote. “We are conducting extensive contact tracing and do know that some of these larger events contribute to community spread.”